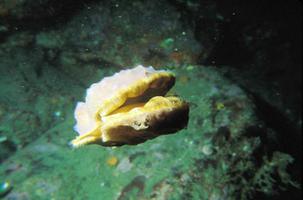 Scallop is a bivalve (hinged shell) mollusc of suborder Pectinina. Scallops are found in all seas. Their rounded or fan-shaped shells are among the most beautiful and colourful of mollusc shells. Larger species are fished worldwide. Scallops usually lie free on the bottom, or may be attached to a solid object by byssal threads (tough filaments secreted by the scallop) or cementlike substance. Many species are present in all Canadian seas, but only sea scallops (Placopecten magellanicus) occur in sufficient numbers to be trawled off the East Coast. Weathervane scallops (Patinopecten caurinus) are sporadically present on the West Coast but are usually too scarce to fish. Other species, taken recreationally on the Pacific coast, include red scallop (Chlamys rubida) and large rock scallop (Hinnites giganteus). Iceland scallop (C. islandica) is taken in small numbers on the East Coast.