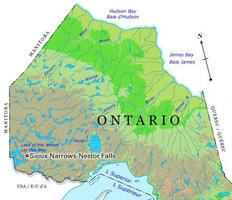 Some 500 Ojibwa currently live on the nearby Whitefish Bay Reserve. European settlement dates from the late 1920s, although previously there were numerous lumber camps in the area. The present economy depends on tourism and related services provided for a summer population of as many as 5000 vacationers.