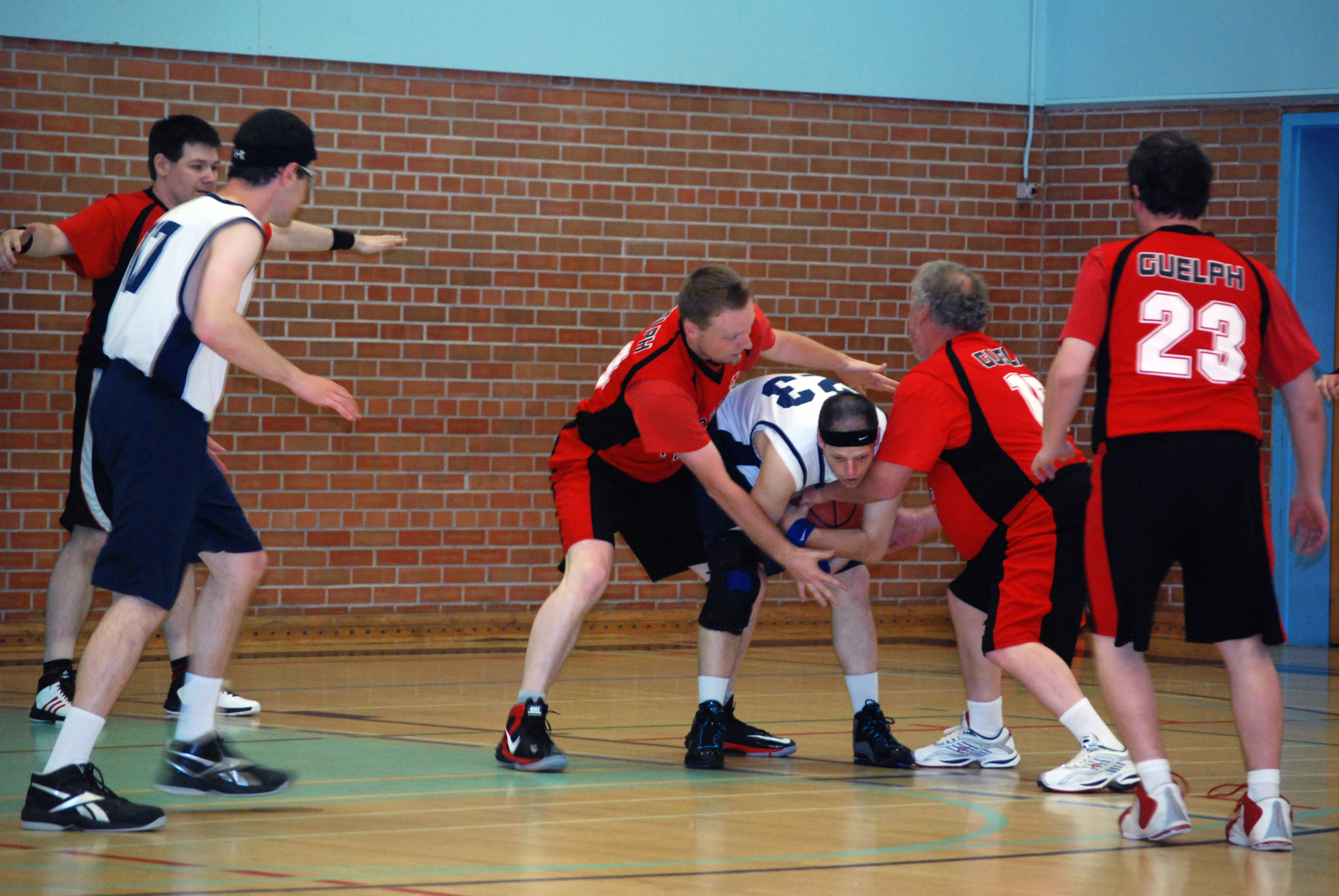 Players scrambling for the ball, during basketball match between Guelph and Kingston, in the Spring Special Olympics held May 28, 2016, in Guelph, Ontario, Canada. Photo taken on: May 28th, 2016

In the early 1960s, studies showed that people with intellectual and developmental disabilities were significantly less physically fit than people without disabilities. Although many believed that intellectual disability itself resulted in poor fitness and physical skills, Dr. Frank Hayden, a sports scientist from Windsor, Ontario, decided to test this theory.

While at the University of Toronto, Hayden researched the effects of physical conditioning and skills training on a group of students at Beverley School in inner-city Toronto as a case study. He concluded that the reason why those with intellectual disabilities were less physically fit was a lack of opportunity rather than a direct result of the disability itself. Given opportunity, they could develop the skills necessary to participate in sports and, therefore, become more physically fit. In 1964, he presented his research to the first International Congress on the Psychology of Sport in Rome and published a testing and training manual.

Similar research in the 1960s was conducted by Dr. Patricia Austin at the University of Alberta. Austin argued that physical educators should pay attention to the “forgotten child” and meet the interests, needs and capabilities of all children, including those with disabilities.

Hayden made it his mission to help provide opportunities for sports to people with intellectual disabilities and proposed and designed a national program of sports training and competition in Canada. His work caught the attention of Eunice Kennedy Shriver, sister of the late American president John F. Kennedy. In 1965, Hayden moved to Washington, D.C., where he became director of The Joseph P. Kennedy Foundation. During his seven years in Washington, he worked on playground design, developed methods for teaching sports skills to those with intellectual disabilities and helped draft legislation to assist those with disabilities. Hayden and Kennedy Shriver were also instrumental in developing the Special Olympics movement in North America by organizing the first international sporting event for people with intellectual disabilities.

Special Olympics Canada now has chapters in all provinces and territories, except Nunavut. In 1975, Saskatchewan became the first province in Canada to have an incorporated provincial Special Olympics organization. Provincial organizations were later incorporated in New Brunswick, Nova Scotia and Ontario in 1979; Manitoba, British Columbia and Alberta in 1980; Québec and the Yukon in 1981; Prince Edward Island in 1982; Newfoundland in 1986; and the Northwest Territories in 1995.

Those athletes who do well at local and/or regional competitions may qualify to compete at the Provincial Games. In turn, athletes may advance from the Provincial Games to the National Games, which occur every two years and alternate between Summer and Winter Games. The 2014 Summer Games were held in Vancouver, British Columbia, and the 2016 Winter Games took place in Corner Brook, Newfoundland and Labrador.

The best athletes at the National Games may go on to represent Canada at the World Games, which are also held every two years on an alternating basis (Summer and Winter Games). At the 2015 World Summer Games in Los Angeles, Team Canada included 115 athletes and almost 50 staff. An even larger contingent is planned for the 2017 World Winter Games in Austria, where 110 athletes will represent the country.

Mikasja Kwasie of Suriname took home gold in the long jump at the Special Olympics World Games in L.A. in 2015. Photo taken on: July 31st, 2015

There are also two special awards: The Harry Red Foster Award is presented annually to a person who exemplifies the spirit, philosophy and goals of the Special Olympics movement, and the Dr. Frank Hayden Athlete Lifetime Achievement Award is presented to an individual who has achieved athletic success throughout his or her career and exemplified the true spirit of the Special Olympics.

In 1984, Calgary Flames forwards Lanny McDonald and Jim Peplinski received awards for their volunteer work with the Special Olympics. McDonald was awarded the International Special Olympics Award for Distinguished Service, and Peplinski was awarded the Charlie Conacher Humanitarian Award, which is presented to the NHL player who exhibits outstanding humanitarian and public service contributions.

In 1989, New York Islanders forward Bryan Trottier of Val Marie, Saskatchewan, won the King Clancy Memorial Trophy for his volunteerism with the Special Olympics movement. The award is presented to the player who exemplifies leadership qualities on and off the ice and has made a humanitarian contribution to the community.

Tewksbury, Le May Doan and Salé are part of the Special Olympics Canada Champions Network, which was launched on 11 July 2014 to help raise awareness of Special Olympics programs across Canada.

In Conversation with Dr. Frank Hayden