Spirit bears are rare white- or cream-coated black bears whose colouration is caused by a genetic trait that is uncommon within coastal black bears. Their entire coat is white, from the roots to the tips of their hair. However, they are not albinos and as a result have dark eyes and noses similar to black-coated black bears. Their unique colouration is caused by a rare variation at the Mc1r gene (melanocortin 1 receptor), which is involved in melanin production, or the pigment responsible for skin, hair and eye colour. This is the same gene that controls for red hair in humans and blond coats in Labrador retrievers.

DID YOU KNOW?
An allele is a specific variation of a gene, or the part of a cell that determines physical characteristics. Each mammal carries two alleles, one from the mother and one from the father. Some alleles are dominant and some recessive. Dominant alleles trump recessive ones. For example, a baby black bear might inherit an allele for a black coat from its mother and an allele for a white coat from its father. Since the allele for a black coat is dominant and white recessive, the cub would have a black coat. In order for a recessive trait to manifest — in this case, a white coat — the cub must receive a copy of the recessive allele from both parents.


At full size, spirit bears weigh about 80–200 kg, with females weighing less than males. They measure 60–90 cm at the shoulder and are approximately 120–190 cm long. Spirit bears can live for approximately 25 years in the wild.

Although known to local First Nations who have cohabited with spirit bears for thousands of years, spirit bears were not described to the scientific community until 1905. In this year, American zoologist William Hornaday described the subspecies (originally incorrectly identified as a separate species), and named it after his colleague Frank Kermode, the curator of the Provincial Museum in Victoria, British Columbia. Although technically the term Kermode bear describes both the black-coated black bears and spirit bears of this subspecies, in popular writing and conversation “Kermode bear” is most often referring only to white-coated spirit bears.

Spirit bears appear to have been historically present throughout their current distribution as they are featured in the longstanding oral traditions of coastal First Nations. Genetic analyses suggest that spirit bears are part of the common lineage of the coastal black bear subspecies that likely lived in ice-free regions on the continental shelf during the Pleistocene ice age. Further research concludes that the white coat colour has likely been maintained by some combination of genetic isolation, small population size, selective advantage (e.g. the relative ease with which they catch salmon), and possibly non-random mating (spirit bears prefer to mate with other spirit bears). 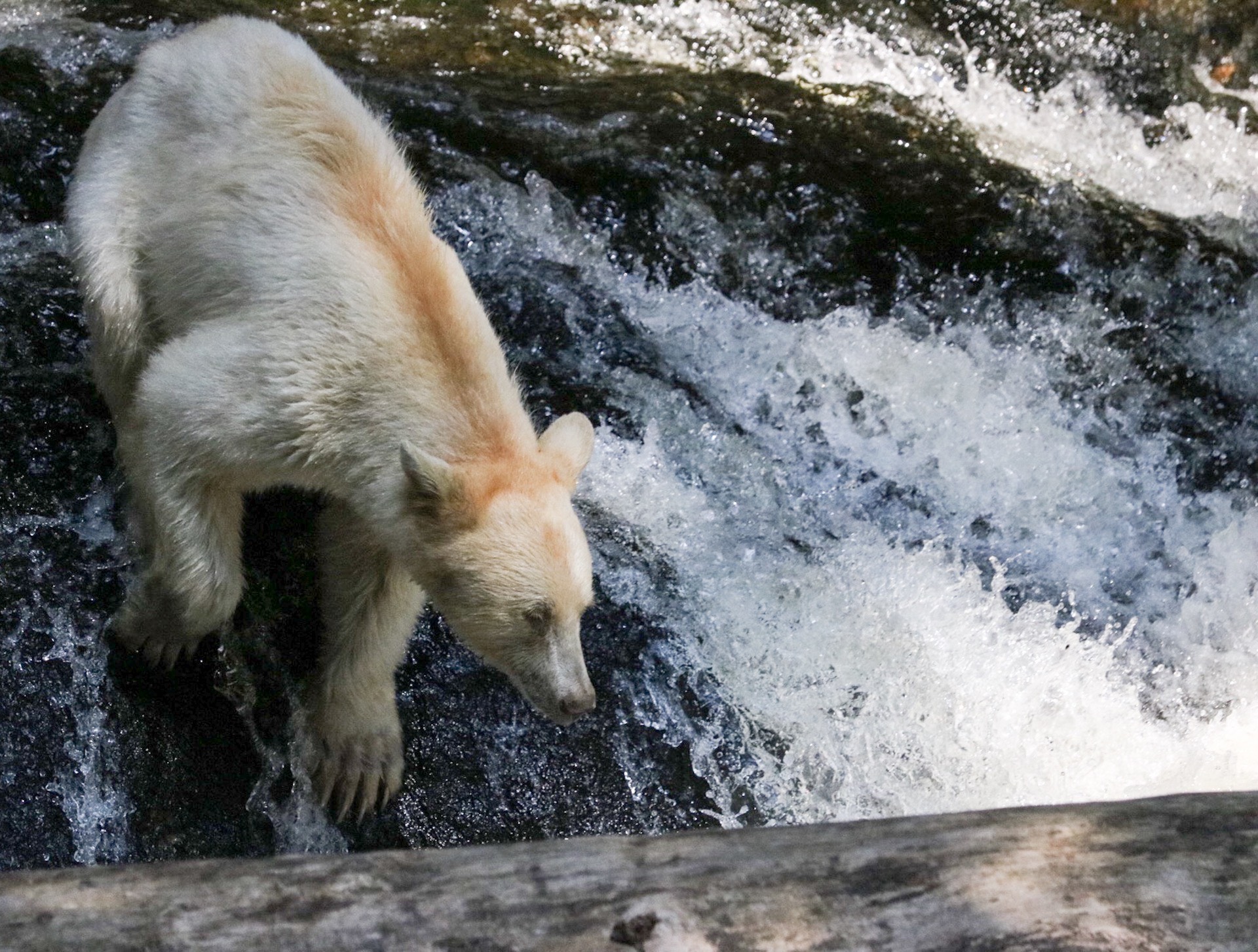 A spirit bear wades through a stream in British Columbia's Great Bear Rainforest.

The kermodei subspecies of Ursus americanus, which is the only subspecies known to regularly demonstrate spirit bear colouration, lives in Northwestern British Columbia, from the Nass Basin to Burke Channel. The highest concentration of spirit bears are found in the Great Bear Rainforest on Gribbell and Princess Royal islands, where about 43 and 17 per cent of bears are white respectively. On the mainland, the area around Terrace is also known to be a spirit bear hotspot.

These coastal, forested habitats are the same as those preferred by black-coated black bears. Each fall, spirit bears excavate a den to occupy during their winter sleep which occurs between November and March. In similar coastal systems, it has been found that black bears prefer dens made in old-growth western red or yellow cedar trees between 250 and 700 m in elevation.

The total number of spirit bears across their entire range is unknown. Population estimates of spirit bears in the Northwest Coast island portion of their distribution in British Columbia vary, from 100 to 200, up to 220–310.

Similar to all other black bears, spirit bears are omnivores, meaning they consume both animals and plants. Their diets vastly vary, depending on the bears’ location and the seasonality of food sources. Based on availability, their diet may consist of berries, grasses, plants, insects, carrion, intertidal organisms (e.g. barnacles, clams, mussels, urchins, etc.), moose and deer fawns, and spawning salmon. During spring, they primarily eat emerging vegetation such as skunk cabbage and sedge, at low elevations such as in estuaries and wetlands. Throughout the summer, they will eat numerous berry species as they emerge, including blueberries, huckleberries and salmonberries. In the fall, spawning Pacific salmon (Oncorhynchus) are an important component of coastal bears’ diet, as they serve as an energy-rich food, critical before winter sleep. Male coastal black bears eat more salmon than female bears.

Some research has shown that spirit bears have greater success at fishing for salmon during the day than black-coated black bears. It is suggested that this advantage is due to the lack of contrast of a white coat with the grey sky, compared to a black coat, from the fish’s perspective. Indeed, preliminary evidence indicates that on Gribbell Island spirit bears consume more marine resources than black-coated black bears.

Black bears, white and black coated alike, mate from mid-May to mid-July. Females become sexually mature between three and four years of age. Despite mating in early summer, the embryo does not implant in the uterus of the female until late fall. One to three cubs are born naked and weighing approximately 400 g, during their winter sleep period in January or February. Mothers and cubs emerge from their dens between March and April. Cubs are weaned at about eight months, but may stay with their mother for as long as a year-and-a-half.

Like most coastal bears, spirit bears play an important role in coastal ecosystems as they bring salmon from rivers into the forest to eat. The leftover remains of the salmon are then available for other animals that eat salmon (e.g. eagles, minks, etc.) and can also act as a fertilizer for the trees and plants of the forest. This act of salmon fertilization can structure the types of plants, insects and even songbirds that grow in forests with these salmon–bear relationships.

Spirit bears are deeply respected by the Tsimshian First Nations who share their traditional territory with spirit bears. Referred to as moksgm’ol in Tsimshian languages, several cultural stories exist around the spirit bears. One story describes Raven creating spirit bears as a reminder of the last ice age that previously covered its habitat with ice and snow. In modern times, spirit bears are becoming an important focal species for Indigenous-owned ecotourism.

Since the mid-20th century, it has been illegal to hunt spirit bears in British Columbia. Before this time however, the white coats of spirit bears were highly prized by trophy hunters and museum collectors, leading to an increase in hunting and trapping by fur traders.

In 2006, the Spirit bear was adopted as the provincial mammal of British Columbia.

Spirit bears thrive in healthy coastal ecosystems. As such, threats to old-growth trees through forestry and to the salmon population from commercial fisheries may harm the spirit bear population. Similarly, contamination of intertidal prey through oil spills may also put spirit bears at risk.