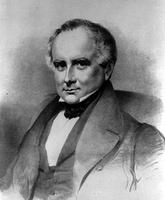 Thomas Chandler Haliburton, author, judge, politician (b at Windsor, NS 17 Dec 1796; d at Isleworth, Eng 27 Aug 1865). Haliburton was a born Tory, whose father and grandfather had been lawyers and judges. An Anglican, he was educated at King's Collegiate School and King's College, Windsor, NS. Following graduation in 1815 he studied law and was admitted to the bar in 1820. Gregarious and ambitious, he soon founded a law practice in Annapolis Royal and established a sufficient local reputation to become an MLA in 1826. Three years later he was elevated to the bench. In 1854 he was appointed to the NS Supreme Court but retired 2 years later because of ill health. While a judge, and in addition to his family and social life and his writing, Haliburton was an active businessman. He relinquished direct participation in his business endeavours when he moved to England following his retirement from the bench. There Haliburton settled at Isleworth and in 1859 became the Tory MP for Launceston. He retired from politics in England in 1865.

Haliburton's reputation lies in the many substantial works in provincial history, political pamphlets and fiction that he wrote from 1823 to 1860. His first book was published in 1823 when he was 27. A General Description of Nova Scotia (1823) was followed by a more ambitious, 2-volume work, An Historical and Statistical Account of Nova Scotia (1829). His other historical writings include The English in America (1851) and Rule and Misrule of the English in America (1851). Two political works also demonstrate Haliburton's lifelong interest in Canadian affairs: The Bubbles of Canada (1839) and a shorter pamphlet, A Reply to the Report of the Earl of Durham (1839).

Perhaps Haliburton's finest and most enduring work is The Old Judge; or Life in a Colony (1849). This work reveals Haliburton in a more sombre and reflective mood as he states with genuine feeling his farewell to Nova Scotia. The Old Judge lacks the wisecracking observations that made the adventures of Sam Slick so readable, but it is balanced and marked by a maturity not always present in Haliburton's other writings.

Like his fellow Nova Scotians, Thomas McCulloch and John Young ("Agricola"), Haliburton provoked Nova Scotians to better themselves in agriculture and business to combat the depression of the 1820s. Despite his initial debt to McCulloch, he extended his writings to fight the political situation both at home and in England. The Clockmaker has been described as "a series of moral essays pointed by satire." There can be no doubt about Haliburton's extraordinary ability as a writer of social satire, which was heightened by his ear for local idiom, dialect and anecdote. No full bibliographical study of Haliburton's career has yet been made, nor is there a book-length biography.