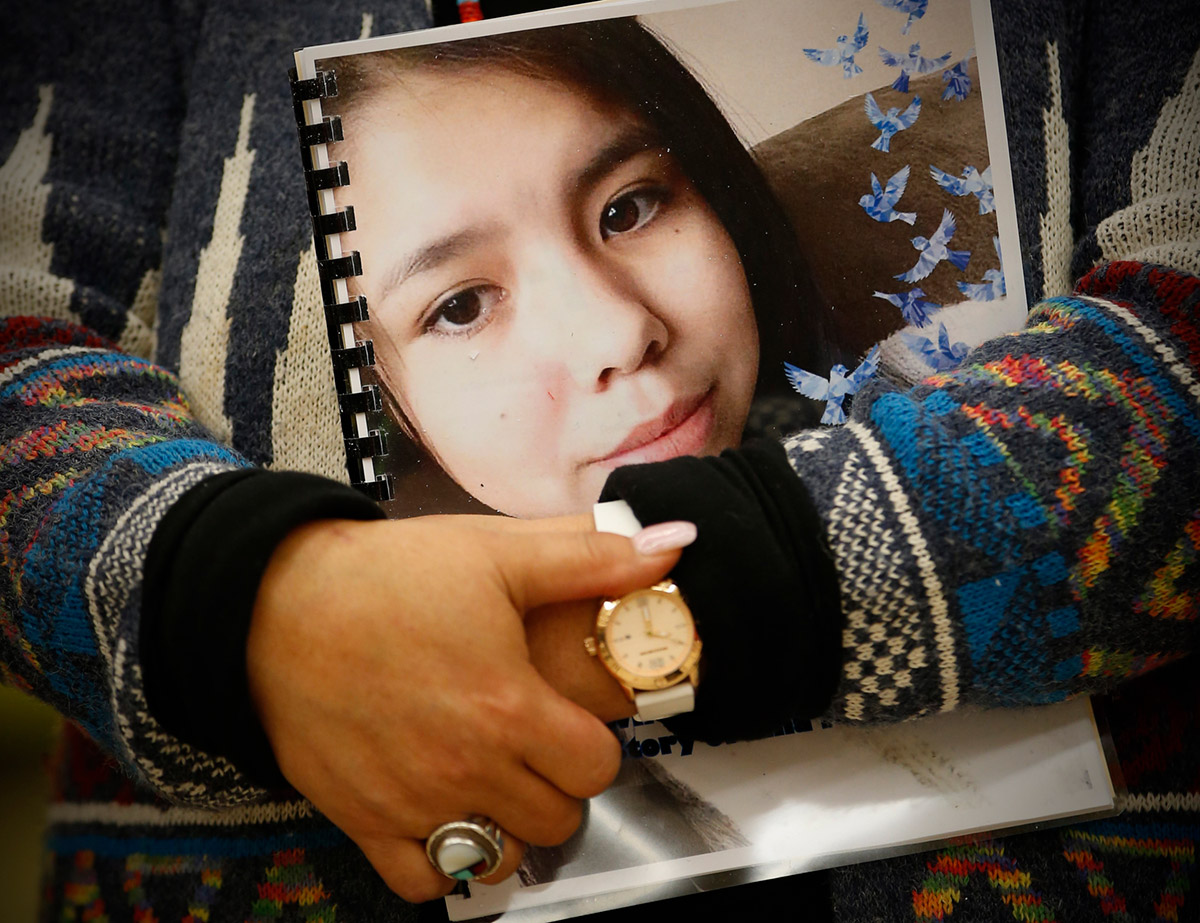 Sagkeeng councillor Marilyn Courchene holds the report (with photo of Tina Fontaine on the cover) as Daphne Penrose, the Manitoba Advocate for Children and Youth, releases a special report on the death of fifteen-year-old Tina Fontaine at the Sagkeeng Mino Pimatiziwin Family Treatment Centre on the Sagkeeng First Nation, Manitoba, Tuesday, March 12, 2019 (THE CANADIAN PRESS/John Woods).

Tina Fontaine was born on 1 January 1999 in Winnipeg, Manitoba, to Eugene Fontaine from the Sagkeeng First Nation in Fort Alexander, Manitoba, and Valentina (Tina) Duck from the Bloodvein First Nation, north of Winnipeg.

Tina Fontaine had seven siblings. After a brief time living in a Winnipeg foster home, she moved in with her great-aunt and great-uncle Thelma and Joseph Favel in November 2004, whom she called “grandma” and “grandpa.” Fontaine lived with them for almost a decade in Powerview-Pine Falls, Manitoba (next to Sagkeeng First Nation), except for a brief stay in Selkirk, Manitoba.

Fontaine loved school and did well there, says her great-aunt. She had a big heart and loved children, often playing games with them. Thelma Favel called Fontaine “the perfect little girl.”

In 2011, Tina’s dad was beaten to death. Afterwards, she received no counselling and struggled with grief and addiction.

In early 2014, Tina Fontaine went to Winnipeg to visit her mother, Tina Duck. By that time, Duck had lost custody of her kids as a result of working in the sex trade and struggling with alcoholism.

When Fontaine went to see Duck again on 1 July 2014, her great-aunt Thelma Favel gave her about $50 and a calling card. That was the last time Favel saw Fontaine alive.

On 17 and 18 July 2014, Tina Fontaine was under Child and Family Services (CFS) care in Winnipeg, housed at a downtown hotel (no other emergency placement was available). According to A Place Where it Feels Like Home: The Story of Tina Fontaine (Manitoba Advocate for Children and Youth special report, published March 2019), Tina was placed in CFS care “not because she was missing and had been located, but because WPS [Winnipeg Police Service] received a call that Tina was screaming for help as she was being dragged by an older male down Selkirk Avenue by her arm.” However, “no planning, assessment, or support occurred at this time,” and Tina was discharged from the hotel on 18 July.

From 23 to 29 July, Fontaine stayed at Ndinawe, a youth temporary shelter, but her bed was given away to another vulnerable young person after Fontaine missed her curfew a second time.

A missing person report for Fontaine was filed on 31 July 2014 by the Winnipeg Police Service (WPS). At 5:15 a.m. on 8 August, Fontaine was the passenger in a vehicle stopped by WPS. Though she was the subject a missing person report, Fontaine was let go by police after they checked her record. Hours later, she was found unconscious near the University of Winnipeg in an alleyway associated with sexual exploitation. After paramedics woke her, she was taken to the Health Sciences Centre and medically cleared for discharge. While at the hospital, Fontaine mentioned to her CFS worker that she had been associating with a 62-year-old man named Raymond Cormier. Fontaine’s CFS worker took her to a downtown hotel, where she was approved to stay; however, Fontaine left soon after.

She was last seen in downtown Winnipeg on 9 August, walking down the street with a male.

Eight days later, on 17 August, Fontaine’s body, wrapped in a plastic bag and duvet cover and weighed down with rocks, was pulled from Winnipeg’s Red River near the Alexander Docks. She was 15.

To this day, her cause of death remains undetermined.

In December 2015, the Winnipeg Police Service charged Raymond Cormier, 53, with second-degree murder in Fontaine’s death. He pleaded not guilty.

His trial began on 29 January 2018. Witness Tyrell Morrison testified that the last time he saw Fontaine, she was arguing with Cormier because he had sold her bicycle frame for drugs.

The Crown offered no forensic evidence or eyewitnesses to directly connect Cormier to Fontaine’s death. The largely circumstantial case hinged on the suspect’s statements secretly recorded during a police sting operation. Although the defence did not present any evidence, Cormier’s lawyer Tony Kavanagh said in his closing remarks that because the jury could not confirm that Fontaine died as a result of an unlawful act, Cormier should be acquitted “on that alone.”

The jury reached a verdict on 22 February 2018. Cormier was acquitted of second-degree murder.

Within minutes, Manitoba Indigenous leaders criticized governmental systems for not protecting Fontaine. “We as a nation need to do better for our young people,” said Keewatinowi Okimakanak grand chief Sheila North. “We’ve all failed her.”

Carolyn Bennett, federal Crown-Indigenous Relations Minister, tweeted: “Tina’s is a tragic story that demonstrates the failures of all the systems for Indigenous children and youth on every level…we need to fix this.”

One day after the trial ended, more than a thousand people marched in Winnipeg to honour Fontaine and support her family.

On 13 March 2018, Crown prosecutors announced that they would not appeal the case.

Tina Fontaine’s death prompted national outrage and resulted in an in-depth scrutiny of children placed in government care in Manitoba. The Manitoba Advocate for Children and Youth’s special report, A Place Where It Feels Like Home, dedicated to Fontaine’s memory, made five recommendations including new protocols to provide appropriate responses to missing children and youth. Manitoba’s Child and Family Services (CFS) announced that as of 1 June 2015 it would no longer place children in hotels.

Fontaine’s death launched the volunteer group Drag the Red, which searches Winnipeg’s Red River bottom for bodies or evidence in missing persons or homicide cases. Tina’s death also led to the creation of the Bear Clan Patrol, which promotes safety and crime prevention in the city’s North End.

A short-term crisis intervention program for youth at risk of sexual exploitation, operated by Indigenous staff, began in Winnipeg in the fall of 2015. On 5 November 2018, the Ndinawe Youth Resource Centre, which had been operating for 25 years, was renamed “Tina’s Safe Haven” in memory of Fontaine. With federal funding, Tina’s Safe Haven began operating as a 24/7 youth drop-in centre. “This place will always be here for kids and no one can get lost now,” said Thelma Favel, Tina’s great-aunt.

Tina Fontaine is buried on the Sagkeeng First Nation reserve. 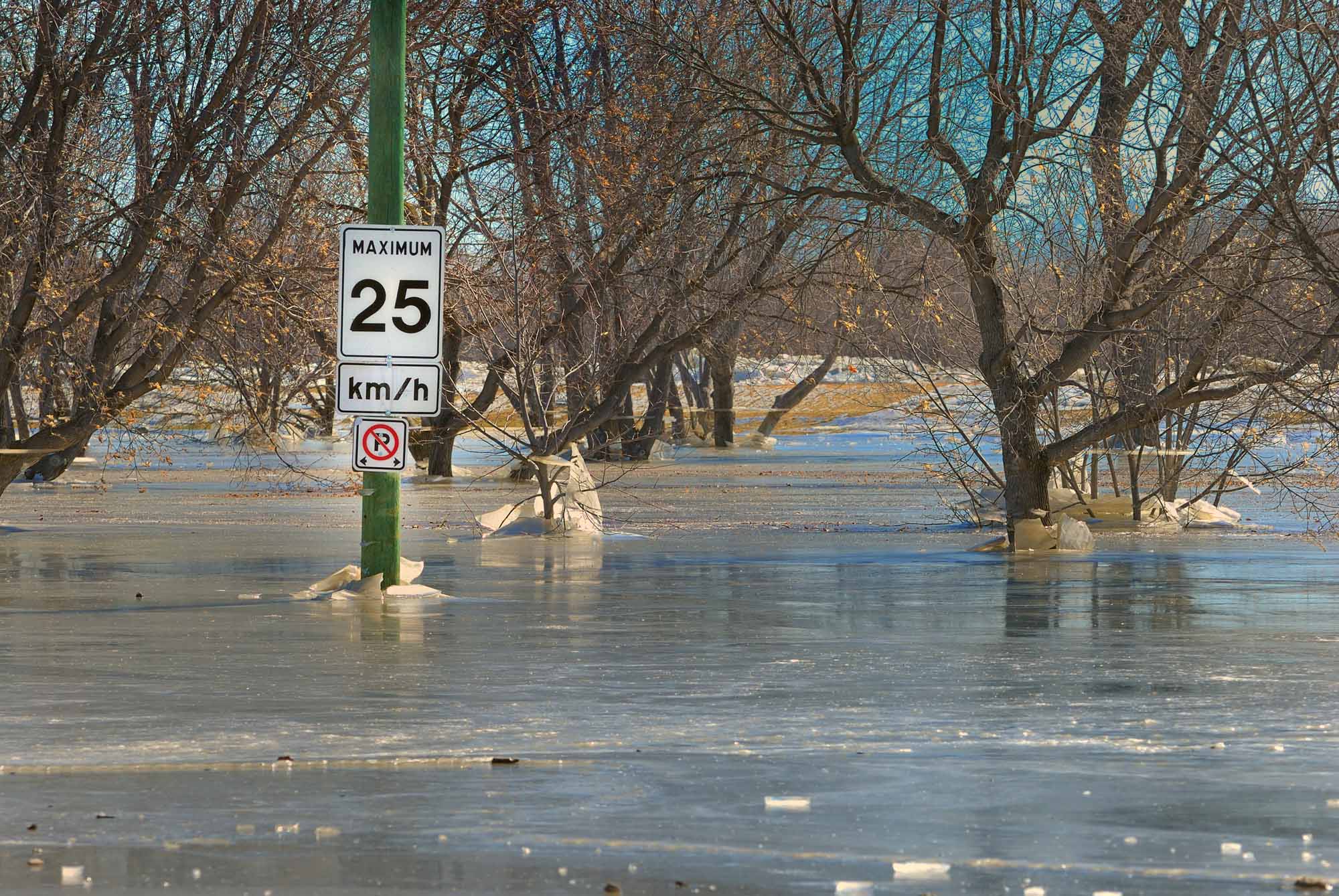