Tofino is located in the traditional territory of the Tla-o-qui-aht First Nation of the Nuu-chah-nulth peoples. First Nations have occupied the area for at least 5,000 years.

The first Europeans in the area were two explorers, Spanish captain Juan Josef Pérez Hernández in 1774 and British captain James Cook in 1778. A thriving but conflict-fraught trade soon began between the Nuu-chah-nulth and seafaring traders, the majority of whom were American and British. The First Nations exchanged sea otter pelts for goods such as firearms, alcohol and food products. Nuu-chah-nulth chiefs Maquinna and Wickananish were influential figures in this early trade.

In 1854, British colonial agent William Banfield and two business partners established a trading post on Stubbs (now Clayoquot) Island, near present-day Tofino. The first non-Indigenous community in the area grew around it. Additional settlers came to the future site of Tofino and other locations along the Esowista Peninsula starting in the 1890s.

The community at Tofino was originally called “Clayoquot townsite,” but this caused people to confuse it with the village of the same name on Stubbs Island. By 1904, locals had begun to use the name Tofino from nearby Tofino Inlet, named after Spanish rear admiral, cartographer and hydrographer Vincente Tofiño de San Miguel in 1792. The name became official with the opening of the Tofino post office in 1909.

Tofino’s first store opened in 1901 and a one-room schoolhouse for the village’s 28 children was built in 1906. A wharf and a lifeboat station were constructed in 1908 and Tofino’s first church, St. Columbia Anglican, was built in 1913. Tofino was incorporated as a municipality in 1932. 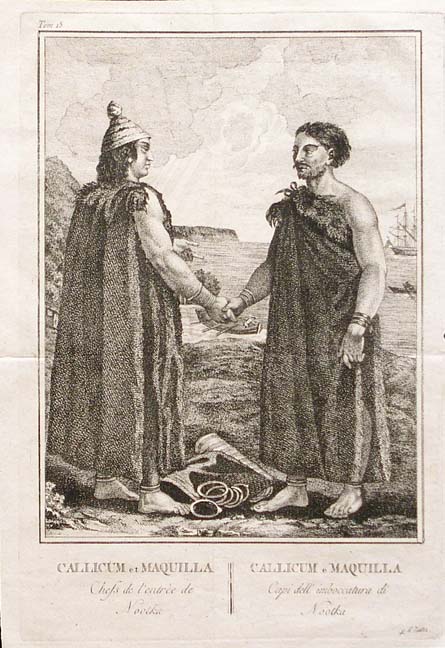 Before 1959, Tofino was a small, isolated fishing village that consisted primarily of people of English, Scottish and Norwegian descent, in addition to First Nations people.

Fishermen of Japanese descent, many of them from Steveston, on the BC mainland, began to settle in Tofino in 1923. Most of them were single men, but more and more brought their families with them as time passed. Conditions for these Japanese Canadians changed dramatically during the Second World War. In 1942, while Canada was at war with Japan, the federal government ordered the expulsion of all Japanese Canadians from the West Coast, effectively declaring them enemy aliens. Their homes and fishing boats were confiscated. At the time of the deportation, the Japanese population in Tofino totalled nearly 100 — more than one-third of the community’s entire population.

An Air Force base, RCAF Station Tofino, was built 11 km southeast of the community in late 1942. Hundreds of Allied military personnel were stationed there on a rotating basis until the base was closed in 1944. It is now the location of the Tofino airport.

A road between Tofino and Ucluelet, 40 km to the southeast, was completed during the Second World War. A gravel road connecting Tofino and Ucluelet to Port Alberni, 126 km east of Tofino, was completed in 1959. Until the construction of the road to Port Alberni, one could only travel from Tofino to the rest of Vancouver Island (and the rest of Canada) by boat, by aircraft and on foot. The road to Port Alberni was originally a logging access road with locked gates at both ends that restricted public use. The gates were removed in 1964, but the road was not completely paved until 1972.

Tofino was incorporated as a district in 1982, occupying a larger area than the former municipality.

English is the language spoken most often at home by 95.3 per cent of Tofino’s residents. People of European ancestry make up 84 per cent of the community, with 63.7 per cent of the total population declaring British Isles (English, Scottish or Irish) origins. Members of a visible minority account for 6.7 per cent, and First Nations and Métis comprise 5.7 per cent.

The once-minor logging industry flourished in the Tofino area with the completion of the Tofino–Port Alberni road in 1959. Logging represented a significant share of the local economy until the mid-1990s. Tofino and its surroundings were also the site of many protests for and against the logging industry, known as the War in the Woods, that began in 1984.

An increase in the local herring roe population — and in the demand for herring in Japan — occurred in the early 1970s. A herring processing plant was built in Tofino in 1972.

The development of the local fishing and logging industries spurred population growth. Tofino’s population more than doubled in two decades, from 461 people in 1971 to 1,103 in 1991. Commercial fishing is no longer a predominant part of Tofino’s economy, but sport fishing, whose popularity with tourists began in the 1990s, has replaced it.

The first tourists arrived in Tofino when the Canadian Pacific Railway steamship Princess Maquinna began to sail along the British Columbia coast in 1913. The Tofino Board of Trade decided in 1947 to actively promote tourism. The industry grew dramatically after the Tofino–Port Alberni road was opened to the public in 1964 and again after the Department of Indian Affairs and Northern Development established Pacific Rim National Park Reserve, immediately south of Tofino, in 1970.

Tofino has become home to a growing number of artists and craftspeople since the Gust o’ Wind Arts Centre opened in the town’s former community hall in 1974, despite its closing six years later.

Today, Tofino’s economy is primarily tourism based, with more than one million visitors arriving every year. In 2016, accommodation and food services accounted for 30 per cent of local jobs, and all tourism-related positions employed roughly 64 per cent of the community’s workforce. There are more than 1,500 accommodation units of various types in the Tofino area.

Tofino received Resort Municipality status from the British Columbia government in 2008. This designation has brought annual funding to help the community develop its resort industry.

Surfing has become a major part of the local economy since Tofino’s first surf shop opened in 1984. In 2010, Outside magazine named the community the “best surf town” in North America. More than 40 per cent of tourists to Tofino surf along the local shores. 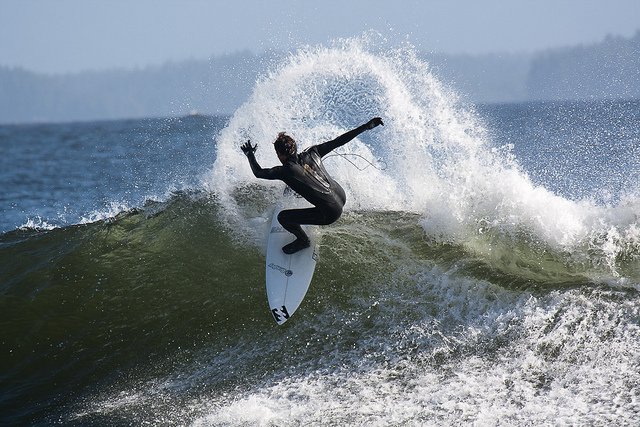 Tofino is the western terminus of British Columbia’s Highway 4 (also known as the Pacific Rim Highway).

The Tofino Bus All Island Express provides daily bus service between Tofino and communities including Nanaimo, Parksville, Port Alberni, Ucluelet, Victoria and Vancouver (via ferry). A free shuttle bus runs the length of the municipality during the summer.

There are three small docks and marinas used by fishermen and the public in Tofino. 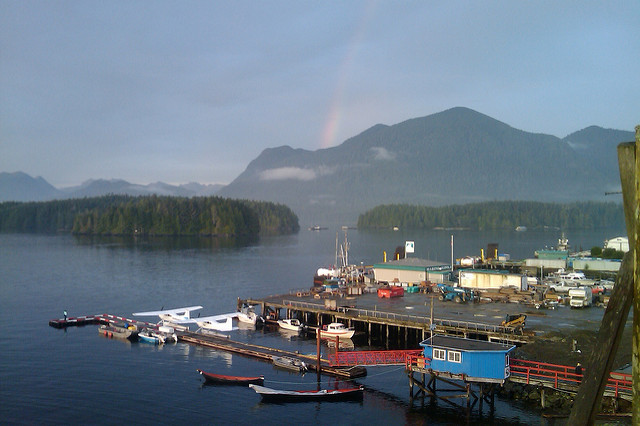 Tofino is governed by a council consisting of a mayor and six councillors, all of whom are elected at large for four-year terms (see also Municipal Government).

The municipality is located within the Clayoquot Sound Biosphere Reserve, designated in 2000 by the United Nations Educational, Scientific and Cultural Organization (UNESCO) to promote a balanced, sustainable relationship between the area’s inhabitants and ecosystems. Pacific Rim National Park Reserve, immediately south of Tofino, stretches 125 km south to Port Renfrew and is a destination for campers, hikers and surfers. There are eight smaller parks in and around Tofino, which is also home to the Tofino Botanical Gardens. 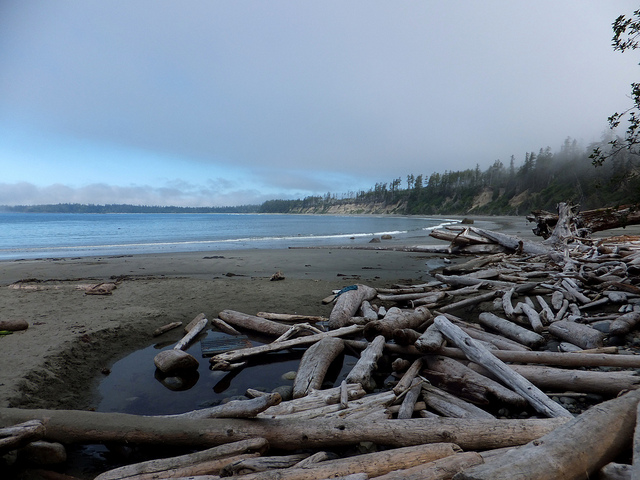 There is a public market in Tofino every Saturday from the Victoria Day long weekend until Thanksgiving. Movies are shown year-round on Monday nights at the Clayoquot Sound Community Theatre, and the West Coast Winter Music Society presents five concerts annually from November to April.

The local print and digital newspaper is the Tofino-Ucluelet Westerly News, published in Ucluelet.