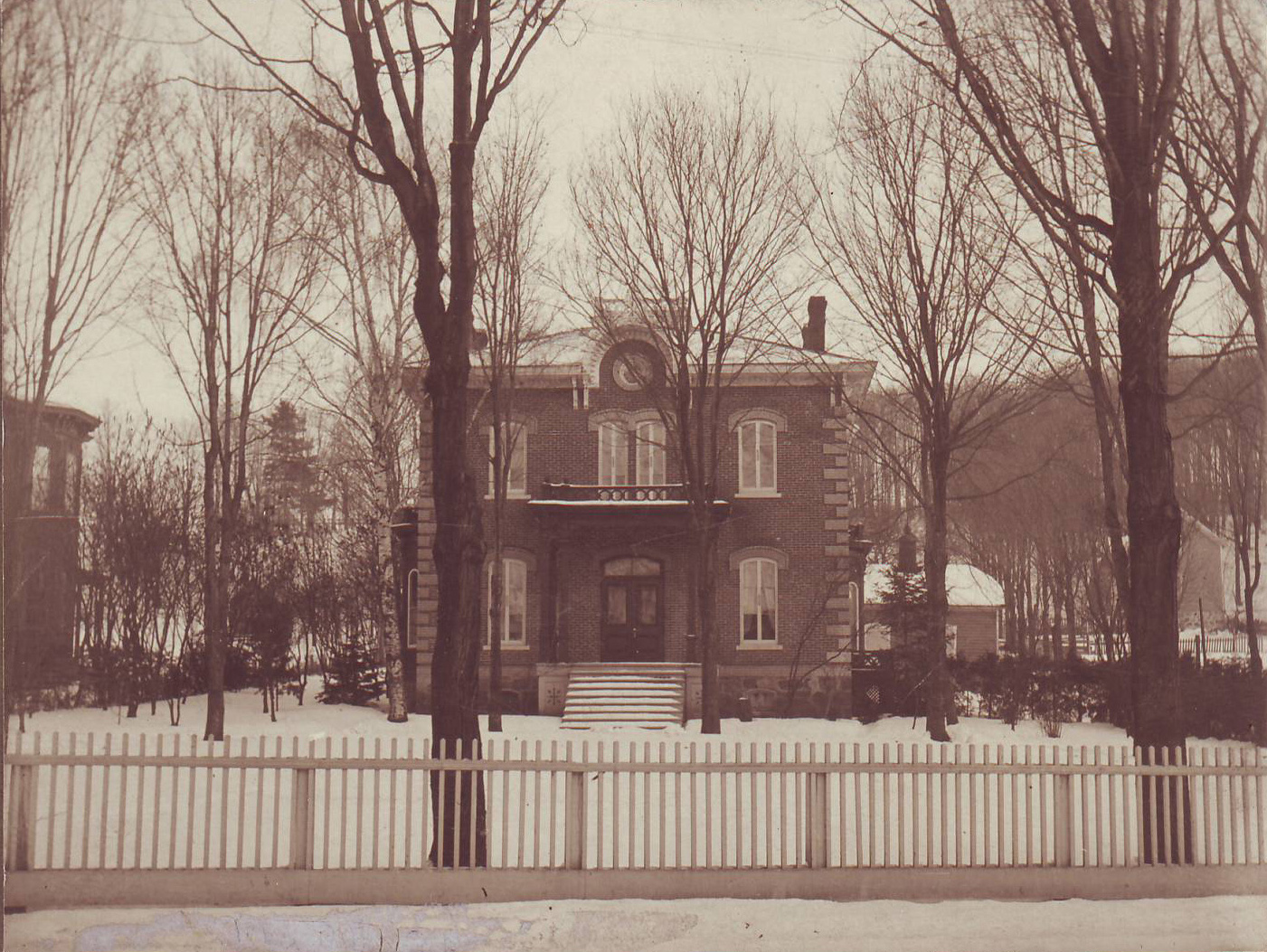 Period photograph of the Laurier house. 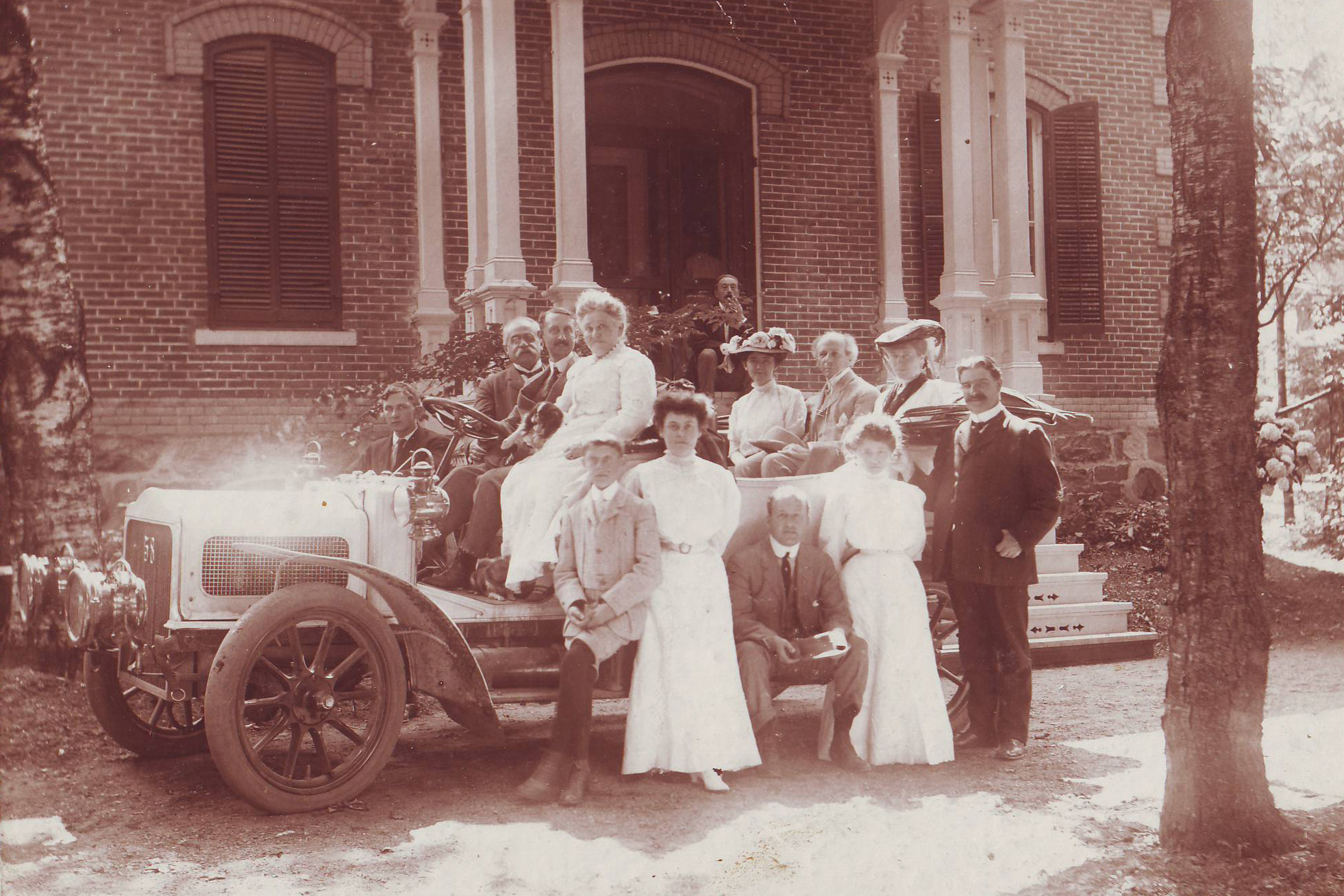 The Lauriers and their friends posing in the couple's car in front of their home in Arthabaska. 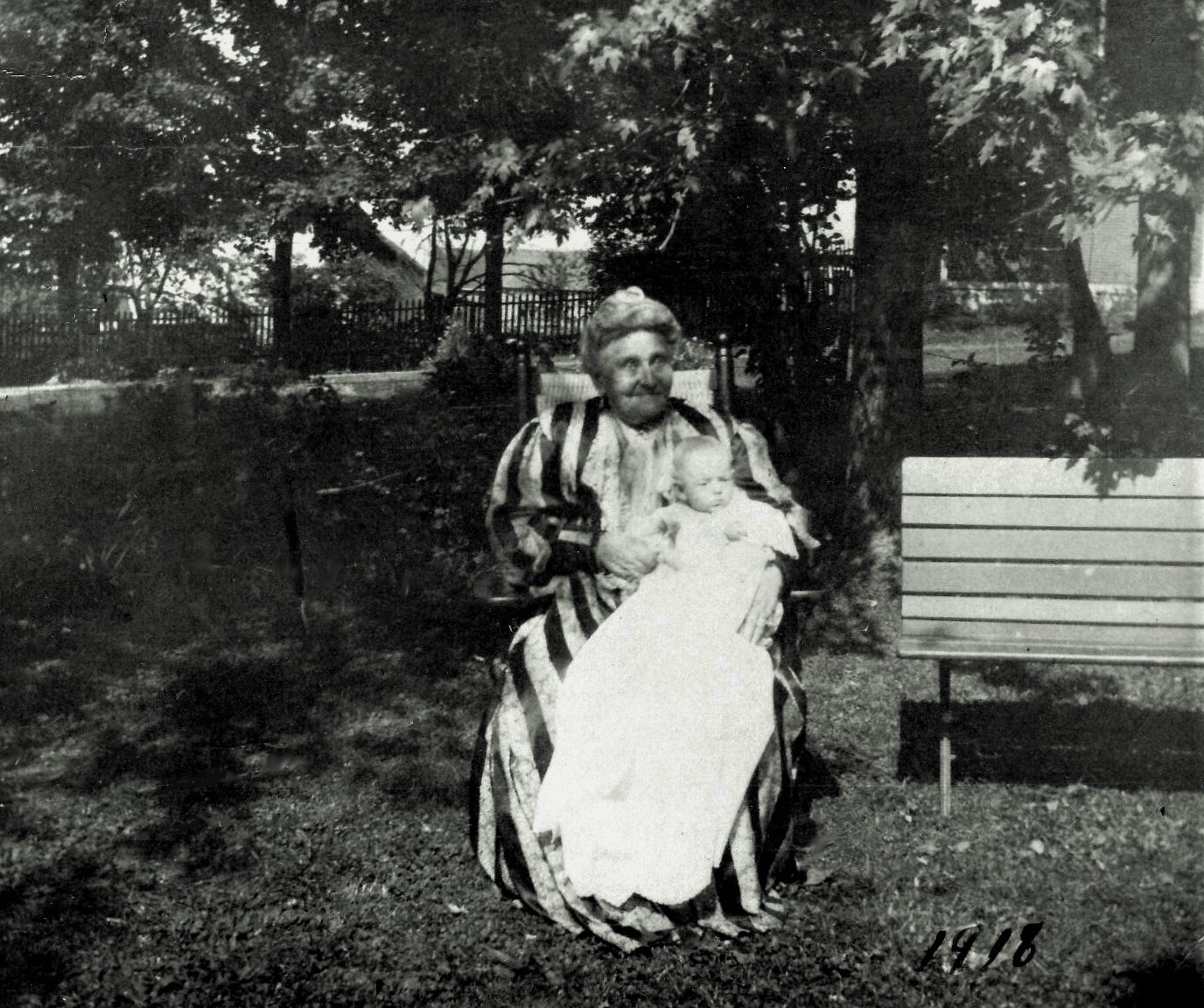 Lady Laurier posing in the backyard of her home in Arthabaska in 1918.
PreviousNext

Built in 1876 in Arthabaska, Québec, this Victorian Italianate house was the personal residence of Sir Wilfrid Laurier (1841–1919). A leading national figure of his time, Laurier was the first French Canadian and the first Catholic to become prime minister of Canada (1896 to 1911). Recognized as a National Historic Site of Canada in 1999, the house is now a museum dedicated to his memory.

History of the House

In 1876, Laurier commissioned architect Louis Caron Sr. to build a residence for the Laurier family at 16 rue de l’Église in the municipality of Arthabaska, then seat of the county of Drummond-Arthabaska, Québec. (Rue de l’Église has since been renamed rue Laurier, and Arthabaska has been amalgamated with Victoriaville, in what is now the administrative region of Centre-du-Québec.)

Laurier purchased the lot for the house from his friend Ernest Pacaud (see Le Soleil) and spent $3,000 to build it. Although Laurier’s election as a member of Parliament in 1874 had made him better off financially, he still paid this amount in several instalments. Sobriety and simplicity are the keynotes of this house, which is devoid of any superfluous exterior ornamentation. Located across the street from Laurier’s law office, the house sits on a large, well landscaped lot that extends into the foothills of Mount Arthabaska. The large veranda at the rear of the house gave Laurier and his wife Zoé (née Lafontaine) all the room they needed to enjoy the view of their garden and to entertain family and friends. 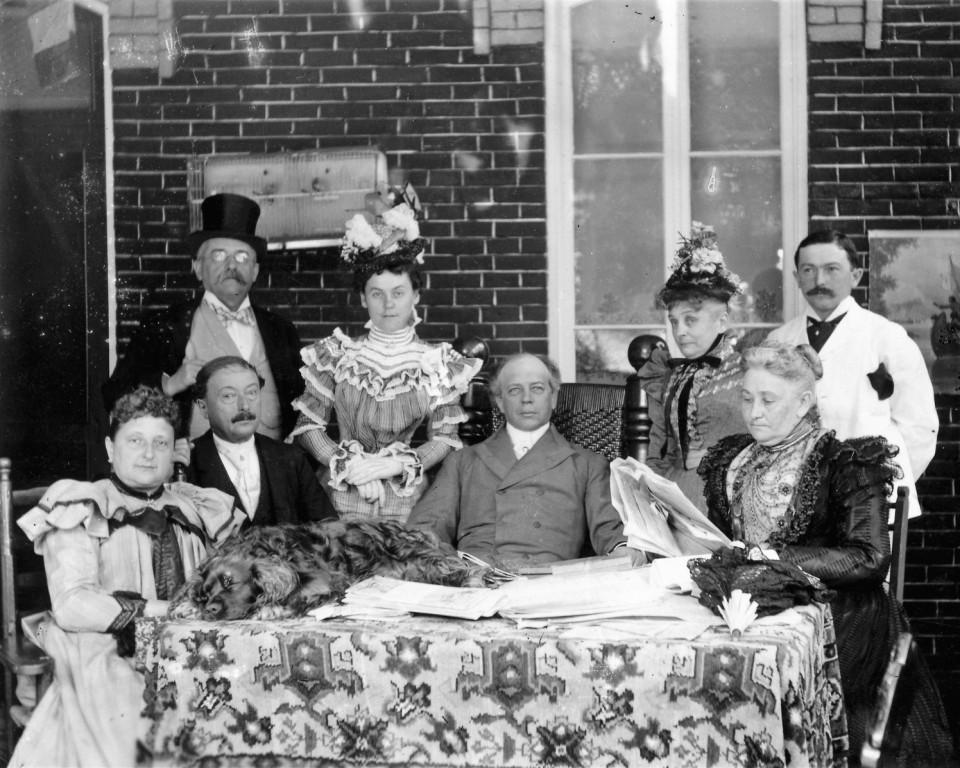 The Lauriers and their guests on the back veranda of their house in Arthabaska. 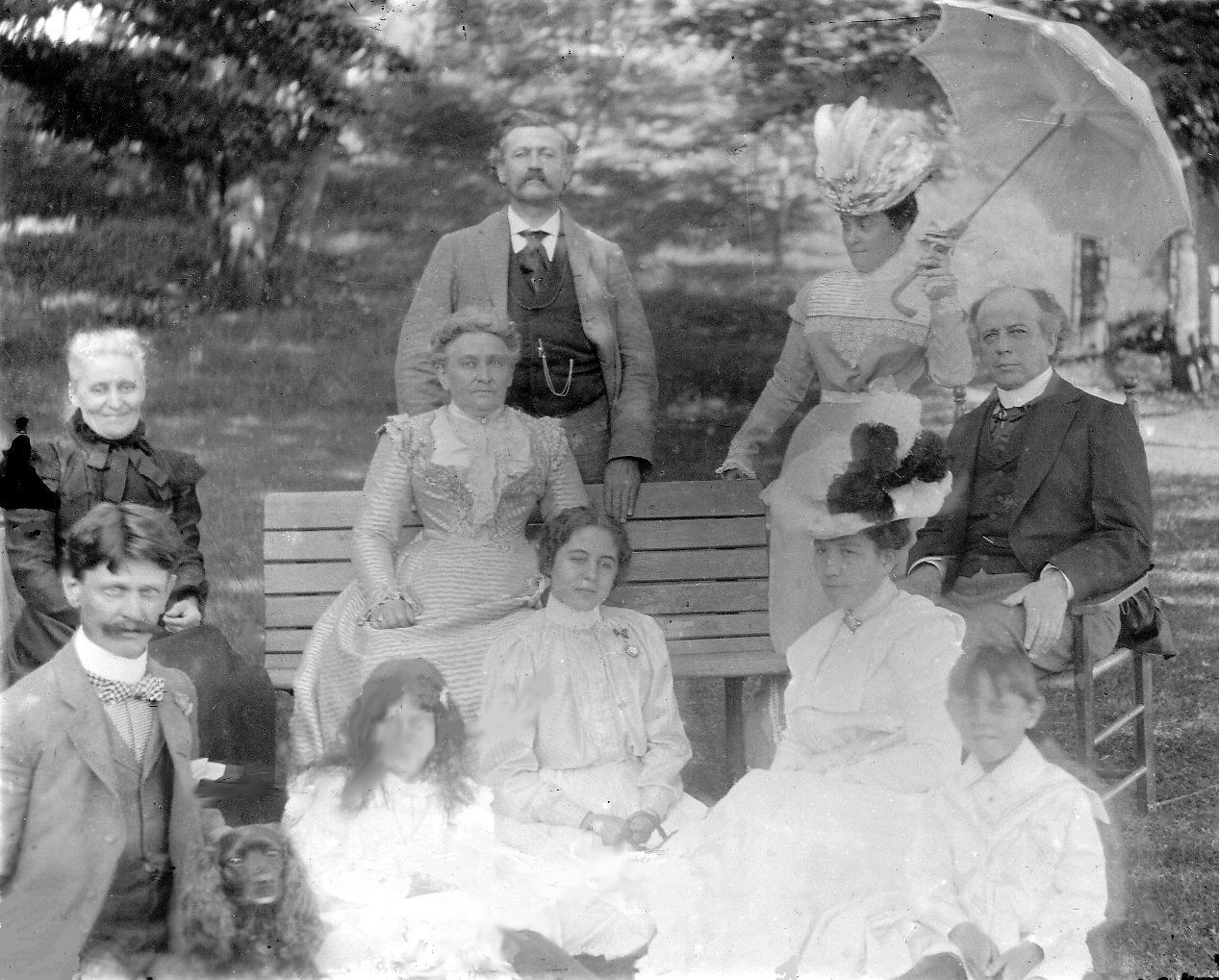 The Lauriers with family and friends in the backyard of their home in Arthabaska. 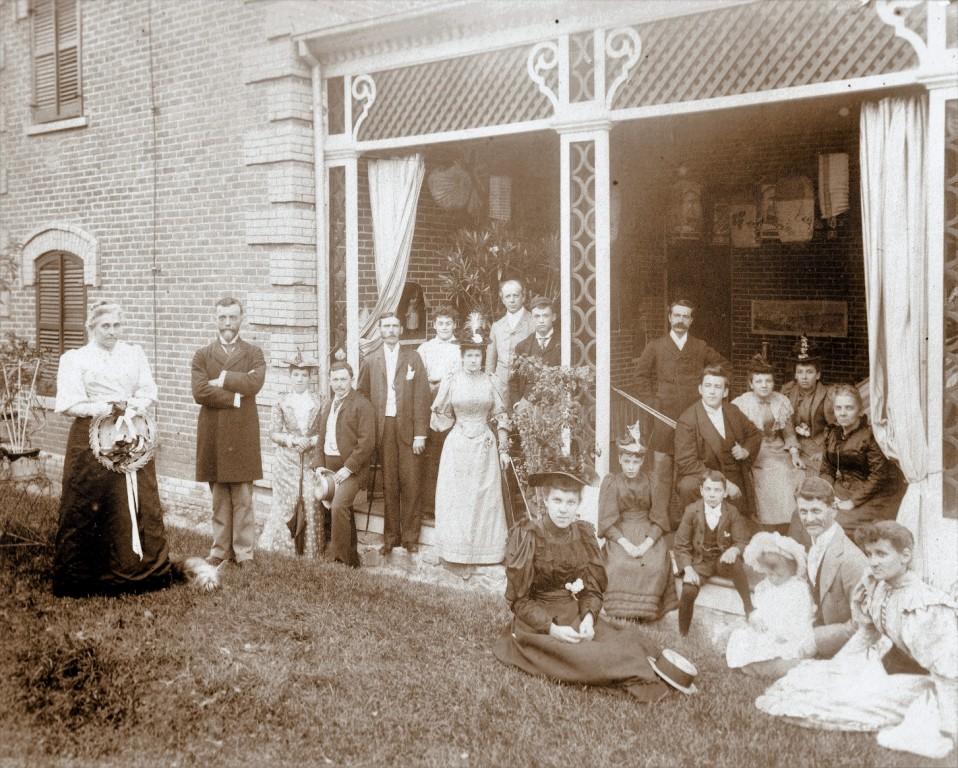 The Lauriers and their guests at the back of their house in Arthabaska. 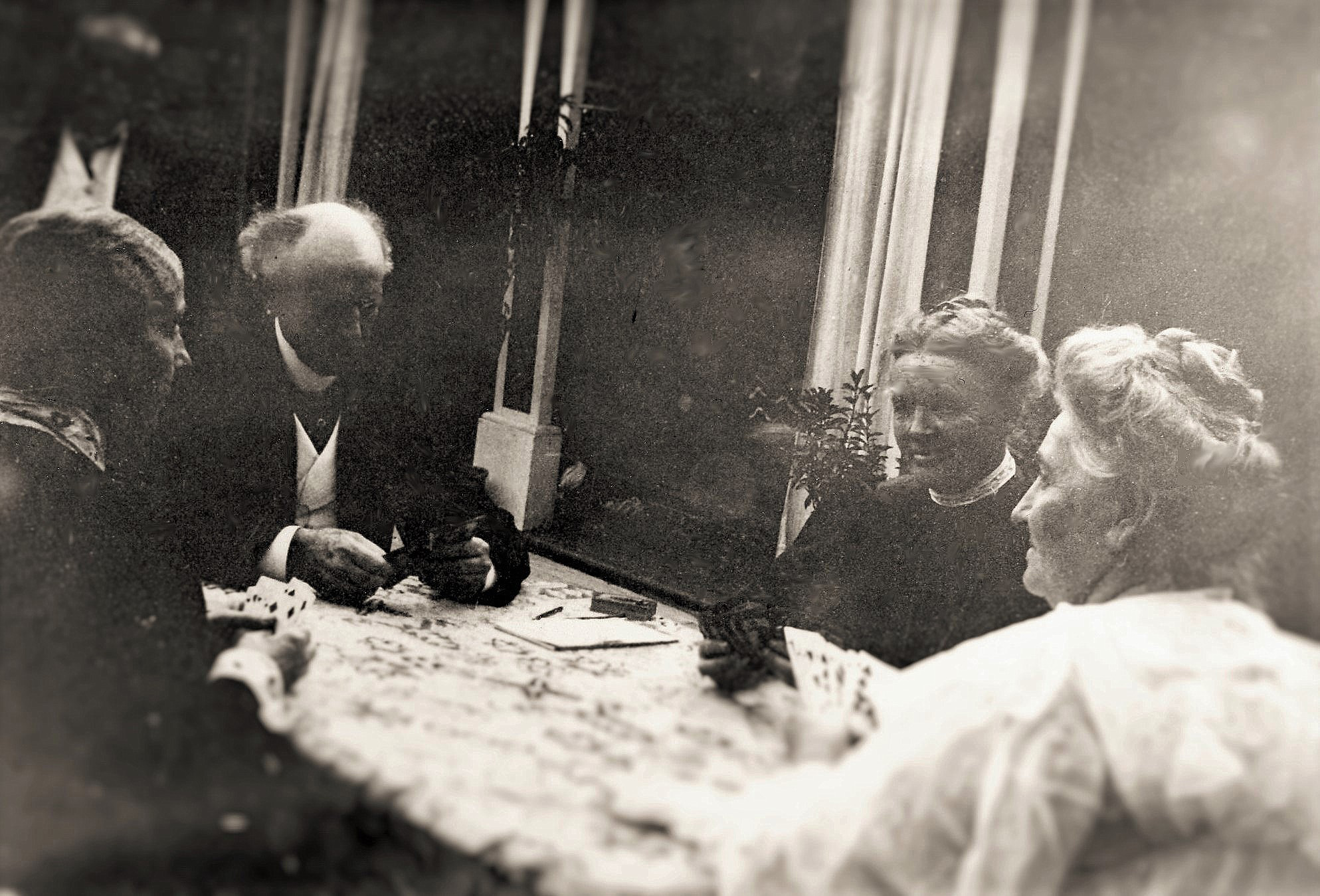 The Lauriers playing cards on the back veranda of their house in Arthabaska.
PreviousNext

The Lauriers moved into the house in 1877 and lived there full-time until 1887, when Laurier was named leader of the Liberal Party. Once Laurier became prime minister of Canada in 1896, he and his wife moved to Ottawa permanently, returning to Arthabaska only for holidays and in the summer. Arthabaska became the prime minister’s retreat, a place where he could escape from Ottawa (which he referred to as “the furnace” in his correspondence) and enjoy the calm of the countryside and the company of old friends.

Modifications over the Years

From 1910 to 1921, Laurier leased the house to Justice Camille Pouliot, who had a large family, so Laurier agreed to make various expansions. In 1914, the dining room on the ground floor was converted into the main living room, reserved for the Lauriers during their stays in Arthabaska. The veranda was pushed out to make space for a brand-new dining room decorated in a more modern, post-First World War style, and a new room was added above the dining room, on the second floor.

In 1918, Laurier installed a central heating system, with a coal-fired furnace in the basement and radiators added to the rooms on the second floor, previously heated by five fireplaces. (The fireplace in the main living room was retained.) Further modifications were made later on, when the house became a museum.

Establishment of the Museum

When Laurier died in 1919, his wife, Lady Laurier, inherited the house. When she died in 1921, the house was left to their niece, Pauline Laurier Harvey, since the Lauriers had no children. In 1928, Pauline sold it to two businessmen from Westmount, Québec — Noah A. Timmins and Andrew Kirk Cameron — who donated it to the Government of Québec on the condition that it be made into a museum commemorating the life of Sir Wilfrid Laurier.

The Laurier Museum opened its doors in May 1929 and became an official provincial museum in 1934. In 1975, a not-for-profit organization, the Société du Musée Laurier, was established to operate the museum and its interpretive programs, while the Québec government remained responsible for maintenance and restorations. In January 1997, the Québec government deeded the house to the society, which has been its sole owner and manager ever since.

Development of the Museum’s Collection

The museum’s original collection consisted of archives, furniture and other items that had belonged to Sir Wilfrid and Lady Laurier and were donated by their family and friends when the museum first opened in 1929.

The museum’s art collection was founded in the 1930s, when sculptor Alfred Laliberté, who had been a close friend of the Lauriers, generously donated several of his works to the museum. The collection now also includes works by Marc-Aurèle de Foy Suzor-Coté (the Lauriers’s best-known protégé) and by Louis-Philippe Hébert. 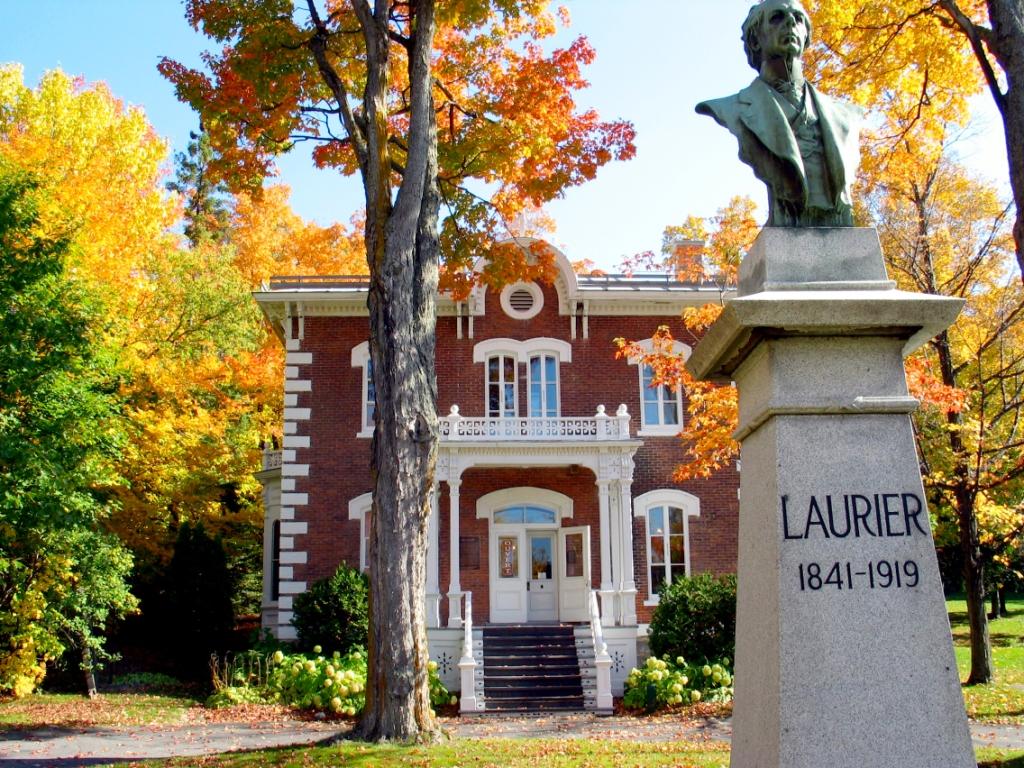 In the 1920s, Laliberté and Suzor-Coté designed and built a monument to honour their friend and patron Sir Wilfrid Laurier. The monument was unveiled in September 1922 in front of the Arthabaska city hall and was moved in 1944 to the front of the Laurier House, where it still stands.

The Laurier Museum collection continues to grow through gifts and acquisitions of works of art and objects related to the life of Sir Wilfrid Laurier.

The primary mission of the Wilfrid Laurier House National Historic Site of Canada is to interpret the life and career of Sir Wilfrid Laurier and the history of Canadian politics. Its mandate also includes curation and outreach. The site presents historical exhibitions annually and maintains a permanent exhibit on Sir Wilfrid and Lady Laurier.

The Société du Musée Laurier owns the house and also owns and manages three other buildings, including a former post office. This heritage building opened as a museum in 1996 to present art exhibitions that were formerly shown in the Wilfrid Laurier House. The art collection from the Laurier Museum was moved to this post office museum at that time.

The Wilfrid Laurier House was officially recognized as a historic monument by the Government of Québec in 1989 and was designated a National Historic Site of Canada in 1999 because of its direct association with Sir Wilfrid Laurier, an important figure in Canadian political history, and its exceptional state of preservation.