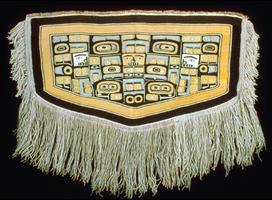 Canada has a rich history of weaving stretching back to the precontact Indigenous peoples and enriched by each succeeding wave of immigrants. The working together of lengths of fibre (threads) to make a fabric can be done in simple and universal forms by the fingers alone to produce braiding and basketry constructions. Netted and knitted fabrics can be made with very simple tools. To produce a woven textile, 2 sets of threads must be interlaced: one set, the warp, is held by some kind of support; the other, the weft, is worked over and under the warp threads to hold them together in a firm but flexible form. With simple weaving equipment every movement is done by hand; however, over a long period of time, technological advances meant that more work was done by the loom and less by the weaver. The key development that turned the weaving frame into a true loom was the heddle, which, in its simplest form, is made up of a pair of rods with attached string loops through which the warp threads pass. These rods can be manipulated to make an opening (a shed) through the warp threads for an easy passage of the weft. From these simple beginnings looms have become more and more complex, with increasingly automatic action.

The Indigenous peoples produced beautiful weaving without benefit of a shed-making device. Therefore, although their weaving was skilful and of high quality, it was very time consuming. Skins were used for utilitarian purposes; woven textiles were reserved for prestige items such as the magnificent ceremonial blankets used on the West Coast (see Chilkat Blanket), bands and exquisite ornaments woven with porcupine quills. The weave used was a special technique (weft-twined weave), which developed from the making of baskets.

In weft twining, 2 weft threads enclose each warp or group of warps in turn and then twist around each other before moving on to the next warp. From early times, this technique was used in many parts of the country with wide variations of texture, material and design. As trade goods became available, they supplanted the Indigenous weaving, but for some purposes the skills were maintained and are still practised.

The first migrants to come from Europe were the French, who settled along the St Lawrence and in parts of the Atlantic region in the early 17th century. At that time France was famous for tapestry weaving, but the settlers brought with them the simple country skills, home spinning of yarn and weaving of cloth for utilitarian clothing and bed coverings. At first, few textiles were produced but, as time went on, home production of textiles became important; girls were taught to spin, and farmhouses contained looms on which household goods and some material for barter were produced. The loom used in New France was very simple; the cloth woven, very plain. For bed coverings, 2 simple hand-patterning techniques were used: à la planche, in which a narrow board was used to open a pattern shed for a coloured weft to form simple block designs; and boutonné, in which multicoloured wefts were pulled up in loops to make motifs (eg, stars, pine trees). There was also a considerable production of heavy lengths of material with a weft of old cloth torn into rag strips. In the early days these catalogne lengths were used for bed coverings; in more recent times, for floor coverings.

Loyalists who moved N to the Atlantic region and to what was to become the provinces of Québec and Ontario were from a variety of ethnic backgrounds, many of them British. Most of the women could spin and some could weave. As soon as possible, flax was grown to provide fibre for linen and sheep were raised for wool. Household linens and blankets and warm lengths for clothing were made in many homes, but among the settlers there were a number of trained professional handweavers, usually men, who could operate complex pattern looms. These craftsmen wove fancy linens and ornamental bed coverings, often the pride of a bride's trousseau. The coverlets were usually in either summer and winter weave or double cloth, both of which produced striking geometric patterns and were usually of dark blue wool and white linen or cotton.

Of the many European immigrants who followed the Loyalists, those who had the most impact on Canadian weaving traditions were the Scots, Irish and Germans who had been thrown out of work during the Industrial Revolution by the mechanization of the weaving industry in Scotland and Germany, and many of the out-of-work weavers came to Canada. They expected to farm but found they could again practise their profession profitably. One or more of these experienced weavers could be found in most areas in the older parts of English-speaking Canada. Housewives usually prepared the yarns, but much of the weaving was done by the professionals. Imported materials could be purchased in settled areas of Canada from the early 19th century on, but many of the blankets, carpets, linens and clothing materials were locally produced by handweavers, until quite late in the century, when it ceased to be profitable. Ornamental bed coverings, or coverlets, were an especially popular production of the local professional weavers. In the Scottish-Irish areas the usual weave was one called overshot, ie, an extra weft shoots over and under a plain ground, forming complex and striking geometric patterns and making a very warm covering. The patterns were usually in wool, dark blue or plain, bright red, sometimes banded. The ground was almost always white cotton. In German areas the weaves used for ornamental coverlets and decorative horse blankets required very complex handlooms for elaborate twill interlacings and a patterning that had rows of stars alternating with diamonds.

The complex Jacquard loom, in which the opening of the pattern sheds is controlled by a series of punched cards, was introduced in the 1830s. The loom was used by a comparatively small number of local professional handweavers in Ontario. The patterns that were possible with this new loom were semirealistic with flowers and birds and other motifs that were beyond the capabilities of earlier looms. A Jacquard coverlet was a much-treasured possession and often survives from a wedding trousseau.

Spinning and weaving are crafts that go with pioneering and, just as the skills were falling into disuse in eastern Canada (around 1900), the West was opening up. Store-bought goods were available by mail-order catalogue, but many textiles were produced locally. Pioneers from eastern Canada or Britain had, for the most part, lost their textile-making skills a generation or 2 before. Those from Scandinavia, Germany or eastern Europe were accustomed to spinning yarn from their own home-grown wool, flax and hemp. Many spinning wheels used on the prairies have survived, but the hand-spun yarn was knitted into warm garments that have worn out. Fewer looms have survived; most of the weaving was for perishable things like rag Rugs, few of which still exist. Ukrainians and Doukhobors did more ornamental weaving, some of which has been preserved. Ukrainians furnished their homes with handsome, woven bench covers of linen, hemp and wool banded in colour, and gave their rooms a warm brightness with tapestry-woven woollen wall hangings in bright geometric patterns. The Doukhobors produced coarse tapestry weave in very bright colours and rugs with a thick woollen pile knotted into a plain firm ground (in the same way that oriental carpets are made). These 2 patterning techniques, typical of their earlier homes in the Caucasus, have been quite widely used since the Doukhobors settled in Saskatchewan and BC. Canada's weaving traditions reflect the nation's fascinating cultural diversity. Some of the older traditions have blended together; those that came later still stand uniquely on their own.