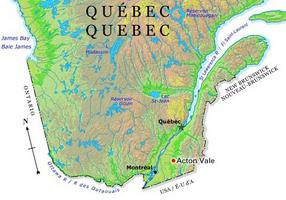 Acton Vale, Qué, Town, pop 7797 (2006c), 7325 (2001cA), inc 1908. Acton Vale is a small manufacturing centre on the Rivière Le Renne, about 25 km southwest of Drummondville. The first settlers of the township of Acton were either United Empire Loyalists or British, especially Scots, who homesteaded the area in the 1830s. Acton Vale benefited from the building of the St Lawrence and Atlantic Railroad line to Portland in the early 1850s and from the discovery, in 1857, of a rich copper deposit located less than 1 km from the railway station. Even though the various mining operations lasted less than 6 years, they had a tremendous impact on the early development of the community. In 1861 it was incorporated as a village.

Known as La porte de l'Estrie (Door to the Eastern Townships), Acton Vale is the county seat of the regional municipality of Acton. Its main employer is Peerless Carpets. The town's cultural life is centered on the old Grand Trunk railway station, now a tourist information bureau and art gallery. The river winds through the town offering green spaces and cycling paths.