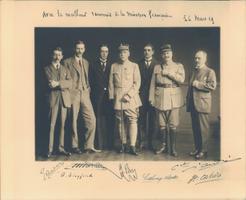 André Siegfried, geographer, political commentator (born 21 April 1875 in Le Havre, France; died 28 March 1959 in Paris, France). André Siegfried was the preeminent French geographer of his generation. He wrote definitive studies of nations around the world, including New Zealand, Britain, France, the United States, and Canada. He pioneered the field of electoral geography, the study of the interaction between geography and politics. Siegfried was widely admired within France and internationally for his incisive and thoughtful analyses of the social, economic, and political processes that shape societies.

Travels and reflections on Canadian society

André Siegfried first travelled to Canada in 1898. He made two subsequent trips after the turn of the century, including during the campaign for the 1904 federal election, which was won by Sir Wilfrid Laurier's Liberals. He returned to Canada in 1914, 1919, 1935 and 1945. One can say his knowledge of the country is not only theoretical, unlike many of its European counterparts.

Siegfried's observations during these visits lead to his first work on Canada, Le Canada, les deux races : problèmes politiques contemporains (1906), translated in 1907 as The Race Question in Canada. Siegfried identified with penetrating clarity the central issues in the country at that time. He presented a psychological profile of French and English Canadians, and the inevitable "rivalries" between them. He examined the strong influence of the Catholic Church on education and politics in Canada, and also discussed the shifting influence of Britain, France, and the United States on the emerging nation. The final chapter of the book, "The Future of Canada in North America," contemplates Canada's future as either a de facto British colony, an independent nation, or an annex of the United States.

André Siegfried took up the question of Canada's increasingly prominent role in world affairs in his 1937 Le Canada: puissance internationale (tr. in 1937 under the title Canada). In the preface to this work he describes his ongoing fascination with a country that he describes as "American geographically, British politically, largely French in origin, and yet world-wide in its international preoccupations." The further increase in Canada's world stature that followed World War II is indicated in Siegfried's revised version of this text, published in 1947 under the new title Canada: An International Power.

As a Professor of Geography at the École libre des sciences politiques, André Siegfried travelled widely, lecturing and interpreting the world of his day. He was honoured in his home country and abroad. He held the chair of geography at the Collège de France, and is the only geographer to have been elected one of the "Forty Immortals" of the French Academy.