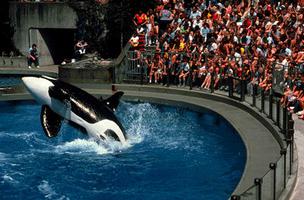 An aquarium is an organization devoted to the public exhibition of both freshwater and marine aquatic life. Exhibit species may include not only fish but also other aquatic animals. These may include invertebrates, amphibians, reptiles, birds and marine mammals such as sea otters, seals, sea lions, dolphins and whales. Identification labels typically note the species on display, and offer information on disctinctive features, reproduction cycles and the distribution of the species.

Display emphasis and exhibit philosophy vary. The focus of accredited aquariums is on education, research, conservation and recreation. It is estimated that more than 4.5 million people visit aquariums in Canada annually.

The Aquarium and Marine Centre in Shippagan, with 163 aquatic species, offers conservation and education programs and is the Regional Aquaculture Office and Research Centre for the New Brunswick Department of Fisheries. Interpretive activities and educational programs are available at the Aquarium de Québec, based on a collection of 250 aquatic species.

The Vancouver Aquarium, opened in 1956, was Canada's first public aquarium. It was built as a result of the 1951 Massey Commission, which recommended that a National Aquarium be developed to illustrate the importance of fisheries to Canada. Operated by the Vancouver Aquarium Association, a private nonprofit society, the Vancouver Aquarium is completely self-supporting. The aquarium displays over 35 000 specimens of 612 species. In addition to its live collections, Vancouver Aquarium offers extensive curriculum-based programs. There are community, travel and outreach programs for all ages. A fully staffed research and conservation department and a publications program serves the scientific community in conjunction with local universities.

The first aquarium to receive accreditation from both the American and Canadian Associations of Zoological Parks and Aquariums, the Vancouver Aquarium was designated Canada's Pacific National Aquarium in 1987. Naturalistic habitats emphasize the indigenous aquatic life of the Pacific Coast region, ranging from algae and invertebrates to whales. With a zoogeographic floor plan, the aquarium also offers interpretation of the fauna of the South Pacific, the Amazon and Canada's Arctic.