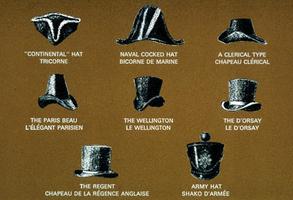 Beaver pelts were an integral part of the early Canadian fur trade economy. Aboriginal and European hunters supplied trade networks that capitalized on the popularity of beaver pelts in European markets. As beaver grew scarce in certain regions, hunters moved farther north and west, establishing a network of forts and supply routes that laid the groundwork for the development of Canada.

Beaver pelts were divided into two major categories in the fur trade: coat beaver and parchment. Coat beaver (castor gras) pelts had been processed and worn for a season by hunters — usually Aboriginal peoples — before being traded. The inner sides were scraped and rubbed with animal marrow; the pelts were then sewn into robes and worn with the fur side inward. After several months of wear, friction with the hunter’s skin loosened or removed the long guard hairs, and the hunter’s sweat oiled the beaver skins and made them pliable.

The remaining under fur, or beaver wool (duvet), consisted of barbed hairs that formed a durable, luxurious felt. Hatters easily shaved the wool from the skins, which themselves yielded useful leather, and then processed the wool into felt. This felt was of prime importance to the European hat industry until the 1830s, when less expensive silk hats became more fashionable.

Parchment (castor sec) pelts were sun dried immediately after skinning. Once in Europe, they required a specialized combing process to remove the guard hairs. Parchment pelts were less valuable than coat beaver, but could be sold to traders more quickly than coat beaver.

Beaver pelts were central to the early Canadian trade economy. The centrality of the trade was underlined by the Hudson’s Bay Company’s (HBC) introduction of the Made Beaver currency, which first standardized prices in terms of coat beaver pelts, and later allowed hunters to keep the value of their pelts in Made Beaver tokens. Other entities, including the North West Company, also issued tokens in exchange for pelts.

A 1733 Standard of Trade for the Fort Albany HBC post outlines the cost of various items in beaver pelts. For example, one beaver pelt could buy either one brass kettle, one and a half pounds of gunpowder, a pair of shoes, two shirts, a blanket, eight knives, two pounds of sugar or a gallon of brandy. Ten to twelve pelts could buy a long gun, while four pelts would purchase a pistol. The HBC produced brass Made Beaver tokens in the 1860s, and continued to exchange pelts for tokens until 1955.

Though the fur trade declined in economic importance beginning in the early 19th century, the beaver pelt was an essential part of the development of relations between Aboriginal peoples and European settlers.