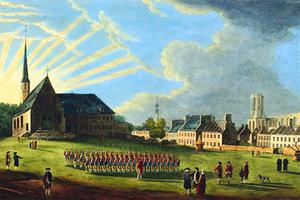 A view of the cathedral, Jesuit College and Recollect Friars Church (Québec), circa 1761, watercolour by Richard Short. It was the first classical college (courtesy Library and Archives Canada/C-354).

Classics, the study of Greek and Roman antiquity, revered for centuries as a quintessential element in a liberal education, gained its foothold in Canada during the 17th century when Latin entered the curriculum of the Jesuit College in Québec. The benevolent "tyranny" of Classics in French-speaking Canada, inaugurated in 1636, ended in 1960 when the collèges classiques ceased being the sole source of the BA degree and when it became acceptable to obtain a BA without Greek or Latin as background study.

Elsewhere in Canada, particularly after Confederation, Latin and Greek, tenacious factors in secondary-school class offerings until WWII, were taught along Victorian and Edwardian disciplinarian lines favoured in English and Scottish universities and schools. Literary, historical and philosophical elements were reserved for university programs.

Inroads and advances by scientific studies, engineering, medicine, law and business administration, and the effects of technological and social changes during the 1950s, shattered the security of Classics as a discipline. Greek and Latin, one-time haven of university scholarship holders and aspiring intellectuals, damaged by dispiriting teaching founded on grammatical exegesis and prose composition and on literal translation as training in exactitude of expression, were faced with plunging enrolments and with accusations that they were outmoded and fossilized.

Classicists responded by devising and adopting new methodologies and livelier textbooks to present the ancient languages in the post-Sputnik era. The Cambridge Latin Course in particular won widespread adoption in the 1970s and helped save Latin from extinction in the high schools. Contemporary linguistic theory applied to Latin teaching engendered fresh notions of what a language-learning course should be. In particular, secondary-school students were encouraged to study material that merited both literary and sociological discussion and criticism. Greek, which was moribund or extinct in secondary schools by the 1960s, found renewed life with the McGill University course, patterned after the successful structuralist Latin courses and employing practices familiar in the language laboratory. Both languages continue to attract registration in the universities, and Latin studies find slender but continuing commitment in secondary schools where administrators countenance small enrolments.

The universities, faced with deteriorating registration in Classics and in combined Honours courses including Latin or Greek, resorted to patterns pronounced successful in the US; courses in translation and in classical civilization or classical studies, introduced tentatively during the 1950s, multiplied rapidly. Nowadays, hundreds of students from different backgrounds and course affiliations attend classes in Greek and Roman drama, epic, biography and historiography, religion and mythology. Mounting interest in Mediterranean archaeology and in art history has also helped revive the Classics, and the incorporation of archaeological material into civilization courses has contributed greatly to their popularity. Ancient history, taught under the aegis of either Classics or History departments, supports classical studies in appropriate ways. Classics, by reason of its composite nature, and by choice, has also collaborated with programs in COMPARATIVE LITERATURE, hermeneutics and modern Greek.

Diminishing enrolment in Latin and the demise of secondary-school Greek failed to thwart the development of advanced study in Classics. MA programs exist at most major universities and doctoral studies have been developed at Dalhousie, Laval, McGill, Université de Montréal, University of Ottawa, McMaster (Roman Studies), University of Alberta and niversity of British Columbia. The University of Toronto program has the most course offerings and largest enrolment. Degree programs and doctoral dissertations are generally conditioned by the particular scholarly expertise of professors involved and by the universities' research collections. Research and teaching are the primary functions of classicists in universities. Support for their programs derives from federal agencies, university resources and foundations and organizations outside Canada. Prime support comes from the SOCIAL SCIENCES AND HUMANITIES RESEARCH COUNCIL OF CANADA, the Killam Senior Research Fellowship Program, the American Council of Learned Societies, the Institute for Advanced Study at Princeton, NJ, and the Nuffield Foundation (England). Grants-in-aid of publication derive largely from Canadian federal agencies. The quality of teaching and research in the Classics has been recognized not only in national and international awards for excellence, but also in the rich diversity of journals and publishers who by publishing have promoted Canadian classical scholarship.

Canadian Universities have been involved with several scholarly projects: Lexicon Iconographicum Mythologiae Classicae, an international iconographical dictionary of classical mythology as depicted in the complete range of art works from the ancient world, and including material in Canadian museums and galleries, with support from the HUMANITIES AND SOCIAL SCIENCES FEDERATION OF CANADA; the Dio Cassius project (University of Calgary); Catalogus Translationum et Commentariorum (Pontifical Institute of Mediaeval Studies, Toronto); Vergilian Bibliography (McMaster); and The Collected Works of Erasmus (several volumes have been published 1990-97 by the University of Toronto Press).

Fresh incentive to classical scholarship and to archaeological and historical study is provided by 3 Mediterranean centres under the aegis of the Canadian Mediterranean Institute since 1980: the Canadian Archaeological Institute at Athens (founded in 1974), the Canadian Academic Centre in Italy (Rome, founded in 1978) and the Canadian Institute in Egypt (Cairo, founded in 1980). These overseas headquarters enjoy amiable and hospitable links with the American Academy in Rome, the British Schools in Athens and Rome, the American School of Classical Studies in Athens and the Vergilian Society in Italy (at Cumae, near Naples).

The Classical Association of Canada (founded in 1946), although an outgrowth of the Ontario Classical Association, was able to claim national identity by its membership a mari usque ad mare. Its annual meetings, in conjunction with those of the Royal Society of Canada and other LEARNED SOCIETIES, cater to anglophone and francophone audiences, and feature colloquia on material and issues of general interest. The association's journal, Phoenix, launched 1947, has attained international status as a scholarly quarterly. Canadian classicists have been numbered among presidents, editors and executive members of the various international classical organizations. Presidents of the CAC are recognized as vice-presidents of the Classical Association (UK).

The abolition of the Latin requirement at Oxford and Cambridge universities in the 1960s and the restriction of the use of Latin in the Roman Catholic mass were but visible symbols of the dwindling capital and overstrained credit of the Classics. But new teaching techniques, vigorous research programs and interdisciplinary engagements by classical scholars mark a "Copernican revolution" in the discipline. Degree courses in classical studies for undergraduates who come to university with little or no experience with the classical languages would have been inconceivable to earlier generations. The continuing presence of Classics in the universities indicates that the ability of the Classics to sustain and fortify society in the face of life's problems and predicaments remains durable and intact.