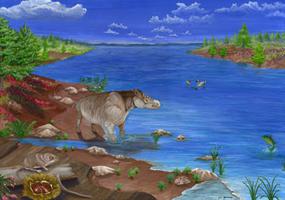 Artist's restoration of Haughton Lake as it may have looked about 23 million years ago, with a shrew, rabbit, rhinoceros, swan, small deer-like mammal, fishes, and plant life of the time (by Jon Zummo, courtesy Mary Dawson). 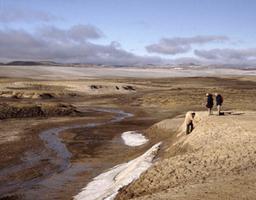 Paleontologists working in Haughton impact crater, with Haughton Formation in foreground and light colored impact breccia in background (courtesy Mary Dawson).
PreviousNext
Near the north coast of DEVON Island (NU) at about 750 north latitude, there occurs an unusual, roughly circular geologic structure originally called Haughton Dome; its origin puzzled scientists for many years. Finally, in 1978 Ray Thorsteinsson, Tom Frisch and colleagues from the Geological Survey of Canada determined that this structure is actually the remains of a meteorite IMPACT CRATER. After the Haughton crater formed, a lake developed within it. Over the years of existence of this lake, eroded sediments accumulated on the lake floor. Over time and long periods of erosion, the lake itself vanished but the sediments, hardened into rock and named the Haughton Formation, were left. These lake sediments contain fossilized remains of plants and animals that lived in and around the lake about 23 million years ago, near the beginning of the Miocene Epoch. Although this time interval is well known from localities at mid-latitudes, this is the first, and thus far only, record of early Miocene vertebrate life at high northern latitudes.

FOSSIL bones were first discovered in 1978 in the rocks formed in the now vanished Haughton Lake. Subsequent palaeontological investigations between 1979 and 2007 produced an assemblage of lacustrine and terrestrial plants and animals that provide a window on early Miocene life at this high latitude. Fossil fishes are well represented in the lake sediments, by several kinds including trout and a smeltlike form. A record of at least one bird, a relative of the swan, is somewhat surprising, for swans no longer occur this far north. Mammals are diverse in size and kind. The smallest is a tiny shrew. Rabbits are very numerous, indicating the presence of many of these animals around the lake. A small carnivore and a rodent are represented by one specimen each. At least one kind of rhinoceros is known from a nearly complete skull and skeleton. This was a relatively short rhino, heavily built and with short legs and spreading toes on stubby feet. A small, deerlike animal with very complex teeth that suggest a diet of abrasive plant material is also represented. The shrew and the rabbit appear to have relatives from the mid-latitudes, but the rhinoceros and the deer are unique and probably represent evolution of their lineages at high latitudes.

Abundant fossil pollen and rare plant macrofossils from the rocks of the Haughton Formation provide evidence on the local environmental conditions around Haughton Lake when these fishes, birds and mammals lived there. A forested environment with ample understory (ie, an underlying layer of vegetation) of smaller trees and shrubs is suggested. The fossil pollen of trees shows that larches and alder were dominant and that spruce, fir, pine, birch, chestnut, and sweetgum were present. Grasses were absent or very rare. Comparison of this plant assemblage with living plants suggests that in the early Miocene a humid, cool temperate, probably coastal climate with severe winters prevailed on northern Devon Island, making it roughly comparable to New Jersey today (seeCLIMATE CHANGE). The fossils from the Haughton Formation provide a unique view of life at high latitudes about 23 million years ago, and supply many facts pertinent to understanding evolutionary developments, animal and plant biogeography, climate change and geologic history from a high northern region that is very different today.