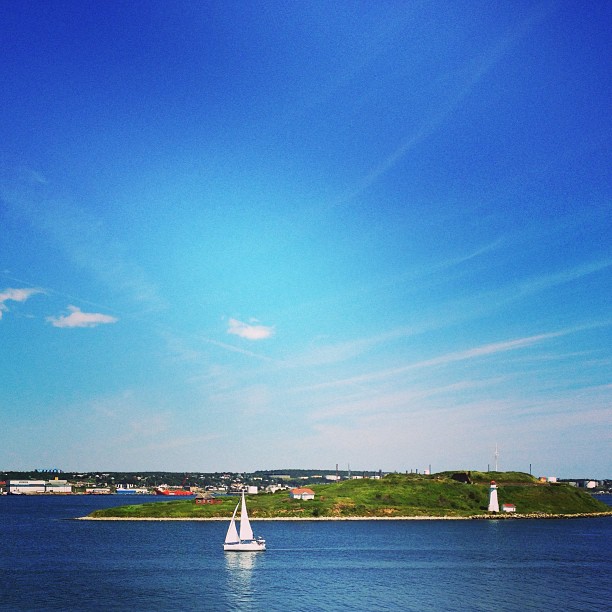 This photo was a runner-up in the \u2018Are You Halifax?' contest. www.instagram.com/hardcorla
'Farewell to Nova Scotia'. A sailor's lament sometimes identified as 'Nova Scotia Song'. Linda Christine Craig in her 'The Scottish origins of "Farewell to Nova Scotia"' (Dalhousie R, vol 58, 1978-9) shows that the song is derived from 'The Soldier's Adieu,' attributed to the Scottish weaver-poet Robert Tannahill (1774-1810), and that it is transformed into a sailor's song with an 'intensity which is completely absent from "The Soldier's Adieu"'.In the third quarter of the 20th century it became the best known of all Nova Scotia songs, partly because the Halifax CBC TV show 'Singalong Jubilee' (1961-74) used it as a theme and Catherine McKinnon recorded it (Something Old, Something New, Arc 256). Other recorded versions include those by Diane Oxner (Canadian Cavalcade CCLP-2005), Terry Kelly (Gun TKP-8391), Finnigan (Banana 1077), and Ian and Sylvia (Vanguard 23-24). Jack Sirulnikoff used it in his Nova Scotia Fantasy for band. G.V. Thompson published a version for choir or voice, with or without piano, in 1964 and an arrangement for band by Peter Riddle in 1978. Another choral version is included in Reflections of Canada.

Helen Creighton collected the song in the 1930s from a half-dozen singers in the Petpeswick and Chezzetcook districts, some 40 km east of Halifax; they told her it formerly was sung in the schools. She included it in Traditional Songs from Nova Scotia (Toronto 1950). Carrie B. Grover, who learned the song as a child in Nova Scotia, gives it in A Heritage of Song (Norwood, Pa, 1973) as 'Adieu to Nova Scotia,' and Marius Barbeau found a related song, 'On the Banks of the Jeddore,' in Beauce County, Que, and published it in the National Museum of Man's Come A Singing! in 1947.