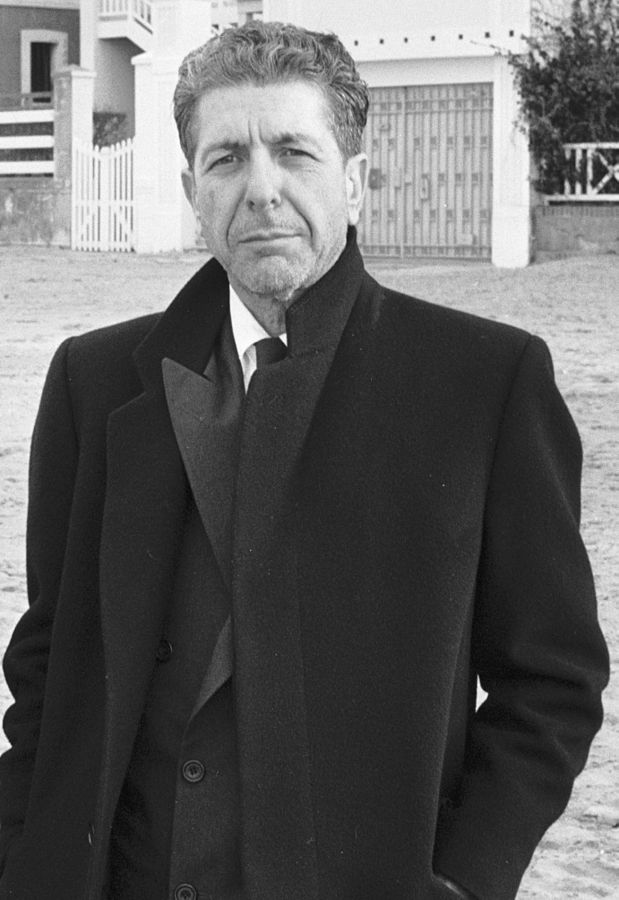 “Hallelujah” took Cohen four to five years to finish and, accordinmng to different reports, originally contained 40 to 80 verses. At one point, frustrated that the song was not coming together, Cohen sat in his underwear in his New York City hotel room banging his head against the floor and saying, “I can’t finish this song.”

Cohen said that the song was inspired by “a desire to affirm my faith in life, not in some formal religious way, but with enthusiasm, with emotion.” He also said, “Hallelujah is a Hebrew word which means ‘Glory to the Lord.’ The song explains that many kinds of hallelujahs do exist. I say, all the perfect and broken hallelujahs have an equal value.”

Leonard Cohen performs in front of a big audience for his only Italian date of the tour: Florence, piazza Santa Croce on September 1, 2010.

“Hallelujah” was included as the first song on side two of Cohen’s seventh studio album, Various Positions (1984). The album begins with “Dance Me to the End of Love” and ends with “If It Be Your Will,” two other songs that were initially overlooked but eventually became staples of Cohen’s catalogue. Coming five years after his previous album, Recent Songs (1979), Various Positions revealed that Cohen’s singing voice had deepened into his signature gravelly baritone. Columbia Records declined to release the album in the United States because, as Cohen claimed in a 2009 interview, “they didn’t think it was good enough.” American retailers were forced to import the album from CBS Canada. Although it sold reasonably well in Europe,it had mixed reviews and generally low sales in North America, and “Hallelujah” barely registered with the public.

In 1991, John Cale covered “Hallelujah” for the Cohen tribute album, I’m Your Fan. Cale’s version inspired British singer-songwriter Jeff Buckley to record his own tender version of “Hallelujah,” which appeared on his first and only album, Grace (1994). Following Buckley’s death in 1997, his version of “Hallelujah” became very popular and has since appeared on numerous best songs lists; Rolling Stone ranked it No. 259 in their list of the 500 greatest songs of all time in 2004.


In 2001, Rufus Wainwright recorded a version of “Hallelujah” that appeared on the soundtrack to the movie Shrek. Although Cale’s version is heard in the film, DreamWorks Pictures chose Wainwright to be on the soundtrack because he was signed to their subsidiary company DreamWorks Records. The Shrek soundtrack was certified double platinum in the US in 2003.

Canadian singer k.d. lang delivered a powerful interpretation of “Hallelujah” on her 2004 album, Hymns of the 49th Parallel. She then mesmerized audiences with performances of her version at the 2005 Juno Awards in Winnipeg, at Cohen’s induction into the Canadian Songwriters Hall of Fame in 2006 and at the opening ceremonies of the 2010 Olympic Winter Games in Vancouver. Upon hearing Lang’s performance at the Canadian Songwriters Hall of Fame, Cohen reportedly remarked, “Well, I think we can lay that song to rest now. It’s really been done to its ultimate blissful state of perfection.”


However, after contestant Jordan Castro performed it on American Idol in 2008, Buckley’s “Hallelujah” reached No. 1 on Billboard’s Hot Digital Songs chart and was certified platinum in the US. The winner of The X Factor that year, Alexandra Burke, released a shortened version of “Hallelujah” that hit No. 1 on the UK Singles Chart. Despite being released during the last two weeks of the year, Burke’s cover was the No. 1 selling single in the UK in 2008 and went on to be certified double platinum in the UK.

In 2017, a cover of the song by the a cappella group Pentatonix peaked at No. 23 on Billboard’s Hot 100 chart. Other artists who have covered “Hallelujah” include Bob Dylan, Bono, Willie Nelson, Justin Timberlake, Neil Diamond, Bon Jovi, Celine Dion and former Barenaked Ladies frontman Steven Page, who sung it at former NDP leader Jack Layton’s funeral in 2011. Following Cohen’s death and Hillary Clinton’s defeat in the 2016 US Presidential Election the next day, Kate McKinnon, in character as Clinton, opened an episode of Saturday Night Live with a rendition of “Hallelujah” as a tribute to both Cohen and Clinton.

However, during an interview in 2009, Cohen referred to a review of the movie Watchmen (2009) – which features “Hallelujah” – in which the critic wrote, “Can we please have a moratorium on 'Hallelujah' in movies and television shows?” In response, Cohen said, “I kind of feel the same way… I think it's a good song, but I think too many people sing it. I think people ought to stop singing it for a little while.” In 2011, Salon posted an article by David Daley entitled “The criminal overuse of ‘Hallelujah.’” Daley characterized “Hallelujah” as “a beautiful, mysterious song [which] has been turned into a tacky karaoke number, and become so common that it’s been drained of its power to move.”

In his book The Holy Or the Broken: Leonard Cohen, Jeff Buckley, and the Unlikely Ascent of “Hallelujah” (2012), journalist Alan Light explores the cultural significance of the song and notes that, “Against all odds, it is now unquestionably a modern standard, perhaps the only song that has truly earned that designation in the past few decades… It has reached a place where, for better or for worse, it is universal.”

In 2016, prior to Cohen’s death, Bob Dylan told the New Yorker, “‘Hallelujah’ has resonance for me… [I]t’s a beautifully constructed melody that steps up, evolves, and slips back, all in quick time. But this song has a connective chorus, which when it comes in has a power all of its own. The ‘secret chord’ and the point-blank I-know-you-better-than-you-know-yourself aspect of the song has plenty of resonance for me.”

Following Cohen’s death, the original version of the song appeared on Billboard’s Hot 100 chart for the first time, at No. 59, while Rufus Wainwright’s version reached No. 11 on Billboard’s Rock Digital Song Sales chart. Alan Light was quoted in Pitchfork saying, “[“Hallelujah”] is a magnificent, ongoing work in progress. Its decades-long, slow-burn, shape-shifting trajectory remains a story unlike anything in pop music.” k.d. lang told CBC Radio host Tom Power that “Hallelujah” was “something beyond us all, including Leonard. Leonard had this amazing way of translating wisdom from the gods and making it comprehensible to us mere mortals — and I think ‘Hallelujah’ is a beautiful example of that.”