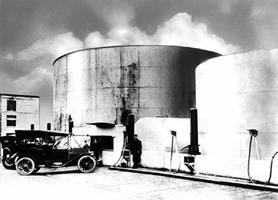 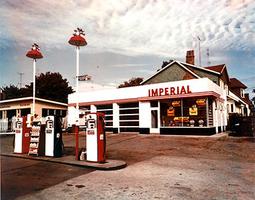 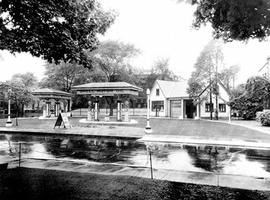 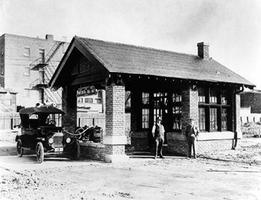 The introduction of the AUTOMOBILE into Canada in the late 19th century created a need for new building types and designs. Garages replaced stables. Parking lots replaced hitching posts. But the building-type which has become the cultural icon of the automobile age is undoubtedly the gasoline (gas) station.

Motor vehicle registration figures appear for the first time in The Canada Year Book for 1916-17. It was in this year that the Year Book accorded motor vehicles a new status as the most important means of transportation in Canada. In 1904 there were 535 cars registered in Ontario; in 1916 there were 54 375. In Canada as a whole that year there were 123 464 vehicles registered. By 1922, this figure had reached 513 821, and in 1928 there were 1 076 819 registered vehicles in Canada.

The enormous popularity of the automobile created a rapidly expanding market for gasoline (a previously unimportant petroleum by-product produced by companies making kerosene for illumination and lubricants for machinery) and led to the development of a new and specialized building type - the gas station. The evolution of gas station architecture reflects both changing functional requirements and changing cultural attitudes.

SeeTORONTO FEATURE: CASIMIR GZOWSKI PARK. At the beginning of the 20th century few places sold fuel and drivers often had to obtain it from oil distribution terminals at the outskirts of communities. There, cans were filled from bulk tanks and manually funnelled into vehicles, a labourious and potentially dangerous practice. These cumbersome manual fuelling methods proved inadequate to meet rapidly increasing demand, prompting the development of more sophisticated pumps and underground storage tanks.

Often located in conjunction with bicycle shops, hardware stores or grocery stores - businesses which carried household petroleum products and expanded into gasoline sales - the curbside station was an important innovation. It filled automobiles mechanically and centralized distribution, thereby reducing the risk of fire. Though more convenient for refuelling, the location of these pumps proved disruptive to traffic flow. The earliest enclosed, drive-in gas stations were simple sheds, devoid of decoration save for advertising. They exhibited little aesthetic interest or uniformity in their design and, as their numbers grew, they came under increasingly negative public scrutiny.

Prior to 1920, the curbside and shed-type stations located in urban centres tended to cluster in and around the central business district. As car ownership increased, oil companies began investing heavily in neighbourhood stations. These not only had to attract and keep customers but they also had to blend in with the residential neighbourhoods. Many of these designs were domestic in inspiration and many of the buildings were prefabricated for convenience and economy. Some companies began copying recognized architectural styles to assist in establishing their corporate identities. As early as the mid-teens, the basic domestic small house or cottage design was modified through the addition of a canopy to produce another distinctive type of gasoline station. By 1925 most stations were equipped with grease pits and car washing floors and these new functions were accommodated by adding one or more bays to traditional designs.

The 1920s was an important decade in the evolution of a gas station aesthetic. Gas stations needed to be accessible and safe for customers. They had to be attractive, fitting into the neighbourhoods in which they were situated. And, increasingly, oil companies saw the advertising potential of their stations, wanting the designs to reflect their corporate identity.

In the early 1920s oil companies and their designers and contractors looked to past architectural styles for inspiration. A professional journal published in 1922 contained a report on four stations of "unusual and artistic design" built in Vancouver. These four buildings, designed by Townley and Matheson, architects, were said to be "suggestive of the California Mission." By the early 1920s Imperial Oil began to build architect-designed stations and by 1928 it had evolved three standard plans for three different urban contexts (business district, urban residential, small town and leased property).

If contractors were the first to grasp the potential of the gas station as a new building-type, there is evidence that by the 1930s professional associations of architects had fully comprehended the message. In 1937, an issue of the journal published by the Royal Architectural Insititute of Canada commented extensively on the unique requirements of the gas station and on its design challenges. A new approach to standard station design was called for - something that would be free of "the dogma of tradition."

The economic depression of the 1930s had a profound impact on station design. To offset declining gasoline sales, many companies expanded their auxiliary product lines, thereby necessitating larger display and storage spaces. They also began to emphasize automobile repair, which required more and larger bays. To attract customers from the competition, oil companies began to construct stations that were distinctly different. Rooflines became flat, offices were enlarged and integrated as an "oblong box" with rectangular perimeter dimensions. The amount of plate glass increased and exterior decoration decreased. Walls of stucco or brick were painted using specific company's colours. Terra cotta was popular facing material in the 1930s while porcelain enamel predominated in the 1940s and 1950s. This new gasoline station design followed closely the edicts of the new International Style of architecture championed by the Bauhaus School in Germany. Originating out of the depression of the 1930s, the highly successful oblong box design was erected in vast numbers during the 1940s and 1950s when, following the lean years of the Depression and wartime rationing, Canadians again took to the roads in force.

By the 1960s, the oblong box had lost favour and oil companies were once again concerned with developing a station which better blended with its environment, experimenting to that end with new rooflines and new materials. The rise of the independent dealers led to the development of a new station type, a simple small box design. Most of these dealers sold only gasoline and oil along with cigarettes and soft drinks. The functional requirements were minimal, consisting of office, storage and rest room space. After 1960, the canopy was widely adopted by independents to facilitate advertising and to give the design more apparent substance.

By 1970, there were many new stations which consisted of vast canopies with small booths which housed only the attendant and his cash register. Rest room facilities and vending machines were housed in separate buildings. These stations marked a return to the original filling station concept and were a result of higher gasoline prices in an era of shortages.

By the late 1980s and continuing through the 1990s, self-service gas stations predominated. Those with attached repair facilities have gradually declined in the face of more reliable cars, improved warranties and the growing popularity of specialty franchises (eg, muffler shops). As customers have turned elsewhere for repair services, companies have sought new ways to generate business, focussing on customer convenience. Many sites now include both full- and self-service pumps, convenience stores, fast food outlets, automated banking machines and other attractions. The word "service" as a prefix to gas station, which once indicated an expertise in specialized car repair and maintenance, has been redefined to mean one-stop shopping.

Few of the early stations have been reused or recycled. Most are small, not built to last, functional in appearance and functionally specific as to design. Their sites, however, are often highly desirable, being well-located urban sites with easy access. There is frequently some level of site contamination which may necessitate the removal of the station building before the site can be reused.

The gas station, a major feature of our urban and rural landscape since the 1920s, has undergone a profound functional and aesthetic evolution. Recent interest in it as a building type is being reflected in scholarly research and literature as well as through identification and protection by municipal, provincial and federal levels of government. In 1995, the Historic Sites and Monuments Board of Canada recognized the former L.J. Shickluna service station (c 1924) in Port Colborne, Ontario, as being of national historic and architectural significance, and the building has been declared a National Historic Site.