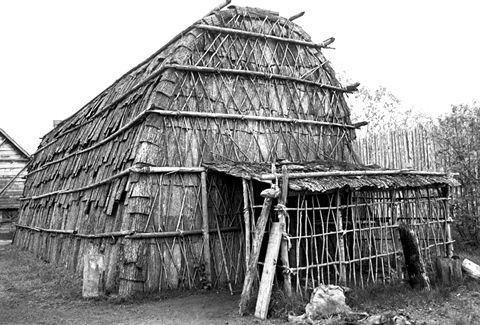 Until about the 18th century, northern Iroquoian-speaking peoples (seeIndigenous Languages in Canada) in Southern Ontario and upstate New York built and lived in residences made of wood, called longhouses. Since the walls and roofs of historic longhouses have not survived to the present, archaeologists rely on clues from the structure’s base, such as wall posts dug into the ground, to suggest what longhouses might have looked like. These decayed remains (known as post moulds) look like stains or dark circles in the soil. Archaeologists also often use the written accounts of European explorers and missionaries of the 17th and 18th centuries for a description of longhouses. Oral histories serve as another important source of information for researchers.

Based on these sources, archaeologists believe that longhouses had a long and rounded outline, with straight sides. The 18th century account of Jesuit missionary Joseph-François Lafitau states that the widths of longhouses ranged from 6 to 9 m. In some instances, longhouses could be much larger; for example, in 1970–72, a longhouse uncovered at the Moyer archaeological site in Southern Ontario was 93 m long. However, longhouses described by early French explorers and Jesuit missionaries were somewhat shorter. Historical sources provide various measurements for longhouses and suggest that the size and shape changed over time.

DID YOU KNOW?
The Haudenosaunee have been referred to as “people of the longhouse.”

Haudenosaunee people constructed longhouses by driving stiff wall posts made of wood into the ground. Flexible wooden poles were then attached to the top of those posts and bent to form roof supports. Lashed together with natural materials, such as long strips of bark or with ropes made of bark, these horizontal poles strengthened the frame. Wooden sheathing covered the structure. In Huron-Wendat homes, this sheathing was made of cedar bark; in Haudenosaunee homes, it was elm bark.

Sleeping platforms ran the length of the house. The number of hearths depended on the number of families in the home. Often, there were about 4 to 12 hearths in a longhouse. The hearths were spaced about 6 to 13 m apart, running down the middle of the structure. They were often shared by two nuclear families of five or six persons. Vents in the ceiling prevented the smoke from the hearths from billowing inside the home. Entrances to the longhouse were often covered with hide. (See also Architectural History of Indigenous Peoples in Canada.)

DID YOU KNOW?
During the winter, the longhouse was central to Iroquoian community life. It was where people assembled to tell stories, conduct sacred ceremonies and socialize. There were fewer people around the longhouse during the summer because villagers were away tending to their crops.

A primary use of the longhouse was to serve as a place of residence. Several families, numbering about six to eight members each, likely resided in the same home. Prior to 1300, longhouses housed about 20 to 30 people. Later, they housed as many as 100 people, as their size doubled. Likely, the people living together were all related or connected to one another from their mother’s line of descent, as Iroquoian societies, such as the Haudenosaunee, were typically matrilineal. For example, after a couple wed, the husband moved into the longhouse of his wife’s family.

Longhouses were also used as places of storage. Dried meats and corn, as well as other food and personal belongings, were stored on platforms built high up on the walls of the longhouse. Firewood was stacked in areas near the entrances at either end of the structure. Covered pits dug inside the house also stored food.

Aside from their practical uses, longhouses served as sites of political gatherings and ceremonies. Followers of the Handsome Lake Religion, for example, continue to refer to the buildings that house their ceremonies as longhouses. The term also carried philosophical and cultural meaning. The Haudenosaunee Confederacy — originally made up of the Mohawk, Oneida, Seneca, Cayuga and Onondaga (the Tuscarora joined later) — characterized their association as a longhouse of five fires. In this way, these nations themselves represented the longhouse, demonstrating the centrality of the longhouse to Iroquoian culture.

While longhouses are no longer used to house families, they remain important to Iroquoian history and culture. Many sacred ceremonies and cultural gatherings are still held in longhouses. Reconstructions of these historic structures can also be found in a variety of museums and cultural centres, such as the Museum of Ontario Archaeology and Sainte Marie Among the Hurons (also in Ontario), where visitors can learn about the history of Iroquoian village life first-hand.