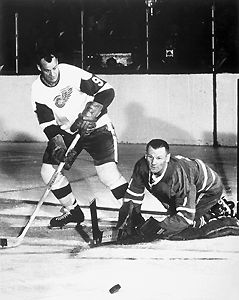 At six feet and 200 pounds, Gordie Howe’s physical strength as a player was legendary. At 15, he was considered sufficiently skilled and strong to be invited to the New York Rangers training camp — but Howe felt homesick and returned to Saskatchewan before the camp was over. The next year, he felt more at home at a Detroit Red Wings camp. The ambidextrous Howe particularly impressed management by leading a rush and taking a shot from his left side, then switching to shoot from his right side in the next rush. After a brief stint with a minor league affiliate, he played his first NHL game with the Red Wings in 1946.

In all, Gordie Howe played 32 major league seasons, including 26 years in the NHL (25 of those with the Detroit Red Wings). He then played with the Houston Aeros and New England Whalers of the World Hockey Association (WHA). The Whalers were later absorbed into the NHL after the WHA folded in 1979, so Howe played one last season with them in the NHL (1979–80). He played his final professional game — on a one-day contract — with the Detroit Vipers of the International Hockey League at age 69, which gives him claim to have been the only person to have played professionally in every decade from his teens to his sixties.

In between, he amassed a remarkable number of records and achievements. His regular season and playoff totals (NHL and WHA) are 2,421 games played, 1,071 goals, 1,518 assists and 2,589 points. His combination of aggressiveness, physical toughness and scoring prowess is evident in the continuing widespread use of the expression “Gordie Howe hat trick” — which refers to a player who, in one game, scores a goal, registers an assist and takes part in a fight.

His career — and life — almost ended in the 1949–50 season, when he crashed into the boards head first. He was knocked unconscious, and due to the seriousness of his condition, his mother was called to his side in the hospital. He was diagnosed with a skull fracture and missed the rest of the playoffs. But he recovered to play the next season and won the league scoring title.

Overall, his consistency was as remarkable as his staying power. He won the Art Ross Trophy as leading NHL scorer six times, the Hart Memorial Trophy as the league’s most valuable player the same number of times, and was a member of four Stanley Cup champion teams. He retired from the Red Wings in 1971 and was inducted into the Hockey Hall of Fame a year later. 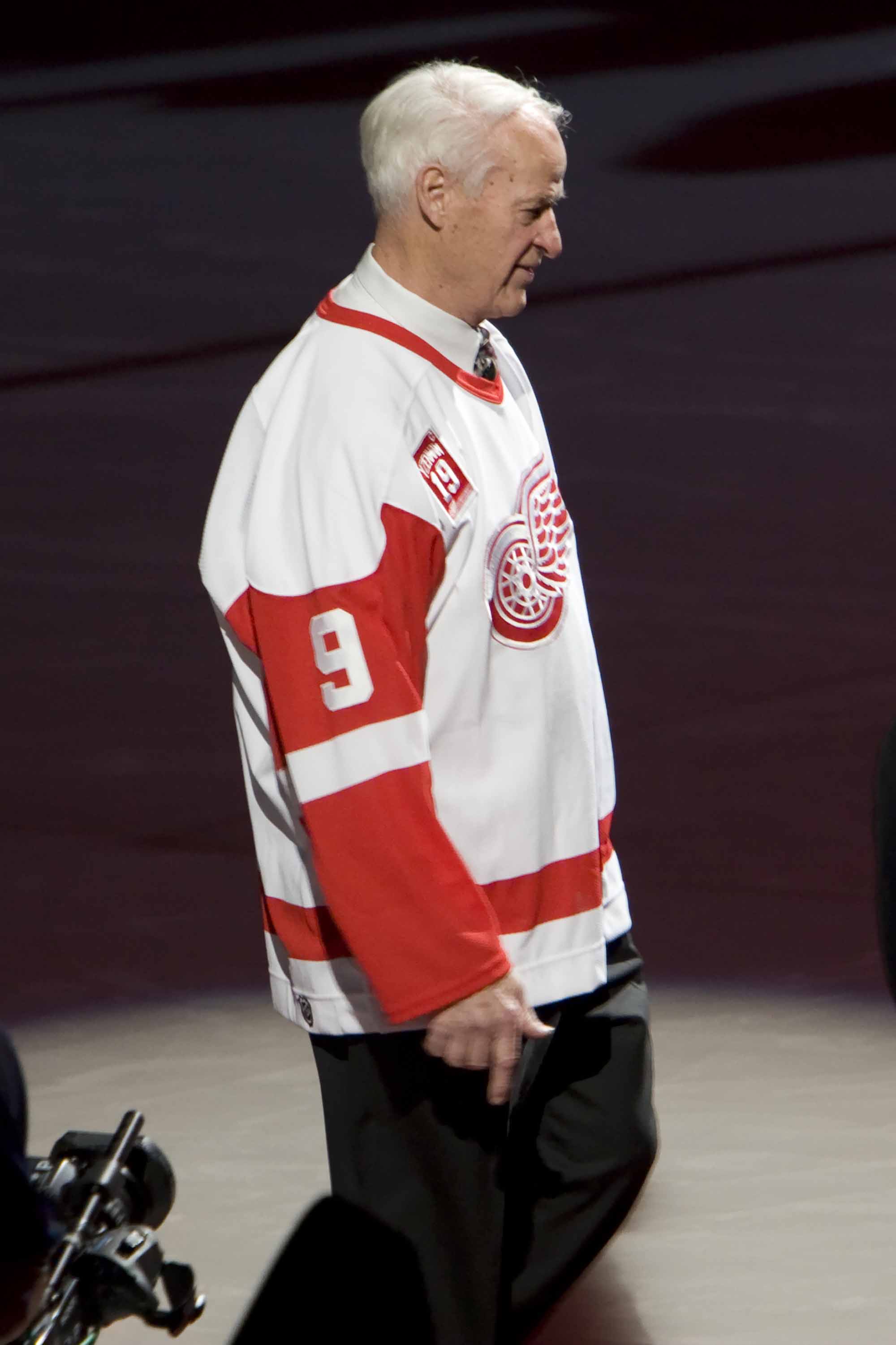 In 1973, Gordie Howe returned to hockey with the WHA Houston Aeros in order to play with his sons Mark and Marty. The deal was largely put together by his strong-willed wife, Colleen, who also acted as his agent in contract negotiations. He later described the opportunity to play with his sons as “my greatest accomplishment and excitement.” Both Mark and Marty were accomplished players in their own right who went on to play in the NHL. Mark was inducted into the Hockey Hall of Fame in 2011. Howe also has a third son, Murray, and a daughter, Cathy, and is close to all his children and their families. His wife, Colleen, died in 2009.

Gordie Howe had a wide-ranging impact on popular culture. In 1963, Montréal singer Bob Davies released a single entitled "Gordie Howe," which repeatedly described him as “the greatest of them all.” The song became a popular hit that received extensive airplay. He is included in an episode of the long-running TV series The Simpsons. A lead character in the hit movie Ferris Bueller’s Day Off (1986) wears his number nine Red Wings jersey for much of the film. Large statues of him are on display in Saskatoon, Saskatchewan, and inside the Red Wings' long-time home at the Joe Louis Arena in Detroit. In a 2014 poll, he was chosen as the most popular Red Wings player ever.

In his later years in the WHA, he came up against a very young Wayne Gretzky, who had idolized him as a youngster. In the years that followed, the two hockey legends formed a strong and enduring friendship. But perhaps the greatest tribute to him came more than half a century ago from his long-time on-ice nemesis, Maurice “Rocket” Richard of the Montréal Canadiens. During a fight, Howe had once knocked Richard cold with one punch, and their rivalry was heightened because the two teams faced each other in the league finals frequently as the NHL’s two top teams in the 1950s. Howe eventually eclipsed Richard as the game’s scoring leader (and later was eclipsed himself by Gretzky). But Richard, upon his retirement, said admiringly of him: “Gordie could do everything.”