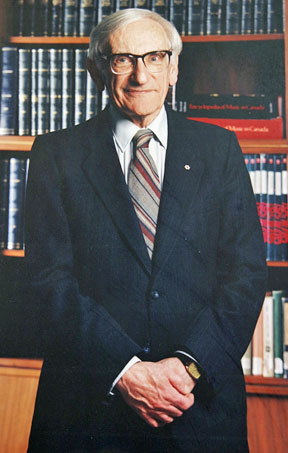 Helmut Max Kallmann, CM, music librarian, historian (born 7 August 1922 in Berlin, Germany; died 12 February 2012 in Ottawa, ON). A pioneering music historian, Helmut Kallmann was the foremost scholar of Canadian music history. The publication of his A History of Music in Canada 1534–1914 (1960), the subject’s first comprehensive treatment, established the field and encouraged other researchers. He was a librarian at the CBC, head of the music division at the National Library of Canada (now Library Archives Canada), and co-founder of the Canadian Music Library Association (now Canadian Association of Music Libraries). Kallmann co-edited both editions of the Encyclopedia of Music in Canada (1981 and 1992) and was a Member of the Order of Canada.

As a boy, Kallmann received informal piano lessons from his father, a lawyer and amateur musician, until being sent to England in 1939 as part of the Kindertransport rescue mission, in which nearly 10,000 Jewish children from Central and Eastern Europe were taken in by the United Kingdom in the months before the start of the Second World War. He lived for a short time in London, where he studied piano with Margery Moore and music theory with the Canadian Russell E. Chester. After the British government changed the status of Jewish refugees to “enemy aliens” he was imprisoned on the Isle of Man and then sent to Canada in 1940, where he was interned as a prisoner of war, first in New Brunswick and then in three camps in Québec, until 1943. He became a naturalized Canadian in 1946. His mother, father and sister were unable to get the necessary papers to leave Germany and died in the Holocaust.

In 1944, Kallmann settled in Toronto, where he studied piano with Naomi Adaskin, Greta Kraus (1944–45), and Florence Steinhauer (1947–48). From 1946–49, he studied music at the University of Toronto, were his teachers included Richard Johnston, Robert Rosevear, Arnold Walter and Leo Smith. Dismayed that no Canadian composers were included in the music history curriculum, Kallmann began to gather information on Canadian composers and search for published compositions, a project that would constitute his life’s work.

From 1950–70, Kallmann worked in the CBC Toronto Music Library, where he built up a substantial archive of approximately 1,000 Canadian compositions and organized performances of some of the works. He revised and edited the CBC’s Catalogue of Canadian Composers (1952) and wrote the seminal historiography A History of Music in Canada 1534–1914 (1960), the first book of its kind. He became the Music Library’s supervisor in 1962, and in 1965 he organized the 13-week CBC Radio documentary series, “Music in Canada.”

He then focused on more specialized areas, such as the history of Canadian music periodicals and music publishing, the biographies of Joseph Quesnel, Theodore F. Molt, and James P. Clarke, and the inventories of early printed music and Canadian-built, 19th-century instruments. This work contributed to the modern revival of important compositions including Quesnel’s Colas et Colinette, (ca. 1789) which was possibly the first operatic work composed in Canada, Siege of Quebec (see Battle Music), which was a tribute to General James Wolfe, and the nineteenth-century operas, Quesnel’s Lucas et Cécile, and The Widow, by Calixa Lavallée.

In 1970, Kallmann was appointed chief of the newly created music division at the National Library of Canada (now Library and Archives Canada), where he was responsible for building and preserving an all-encompassing collection of musical Canadiana comprising printed material, manuscripts and recordings. The music division soon became a pinnacle for research in its field. Kallmann was also a pioneer in planning musical exhibitions, including ones on the compositions of Healey Willan in 1972 and Glenn Gould in 1988.

After Kallmann retired from the National Library in 1987, a festschrift (a book honouring a respected academic) was published in his honour — Musical Canada: Words and Music Honouring Helmut Kallmann (1988), edited by John Beckwith and Frederick A. Hall.

Kallmann was the editor of the Catalogue of Orchestral Music (1957), published by the Canadian League of Composers, and wrote the preface for Giles Bryant’s Healey Willan Catalogue (1972). With Gilles Potvin and Kenneth Winters, he was editor of the Encyclopedia of Music in Canada (1981) and was responsible for its overall content. Kallmann and Potvin shared the editorship of the second edition of the encyclopedia, which was published in 1992.

Throughout its operation from 1982 to 2003, Kallmann was chair of the Canadian Musical Heritage Society, an organization devoted to locating, editing and publishing pre-1950 musical compositions. The Society produced 25 volumes of some 1,500 compositions by 1999. Kallmann also assisted a number of international music dictionaries, such as Grove’s Dictionary of Music and Musicians,to include or correct Canadian entries.

During his retirement, Kallmann produced a newsletter for his fellow Jewish internees. He also contributed numerous articles for scholarly publications in Canada and abroad, and was a contributing editor for the second edition of the comprehensive German music encyclopedia, Die Musik in Geschichte und Gegenwart.

Kallmann’s work and dedication helped facilitate the establishment of Canadian music courses at universities, and encouraged others to undertake or continue historical research and to perform older Canadian music. He was awarded the Canadian Music Council Medal in 1977 and was made a Member of the Order of Canada in 1986.

The Helmut Kallmann Award for Distinguished Service relating to music libraries and archives in Canada was established by the Canadian Association of Music Libraries in 2000. In 2006, he was the first librarian to receive the Friends of Canadian Music Award, given by the Canadian Music Centre and the Canadian League of Composers. In 2017, Carleton University created the Helmut Kallmann Chair for Music in Canada. The position, which the university said “will work with undergraduate and graduate students and research topics of Canadian music,” was first filled in 2019 and was made possible by a $2 million donation from Elaine Keillor.