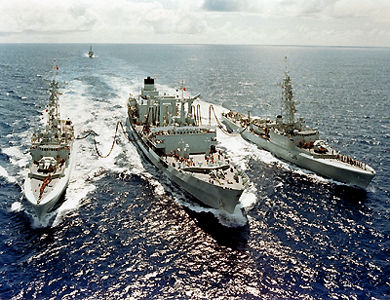 HMCS Kootenay was a destroyer in the Canadian Navy. In 1969, an accident at sea killed 9 sailors and injured 53 others. It was the worst peacetime disaster in the history of the navy. After the tragedy, Canada changed its law and provided for the repatriation of military personnel killed overseas.

HMCS Kootenay was a 111-metre-long Restigouche-class destroyer built at the Burrard Dry Dock, in North Vancouver, British Columbia. The vessel was commissioned into the Royal Canadian Navy on 7 March 1959 and was given the pennant number DDE (destroyer escort) 258. The ship was on active duty for more than 30 years before being "paid out," or decommissioned, in December 1995.

Kootenay left its home port of Halifax, Nova Scotia, on 5 September 1969 to participate in naval exercises, with ports of call in Bermuda, Denmark and Plymouth, England. On 23 October, Kootenay was in the North Atlantic, approximately 210 nautical miles west of Plymouth, as part of a task force of 10 ships and on its voyage home. The ship was sailing with a full complement of 12 officers and 237 seamen.

Early that morning, the Kootenay and HMCS Saguenay broke off from the task force to conduct full-power sea trials, routine tests conducted every quarter. Shortly after 8 a.m., while running at full power, the crew reported hearing a sound like “a rising organ note." Seconds later, a massive explosion rocked the engine room, sending a massive fireball through the ship’s main interior passageway. Within minutes, thick black smoke had spread throughout the ship.

Able Seaman Allan Bell, who suffered severe burns in the explosion, described the horrifying scene: “We heard a whoosh and then there was a wall of flame coming from the starboard gearbox. It was immediately followed by a blast of fire that whooshed all through the engine room. We were all almost immediately on fire.… You had nine people all trying to get up that ladder and all on fire.… You're on fire and your skin is falling off … and I knew that I was going to die."

The smoke inside the ship was so thick that men had to crawl on their hands and knees to locate escape ladders. Fighting the fire proved difficult. Much of the firefighting equipment was stored just outside the engine room and was damaged in the explosion. Some crew members donned scuba-diving breathing apparatus to help them search for and aid victims.

Helicopters from other ships in the task force quickly flew additional firefighting and medical crews to Kootenay. Dozens of injured seamen suffering burns and severe smoke inhalation were evacuated by chopper to HMCS Bonaventure. Some were later transferred to hospitals in the United Kingdom. Eight other men were dead.

By noon, the crew had extinguished the fire and Kootenay was being towed by Saguenay back to Plymouth.

When Kootenay arrived in Plymouth, the navy began preparations for funeral services for the eight seamen. At the time, Canadian military policy dictated that personnel who died overseas must be buried there. The men’s families were given two choices — interment in a cemetery in England or burial at sea. Four families chose interment; four chose burial at sea.

"To exclude a man's family from his funeral service… it still really, really bothers me."

Surviving crew complained about their treatment by the navy while Kootenay lay tied up in Plymouth waiting to be towed back to Halifax. Crew member Jim Stutely described conditions on board the ship: “For the next three weeks I lived in 3 Mess … on that horrible, dark, burnt, foul smelling coffin of a ship while someone in Canada decided what to do with the remaining crew.… To me that was a total disgrace, to say the least, by our leaders.”

Some of the injured crew were sent home on board Bonaventure. Just a few days outside Halifax, Petty Officer Lewis Stringer, who was suffering from smoke inhalation, died of a heart attack. He is the only victim of the tragedy to be buried on Canadian soil.

On 16 November 1969, Kootenay was towed out of Plymouth with a skeleton crew of just over 60 men on board. The ship arrived back in Halifax 11 days later.

Earlier, immediately after the ship had been towed to Plymouth, the Canadian Navy launched a formal board of inquiry and a full technical investigation. In December, the investigation found that the explosion in the ship’s gearbox was caused by human error — a faulty installation during a refit four years earlier.

“The explosion is considered to have been caused by the spontaneous ignition of oil and oil vapour through the gross overheating of the high speed pinion bearings," the investigation report concluded. "The cause of the overheating was the incorrect fitting of the insert bearing shells, which resulted in the direct oil supply being completely cut off.”

The board of inquiry made a number of recommendations regarding the location of firefighting equipment, first-aid training, and the location and design of escape hatches.

The report also praised the actions of the crew of Kootenay, noting many rushed to the scene of the explosion “without regard to personal safety to save lives and tend to men trapped in isolated places,” and it concluded that the officers and men on board “behaved in meritorious fashion” to fight the fire and save the ship.

The decision not to repatriate the remains of the men who died created anger in Canada. The military’s policy to bury personnel where they died dated back to the First and Second World Wars, when the sheer volume of casualties made it impossible to bring their remains home. But shortly after the Kootenay tragedy, the Parliament of Canada changed the law; today the remains of all military fatalities are returned home to their families.

In Halifax, Kootenay underwent a major refit, returning to active duty in January 1972. The ship was decommissioned from active service on 18 December 1996.

In 2002, the navy opened a new firefighting training facility at Canadian Forces Base Halifax. It was named the Damage Control Training Facility Kootenay, to honour the men who died and the lessons learned in the Kootenay tragedy.