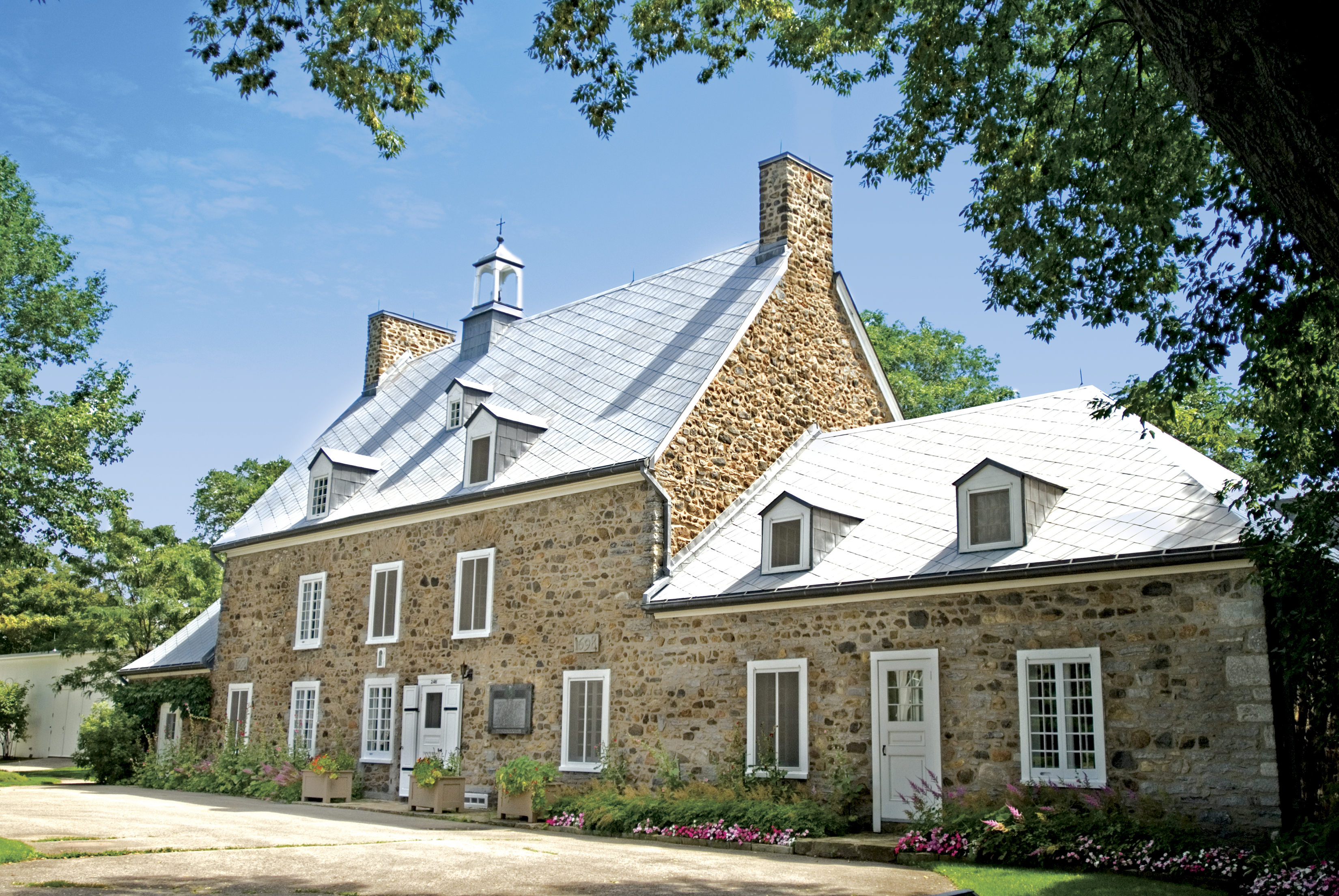 Maison Saint-Gabriel is a museum and historic site that openedin 1966. This 300-year-old building, located in Montréal’s Pointe-Sainte-Charles district, is one of the finest examples of the traditional architecture of New France. It served, notably, as a home for the Filles du Roi.

After leaving her native Champagne in 1653, Marguerite Bourgeoys founded the Congrégation de Notre-Dame in 1658. That same year, she opened the first school in Ville-Marie (Montréal). Not yet satisfied with her achievements, she obtained a land concession from Paul de Chomeday de Maisonneuve in 1662 with the goal of providing free education to children and new immigrants (see History of Education).

In 1668, she decided to buy the adjacent land, which included a fieldstone house. Built in 1660 by François Le Ber, the house was located in an area named Pointe-Saint-Charles in honour of Bishop Charles Borromée. There, Marguerite Bourgeoys established a model farm that met her congregation’s essential needs.

Until 1673, the 30-acre farm housed the Filles du Roi, young women sent to New France to find husbands and start families. It was also used as a small school.

Marguerite’s friend Catherine Crolo, born in Lauzon in 1619, decided to join her in Ville-Marie. While Marguerite taught, Catherine took responsibility for household duties and in 1668 she became the first manager of Maison St-Gabriel and its farm, called La Providence. She oversaw the clearing of the land and the planting and harvesting of crops.

In 1693, a devastating fire destroyed the entire house, sparing only the dairy and a lean-to. In 1698, the Communauté des habitants rebuilt the house on its original foundations. In 1826, the workers’ quarters were added to provide lodging for farmhands, and an impressive stone barn was built in 1880.

For almost 300 years, this jewel of French architecture was maintained by the nuns of the Congrégation de Notre-Dame de Montréal. The farm at Pointe-Saint-Charles was a sharecropping farm. From 1668 to 1955, the farming sisters of the congregation cultivated the land and gave the fruits of their labour to the community. Over the farm’s history, it had 86 tenant sharecroppers.

Maison Saint-Gabriel, so named in 1930 in honour of a Sulpician priests’ farm erected in 1659 and destroyed in 1883, was declared a historic site by the Commission des monuments historiques de Québec in 1965. In 1966, after restoration, it became a museum with a focus on presenting various aspects of rural life.

In 1992, the Ministère de la Culture et des Communications de Québec designated Maison Saint-Gabriel a historic site. It thus became a unique location for raising awareness of Québec’s French regime heritage and history. In 2001, the Farmhouse Garden was recreated in the style of New France, and in 2007 the site’s wooded area was converted into a glade showcasing indigenous plants and shrubs typical of the St. Lawrence plains. An arboreal circuit exhibits approximately 20 species of trees; some specimens are over 100 years old.

In 2007, Maison Saint-Gabriel was designated a national historic site of Canada. Thanks to several million dollars’ worth of investment, the museum site was expanded and the new Catherine-Crolo pavilion was added in memory of the first managerof the congregation. The former nuns’ residence was converted into a visitors’ pavilion. Every Sunday during the summer, artists breathe life into the site with historical recreations in period costume and short historical skits that evoke, more powerfully than words, the daily life of New France’s inhabitants.

The museum and historic site has received a number of honours and awards. Since 1999, Maison Saint-Gabriel has been a four-time recipient of the prestigious Prix Ulysse, awarded by Tourisme Montréal (1999, 2003, 2007 and 2010). In 2004, it earned an A+ overall rating in an assessment of Québec’s museums for its broad range of activities and the high quality of its visitor services. The same year, the Conseil des monuments et sites du Québec awarded it a certificate of honour in recognition of its contribution to Québec heritage conservation and development.

In 1998 and 2005, the Corporation du Pôle des Rapides awarded the site the Prix Explorateur, highlighting its contribution to the development of southwest Montréal as a historical and cultural destination. Again in 2005, the institution was the recipient of the Grand Prix du tourisme québécois for its exceptional quality of service. More recently, Maison Saint-Gabriel received the 2014 award of excellence in heritage interpretation from the Association québécoise des interprètes du patrimoine.

As the museum’s general manager since 1997, Sister Madeleine Juneau (Congrégation de Notre-Dame) has received a number of honours for her outstanding work. She was awarded the title of business personality of the year (2004) and UNIO personality (2006) by the Chambre de commerce et d’industrie du grand Sud-Ouest de Montréal (Southwest Montréal Chamber of Commerce). In 2006, she won the Québec Businesswoman’s Award in the “executive or professional employed by a non-profit organization” category, and in 2009 she received the Prix Bâtisseur du Sud-Ouest from the Regroupement économique et social du Sud-Ouest (RESO). She is a recipient of the Medal of the National Assembly of Québec (2011) and of a Queen Elizabeth II Diamond Jubilee Medal (2012). In addition, she won the Ordre des architectes du Québec’s Thomas-Baillargé award (2012) and the Québec government’s Gérard-Morisset award (2013) for her contribution to the preservation and development of Maison Saint-Gabriel.

The Maison Saint-Gabriel museum is living proof of the history of Montréal. Over the years, its high-quality exhibits and services have given visitors a thirst for more information about the people who founded and built French North America.