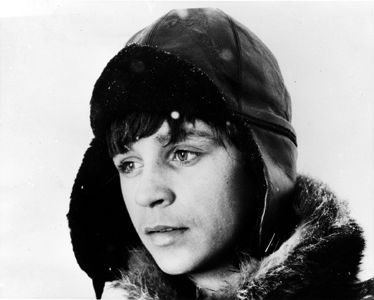 Set in a small Québec mining community on Christmas Eve “not so long ago” — as a caption at the beginning of the film explains — the action of Mon oncle Antoine revolves around a family store owned by Antoine (Jean Duceppe), who also operates the local undertaking business. Its central character, Benoît (Jacques Gagnon), is a young orphan who lives with his uncle and aunt Cécile (Olivette Thibault) at the store, and observes the adults around him with an amused but critical eye. An important subplot involves the Poulin family, who live on an isolated farm. The patriarch, Jos Poulin (Lionel Villeneuve), quits his job at the asbestos mine after an argument with an English-speaking foreman and leaves home to work in a logging camp.

When the Poulins’ eldest son dies suddenly, Antoine and Benoît set out for the farm in a snowstorm but, on their return journey, the coffin falls from the horse-drawn sleigh. After realizing that Antoine is too drunk to help retrieve the coffin, Benoît returns to the store where he finds Cécile in bed with the store’s clerk, Fernand (Claude Jutra). Fernand and Benoît try to find the coffin but arrive at the Poulin farm to find Jos, who has returned for Christmas, and his family gathered around the open coffin.

The film draws the audience into Benoît’s perspective on his community, and much of its appeal derives from its depiction of an apparently simpler past through the eyes of a child. As he observes the weaknesses of Antoine and other possible father figures, Benoît struggles to cope with his own fears of sexuality and mortality. The final freeze-frame close-up — in which Benoît peers at the Poulin family, gathered around the coffin in a grotesque parody of the nativity scene — challenges the spectator to decide what has changed and what has not since the vaguely defined “not so long ago” depicted in the film.

The film has been read by many as an indictment of pre-Quiet Revolution Québec. Film scholar André Loiselle has also argued that Mon oncle Antoine “offers an engaging metaphor for Québec’s transition from traditionalism to modernity,” as well as “an insightful commentary on Québec’s persistent inability to choose between the dream of independence and the safety of Canadian federalism.”

One of the first Québec films to reach a wide audience in English Canada, Mon oncle Antoine also won acclaim in the United States, the United Kingdom and France. However, some critics in Québec found fault in what they considered the film’s “formal weaknesses,” such as a “poorly balanced” and “badly constructed” narrative, and accused Jutra of evading urgent social and political issues following the October Crisis (the film was made before the crisis but released after it). Yet, the film's view of the past is far from nostalgic. Its critical perspective might have been more apparent if the filmmakers had used the original title, Silent Night, an English phrase alluding to the Christmas season but also to the dark period in Québec history — La Grande Noirceur — before the Quiet Revolution.

Mon once Antoine won over 20 international prizes and eight Canadian Film Awards, including Best Feature Film, Direction and Original Screenplay. It demonstrated the possibilities of Canadian cinema at a time when few Canadian feature films had achieved widespread critical or commercial success. At least two reviewers welcomed it as “the great Canadian movie” and it has maintained that reputation ever since. In 1980, it was voted the best film ever made in Québec in a poll of critics conducted by Séquences magazine, and it consistently topped lists of the Top 10 Canadian Films of All Time conducted by TIFF until 2015, when it was unseated by Atanarjuat (The Fast Runner).

Mon oncle Antoine is also considered one of the most influential Canadian films ever made. As André Loiselle has argued, in the wake of the film’s success, “the coming-of-age film became something of a prototypical Canadian genre, with such films as Ján Kadár’s Lies My Father Told Me (1975), Allan King’s Who Has Seen the Wind (1977), Francis Mankiewicz’s Les bons débarras(1980), Jean-Claude Lauzon’s Léolo (1992) and Allan Moyle’s New Waterford Girl (1999) trying to recapture the magic of Jutra’s masterpiece.”

In 2000, Mon oncle Antoine was named a Masterwork by the AV Preservation Trust. A special two-disc collector’s edition was released by The Criterion Collection in 2008. In 2016, it was named one of 150 essential works in Canadian cinema history by a poll of 200 media professionals conducted by TIFF, Library and Archives Canada, the Cinémathèque québécoise and The Cinematheque in Vancouver in anticipation of the Canada 150 celebrations in 2017.