"Three days after D-Day, I became a prisoner of war. There was about eight of us got nailed."

"Three days after D-Day, I became a prisoner of war. There was about eight of us got nailed." See below for Mr. Renwick's entire testimony. Please be advised that Memory Project primary sources may deal with personal testimony that reflect the speaker’s recollections and interpretations of events. Individual testimony does not necessarily reflect the views of the Memory Project and Historica Canada. 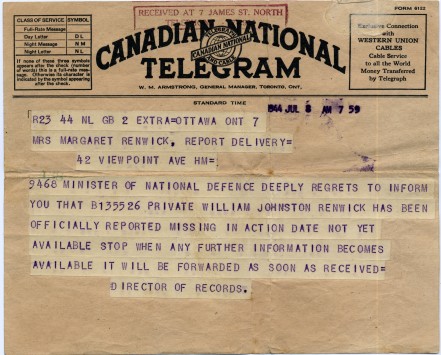 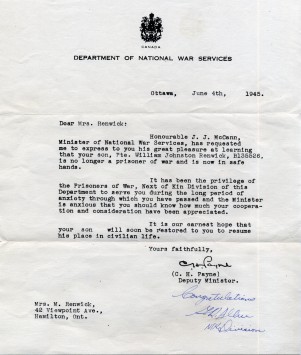 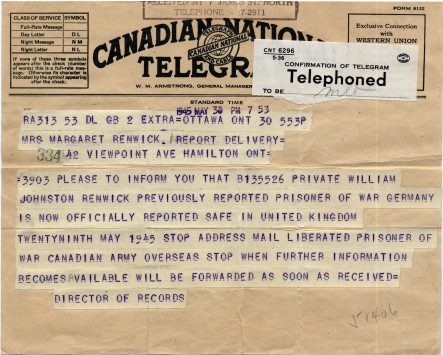 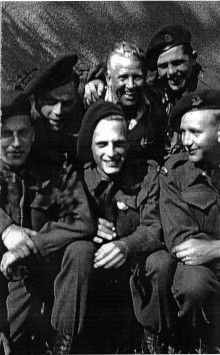 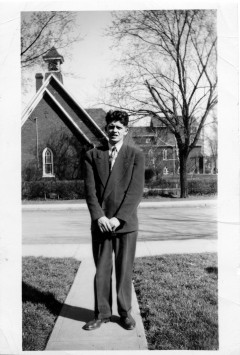 My name is Bill Renwick. I served with the 1st Canadian Parachute Battalion, rank corporal and served in World War II. I originally was born in Hamilton. Started to work in National Steel Car making shells. During the war we had to register so when the government sent people around to industries to find out who worked there and what their age was, I was two years older on what they figured I was. Because I lied about my age to get a job. But all of a sudden, I find out that people that I'm working with, most of them were going to war. And I decided I wanted to. So I went down to at the armouries and got through to the end where the doctor examined me and that and the guy said, "How old did you say you were?" Just at that time there was a sergeant stuck his head through the door and wanted to know if there was anymore ready who could go to Toronto. And the guys says, "You sure you're... you're eighteen?" And I said, "Yeah." And we jumped in in '44 - D-Day. Took off actually on June the 5th. Airborne Parachute's main business was to protect the east flank so that nobody could come across the... the river. Things could have been a lot worse on the beaches as they come in by the boats if we hadn't have been in ahead of it and we're quite proud of that. I seen a man... I seen a man with a cart about the second day. We were going down to check out an area to see if we could find out how many Germans was in it. And he was walking up the road and he had his daughter in his hands and he had a tarp over the... the wagon. And one of our guys, who spoke pretty good French, asked him if he'd seen any Germans up the road. He took the time to say they were around the bend where we were coming, there was a German machine gun nest. He couldn't thank us enough for coming. And yet you could see he had been crying and that. And in that cart, we found out after when the tarp was moved, that his wife and his son, who had been killed by our bombs - our bombers. And yet he could take the time to try and explain to us because here we were finally setting them free after four years or so under the Germans. It don't make any sense. You lose a family and yet you're shaking somebody's hand or kiss them on the cheek and saying, "Thanks for coming." Your mind becomes fuddled when you start seeing some of these things. Three days after D-Day, I became a prisoner of war. There was about eight of us got nailed. We got cut off in a field and eventually we had to capitulate. We were rounded up and taken into Paris, put in box cars and they were... finally worked their way down to where I was, down in a place called Mulberg on the River Elbe. It's a funny thing when you're in a prison of war camp, if you didn't live - I'm talking about thinking now - if you didn't live inside that compound, inside that barbed wire and concentrate on... and about thinking about home all the time, you could eventually go nuts. And the best way was to get through all them things was walk. Walk around the compounds or inside the camp and all that. And keep walking as much as you could because you don't realize what it does to you. I met a friend the first day I was in the camp. I went in the camp and a guy asked me where I was from and I said that, "I'm from Canada." He says, "I know that," he says, "but whereabouts?" I said, "Hamilton." And he said, "You know a Red Lowe?" And I said, "Yeah." And he was in the next compound. I went to school with this guy. (laughter) So there was a... right off the bat, there was a relationship. Until the Red Cross come through, I was just reported missing. The only way they confirmed anything right off the bat is if somebody had said, "Hey, I seen this happen. I seen this man get killed. I seen this man be taken prisoner of war." I read a telegram that my mother had received about my being missing and that and I can just picture the horrible feeling that a person must have to get a telegram about somebody they love. And it's kind of bothered me.