"We were a casualty clearing station on D Day. So we had boys back from the battlefield the same day."

"We were a casualty clearing station on D Day. So we had boys back from the battlefield the same day." See below for Ms. Breau-Theriault's entire testimony. Please be advised that Memory Project primary sources may deal with personal testimony that reflect the speaker’s recollections and interpretations of events. Individual testimony does not necessarily reflect the views of the Memory Project and Historica Canada. 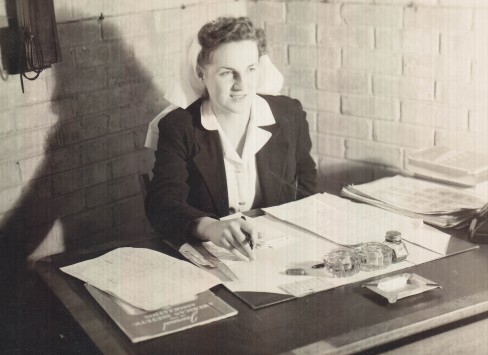 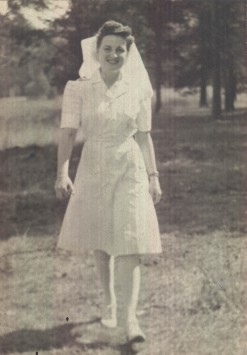 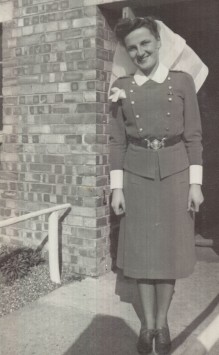 I was born in Moncton, New Brunswick in 1919. I studied Home Economics at St. Francis Xavier University in Antigonish and did post-graduate work at St. Michael’s Hospital in Toronto. I was taking dietetics and diet therapy, nutrition. A friend of mine enlisted and she kind of prevailed upon me to do the same thing. And they needed dieticians at the time.

I enlisted in Kingston, Ontario. And I spent some time there before going to Debert Nova Scotia and overseas. And we left Canada and we were 14 days at sea because it was the time when there were a lot of U boats in the harbour, at Halifax. But it was quite interesting. We went in convoy and we went south, first north to the coast of Labrador and then south and picked up the American convoy, part of the convoy. And then we went to the Azores, way down near the coast of Spain and up, zig-zagged up, back up the Atlantic Ocean through the Irish Sea to Oban in Scotland.

And we stayed overnight in Oban and went down to London by train the next day. That was our first experience of being in the blackout and hearing bombs dropping. That was quite, quite an exciting time.

And when we were working as a casualty clearing station, the patients were checked and the ones who needed surgery immediately were kept and the others were shipped off to other hospitals, depending on their condition.

And I would go over to the hospital and usually we had menus made out for each week and we had to order food from NAAFI and service car, army service car. And we did that through the quarter master. And we checked on the food and chefs and went over the special diets. And it was quite, we were a casualty clearing station on D-Day. So we had boys back from the battlefield the same day. And some of our people went up and brought them back.

And it was so sad to see some of the young German prisoners. They were terrified because they didn’t know what to expect, what kind of treatment to expect from Canadians. And they were so young. I remember waking up that morning and the sky was filled with planes and there was continual flights going over across the channel. And we had been expecting it all along but when it actually happened, it was really something.