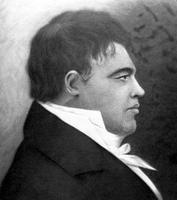 Fraser was the first to descend the river that bears his name, and founded the earliest settlements in central BC (courtesy PABC).

New Caledonia ("New Scotland"), was a name given in 1806 to the central and highland plateau area of British Columbia by Simon Fraser, a partner, trader and explorer in the North West Co. Fraser had never been to Scotland, but the BC interior reminded him of his mother's descriptions of the Scottish Highlands. New Caledonia became a trading department or district for the NWC, and had its headquarters at Fort St James, built in 1806 on Stuart Lake. Nearby were Forts Fraser and George, the latter at the junction of the Nechako and Fraser rivers, from which Fraser began his celebrated exploration of the river, named after him, that drained New Caledonia to the south.

Other names for the central interior appeared on maps at this time: the Americans called it Oregon; Capt George Vancouver called it New Hanover; and British fur trader James Colnett called it North West Georgia. However, the NWC's dominance of the Fur Trade of the BC interior, until the 1821 merger with the Hudson's Bay Co, assured the continuance of the name New Caledonia.

In 1858 legislation was introduced to create a crown colony to bring British law and authority to an area undergoing a Gold Rush and rapid population expansion. Colonial Secretary Sir Edward Bulwer-Lytton called the region New Caledonia; however, the French possessed a South Pacific colony called New Caledonia, and to avoid confusion or resentment the name was changed to British Columbia. Queen Victoria made this choice, and New Caledonia became British Columbia on 2 August 1858. Thereafter the earlier term gradually disappeared from general use.