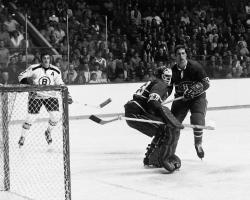 Esposito was the inspirational leader of Team Canada during the dramatic CANADA-SOVIET HOCKEY SERIES of 1972. He was traded to the New York Rangers in 1975 and retired in 1982, second then only to Gordie HOWE in both goals (717) and points (1590) on the all-time NHL scoring list. He became general manager of the New York Rangers in 1986, rapidly transforming the team with a flurry of trades. Esposito was fired by the Rangers following the 1988-89 season. In 1991 he was named president and general manager of the expansion Tampa Bay Lightning, which began its first NHL season in 1992-93. He retired in 1998 but continues to serve as colour commentator for the team. Phil Esposito was made an Officer of the ORDER OF CANADA in 1972 and was named to the HOCKEY HALL OF FAME in 1984.