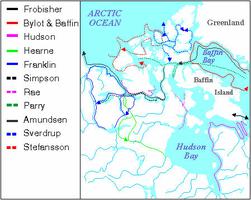 Robert Bylot, (fl 1610-16), English seaman, was the mate on Henry Hudson's ill-fated voyage of 1611. He was deprived of his rank just prior to the marooning of Hudson in James Bay, joined the mutineers, but was later pardoned, likely for his skill in bringing the ship home. In 1612-13 he sailed with Sir Thomas Button to Hudson Bay. In 1615 and 1616, with William Baffin as pilot, he made 2 voyages in the Discovery to the eastern Arctic. In the first, the 2 men demonstrated that Hudson Str was not the Northwest Passage. In the second, Smith, Jones and Lancaster sounds were located, and a "farthest north" was reached at 70°45´, a record not broken for 236 years. Bylot was a skilled ice-pilot and a capable seaman, but little else is known of his life.