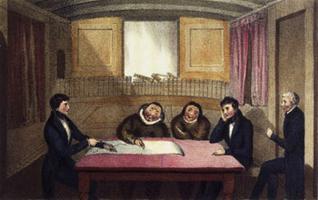 Ross created detailed images of the Inuit he met. Here two Inuit men, Ikmalick and Apelagliu, give directions to Ross and his men (courtesy Library and Archives Canada/nlc707).
The title page of Sir John Ross' account of his journey, entitled Narrative of a Second Voyage in Search of North-West Passage, and of a Residence in the Arctic Regions During the Years 1829, 1830, 1831, 1832, 1833 published in 1835 (courtesy Library and Archives Canada/nlc1487).
PreviousNext

Entering naval service at the age of nine, and wounded during the Napoleonic Wars, Ross had been at sea for 30 years when in 1817 he was ordered by the Admiralty to command an expedition to explore Baffin Bay. From 1829 to 1833 he commanded a second expedition in the Lancaster Sound-Somerset Island region. For four winters his ship, Victory, was ice-bound off the coast of Boothia Peninsula (and in 1831 his nephew and second-in-command, James Clark Ross, located the North Magnetic Pole on the peninsula's west coast). Released by the ice in 1833, the ship returned to England, where Ross was knighted. In 1850 he commanded Felix in an unsuccessful search for the lost expedition of Sir John Franklin.