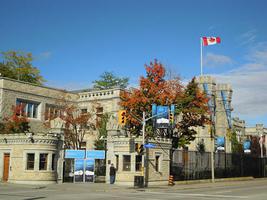 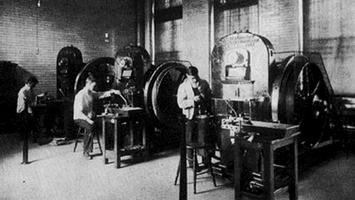 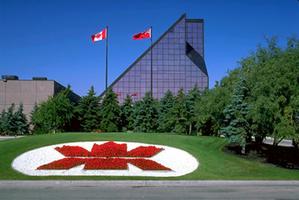 Since 1974 the mint that opened at Winnipeg, Man, has shared with Ottawa the production of the nation's coinage (photo by Egon Bork/courtesy Canadian Tourism Commission). 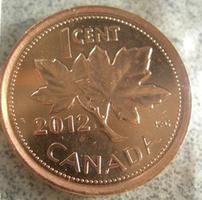 The last Canadian penny was minted on May 4, 2012 at the Royal Canadian Mint in Winnipeg (public domain).
PreviousNext

From 1858 to 1907 most issues of Canadian coins were struck at the Royal Mint in London, England, with additional issues from the Heaton Mint of Birmingham. The official opening of the Ottawa Branch of Britain's Royal Mint on January 2, 1908 was commemorated with the striking of a fifty-cent piece. The Mint's historic site on Sussex Drive is still in use today.

The early years saw the Mint efficiently producing gold Sovereigns, Canadian coins and millions of ounces of refined gold. The Mint even produced gun parts for Britain during World War I.

The Royal Canadian Mint was officially placed in Canadian hands on December 1, 1931, reporting to the Department of Finance. After many years of establishing new coinage and refining records, the Mint became a Crown corporation on April 1, 1969.

Today the Royal Canadian Mint strikes coins for foreign countries as well as for Canada. Since 1974, the mint that opened in Winnipeg, Manitoba, has shared with Ottawa the production of the nation's coinage. The Winnipeg facility produces circulation coins while the Ottawa facility produces numismatic products.

To make coins, the metal is mixed in a melting pot and cast into bars. The bars are softened by a heat treatment and rolled to an exact thickness, from which the blanks are cut. The blanks are cleaned, polished and sent to the coining room, where they are struck by dies. A die is developed by a lengthy and painstaking process. Blanks are fed into the coining chamber, where a metal fork pushes a fresh blank over the hole in the collar and at the same time pushes away the coin just struck. The blank, being slightly smaller than the diameter of the hole in the collar, drops in and comes to rest on the bottom die. The top die then descends and makes contact with the blank. This causes the blank to expand, filling the crevices of the dies and the collar to become a coin. Struck coins are collected, examined, counted and bagged for issue. (See also Coins and tokens).