By about AD 900, the combination of chemicals which go into gunpowder were known and about 200 years later the proportions were identified that would produce the gas necessary to discharge a projectile. It was not until about AD 1280 that the Chinese invented the gun barrel to contain the powder, and the firearm came into being.

Although firearms are mentioned frequently in literature, the earliest European illustration of one is found in a manuscript from 1326 now at Oxford University.

Most early guns were muzzle-loading; i.e., the powder was put into the breech from the muzzle and a ball was put on top of it. A red-hot wire or coal was used to ignite a small "train" of powder leading, through a vent at the breech, to the main charge. The burning powder produced a tremendous amount of gas, which propelled the ball out of the barrel and towards the target.

The early development of firearms was very slow. "Hand cannons" light enough to be carried by one man were produced, but the method of firing did not change for about 100 years. About 1400 a mechanical device was invented, consisting of a lighted wick of twisted hemp that could be drawn by means of a lever into a pan at the breech. The result was the first self-contained small arm, the matchlock musket. When Sir Humphrey Gilbert landed in Newfoundland in 1583, his ship was armed with cannon and some of his men carried matchlock muskets.

In the late 15th century a wheel-lock mechanism, which used a stone (iron pyrite) rubbed against a revolving steel wheel to produce a spark, was invented in Italy. The spark ignited the priming powder to discharge the gun. News of this improvement moved slowly through Europe. The device was fragile and expensive and, although it was made in large quantities for hunting by the nobility, it did not become a "general issue" military arm. When Pierre du Gua de Monts and Samuel de Champlain were outfitting their expeditions to inhabit Canada, they brought with them cannons and matchlock muskets. By 1619 there were also at least 2 of the expensive wheel locks in the habitation at Québec, along with 3 small cannons and 6 breech-loading swivel guns.

About the time Champlain was establishing Québec (1608), a French gunsmith of the Le Bourgeoys family was perfecting an inexpensive and efficient lock mechanism that represented a real advance in metallurgical knowledge. The flintlock, as it was known, positioned a piece of flint in the jaws of a vise or "cock" powered by a strong "V" spring. When the trigger was pulled, the cock fell forward, the flint struck a steel plate (battery), the sparks produced fell into a small pan of priming powder, and this ignited the main charge. The flintlock rapidly became the most common and best form of firearm available. It was rapidly adopted by the settlers of America and quickly found its way into the hands of the Indians. Gunsmiths and gunmakers in Canada copied designs originating in France or England and supplied a small portion of the local requirement, although most guns were imported by the trading companies or merchants. 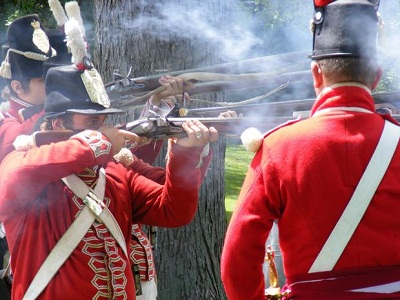 The flintlock remained fundamentally unchanged until replaced in the first half of the 19th century. In 1807 Alexander Forsyth, a Scottish clergyman, patented a lock that used a small amount of fulminate to ignite the main charge. This development quickly led to the invention of the percussion cap (about 1818), the separate primed paper or metallic cartridge (about 1821) and the self-contained cartridge (about 1826). Canadian gunmakers quickly adopted these innovations and developed improvements of their own. The first guns found that are known to have been made in Canada date from the 1830s. William Gurd of York [Toronto] made guns that had locks converted from flintlocks. The pistols and rifles made by J. Woods of Brantford are marked with an Upper Canada address, indicating that Woods was the proprietor of a "Rifle Factory" prior to 1840.

The greatest difficulty in perfecting a breech-loading gun was preventing the escape of gas through the breech. This problem was resolved by the invention of a thin-walled metallic cartridge which expanded to produce a seal and then contracted, after the gas had left the barrel, to allow removal of the cartridge case. Development of the cartridge took place mainly in the US, Britain and France. Dudley Booth of Ottawa invented an unsuccessful breech loader and its cartridge in 1867, and several other Canadians obtained patents for breech-loading guns in the period 1850-80. A few of these obtained some local acceptance, but none achieved national recognition.

Most of the firearms used in Canada were imported from England or the US: fine shotguns from Britain, rifles from the US, pistols and revolvers from both countries. Arms with serial numbers under 100, by all major US makers, have been found in Canada. In 1866 Smith and Wesson, the large revolver manufacturers of Springfield, Massachusetts, first advertised in the Oshawa, Ontario, Vindicator.

Military weapons were supplied in large quantities from England. Canada was usually used as a proving ground for cold-weather trials of most new weapons, and many were not produced because of the experience gained. The first shipment of Snider-Enfield breech-loading rifles was sent to Canada in 1866, when threats of a Fenian invasion from the US were prevalent. Smaller quantities of American-made weapons were purchased for Canadian militia use. In 1855-56, 800 Colt Navy Model 1851 revolvers were purchased for the militia cavalry of the Province of Canada. These are easily recognized by the company markings and numbers on the grips. In the 1860s a quantity of Spencer repeating rifles and carbines was purchased along with those of other manufacturers. In 1885 the North-West Mounted Police placed the first of many orders for Winchester Model 1876 carbines. In the same year the Colt Repeating Arms Company lent Canada 2 Gatling guns under the command of A. L. Howard of the Connecticut National Guard for use in the suppression of the North-West Rebellion. Howard remained in Canada to establish the Dominion Cartridge Company at Brownsburg, Québec.

At the same time, Canadian gunmakers were supplying fine-quality target rifles to the militia and sporting rifles to farmers, hunters and sportsmen. The skills of some gunmakers were as good as any in the world, and the accuracy of their rifles was equal to that of the finest English makers. James Paris Lee came to Canada as a youngster from Scotland and was educated in Galt [Cambridge, Ontario]. He was trained as a jeweller and set up business in Chatham, Canada West, in 1850. Lee later moved to Janesville, Wisconsin, where he developed a number of firearm designs, one of which was the bolt-action rifle, which later became the basis of the Lee-Enfield rifle, manufactured for Commonwealth troops until 1950. The Lee-Enfield rifle was used by Canadian troops through 2 world wars.

About 1900, Sir Charles Ross, the designer of a bolt-action rifle which was being made for him in the US, moved to Canada and interested the Canadian government in his design. A factory was established at Québec City, and the first shipment of the Canadian-made Ross rifle was turned over to the government in 1905. The Ross went through many variations until it was replaced by the Lee-Enfield rifle during WWI.

Beginning in the mid-1860s, the demand for custom-made guns was slowly replaced by that for machine-made repeating rifles, most of which could be produced more economically in the US. Nevertheless a few excellent gunmakers have continued to work in Canada. Although very few of them have made much money, they have continued a tradition by making fine rifles to meet the requirements of Canadian sportsmen. (See also Armaments.)