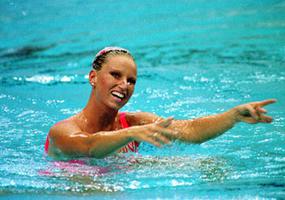 Carolyn Waldo at the 1988 Seoul Olympics. She won a gold medal in solo synchronized swimming Teamed with Michelle Cameron, she also won gold in the team competition and became the first Canadian woman to win 2 gold medals at an Olympic Games (photo by Fred Chartrand, courtesy CP Archives).
PreviousNext
Synchronized swimming is the performance in water of a series of movements in time to music. It is a popular activity for many in North America and increasingly so around the world. Canada has developed an excellent recreational program for all ages and skill levels called the "Star" program, and has a highly developed competitive program as well as programs for training both officials and coaches.

The governing body of synchronized swimming in Canada is Synchro Canada. The basic skills of synchronized swimming are strokes and figures, which were originally part of the Royal Life Saving Society program. In 1924, the first competition in strokes and figures in Canada was held at the YWCA in Montréal. In the following 2 years, swimmers in Ontario and Québec became more interested in this kind of competition, and the first Dominion championship in strokes and figures was held at the Montreal Amateur Athletic Association in 1926. Margaret Shearer (Mrs Peg Seller) became the first Canadian champion, winning the Frances C. Gale Trophy. The rules for this competition changed slightly over the years, but the trophy has continually been in competition to the present time.

By 1954, Canadian synchronized-swimming championships included competitions in solo, duet and team, and Canadian synchronized swimmers have competed around the world. The 1979 Canadian Female Athlete of the Year, Helen Vanderburg, won gold medals in Canadian, PAN-AMERICAN, Pan-Pacific, FINA Cup and World Aquatic championships in 1978 and 1979. Synchronized swimming was in the Olympics for the first time at the 1984 Los Angeles Games; Canada's duet and solo entries placed 2nd behind the US.

Carolyn WALDO won the solo world championship twice before winning gold in both solo and duet with Michele Cameron at the 1988 OLYMPIC GAMES. Sylvie FRECHETTE was solo world champion in 1991, but she lost the gold medal in a highly controversial judge's error at the Barcelona Olympics, settling for the silver medal. In 1993 Frechette was finally awarded the gold medal after a successful appeal. The Vilagos twins, Penny and Vicky, also won silver in duet at the 1992 Games. The solo and duet competitions were replaced in the 1996 Olympics in Atlanta by a team competition, in which the Canadian team (which included Frechette) won the silver medal. At the 2000 Sydney Olympics the Canadian team won the bronze medal.