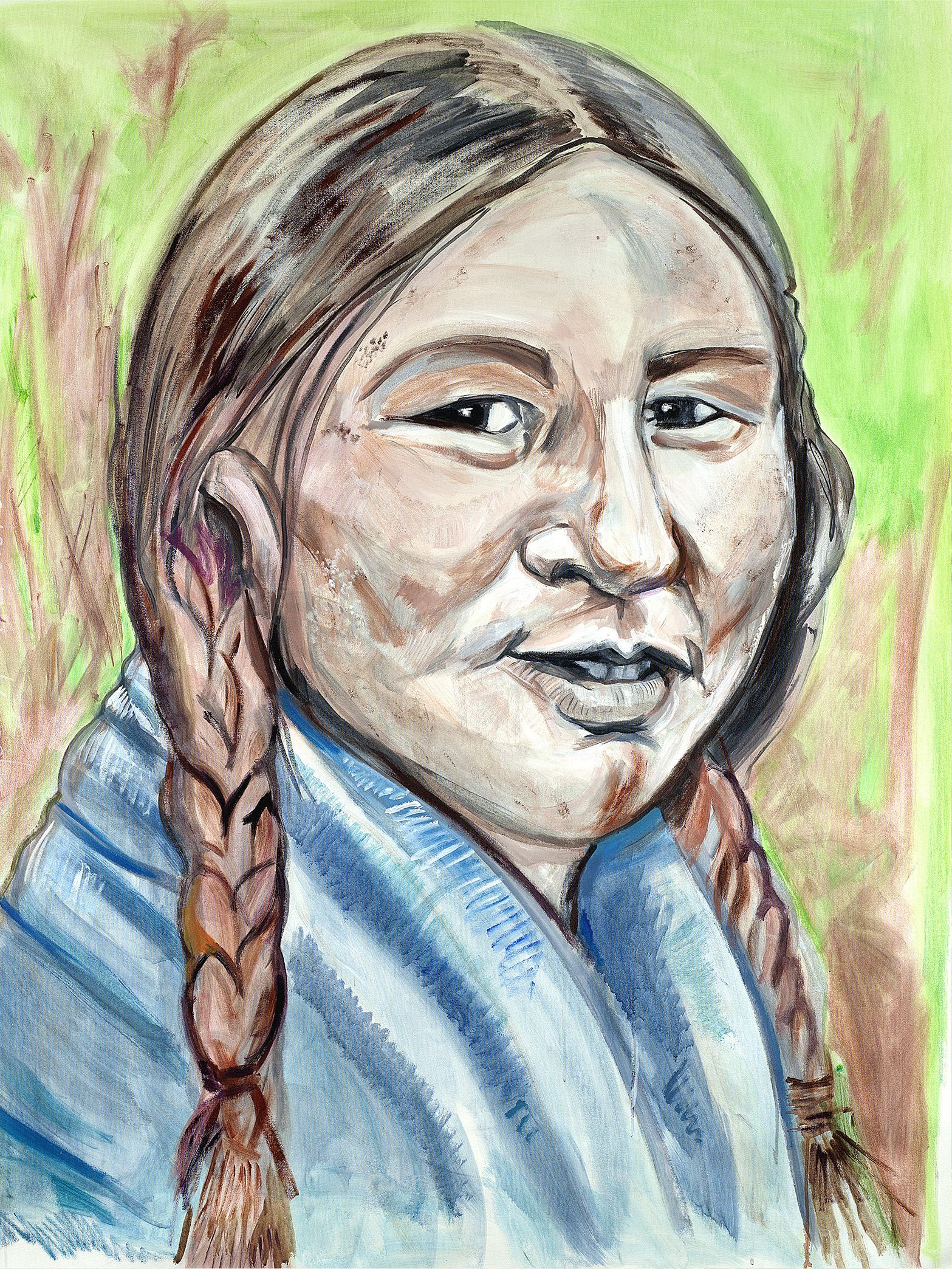 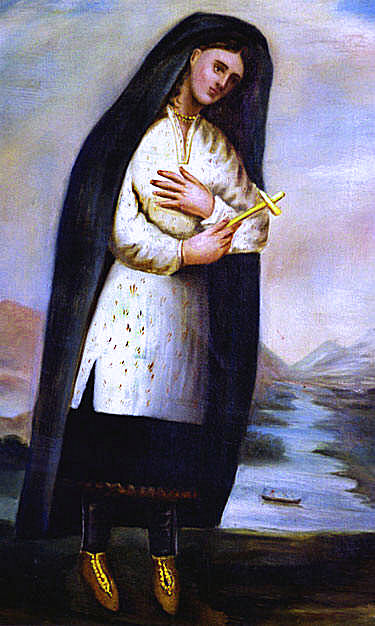 Childhood and Conversion to Christianity

Tekakwitha was born to a Mohawk father and Algonquin mother. She was orphaned in 1660 at the age of four when a smallpox epidemic wiped out most of her village, killing her parents and younger brother. The young Tekakwitha survived but was badly scarred and her eyesight was impaired.

In 1666, the French launched a punitive expedition against the Mohawks and destroyed Tekakwitha’s village. Her people then chose to move across the Mohawk River, to Gandaouagué. In 1667, three Jesuit missionaries arrived and established the St. Pierre Mission.

Tekakwitha made friends with Father Jacques de Lamberville who was in charge of the mission. In 1675, she shared with him her desire to be baptized. Lamberville taught her the catechism and at Easter 1676, baptized her as Catherine. Tekakwitha was then 20 years old. The name given her was in honour of Catherine of Siena, a 15th century Italian mystic. Today, Kateri instead of Catherine is used to identify Tekakwitha due to the influence of 19th century romantic literature and the desire of biographers to give her a more Aboriginal sounding name.

Tekakwitha’s biographers, who contributed to the growth of her cult, insisted on the fact that, even before converting to Christianity, she was in disagreement with the way of life and values of the Mohawks. Her refusal of a number of marriage proposals and her desire to remain a virgin, both of which were contrary to her people’s customs, are used to support this argument.

Her baptism and subsequent first communion in 1677 made her the target of persecution in her village. With the help of Father Lamberville, Catherine, along with other converted Mohawks travelled several hundred kilometres to reach the St. Francis Xavier Mission at Sault St. Louis (today the Kahnawake reserve). There she joined a group of Christian Iroquois women (Haudenosaunee) who had chosen to renounce sexuality and marriage and who practiced mortification. Catherine submitted herself to severe physical discipline, fasting, flagellation and exposure to the pain of fire and cold.

On March 25 1679, the feast of the Annunciation, the Jesuits allowed Catherine, who had demonstrated exceptional piety, to take a vow of perpetual chastity in private. However, life was precarious in a period marked by wars and epidemics. Catherine, whose health was fragile, died on April 17 1680, following a long illness perhaps brought on by her excessive practices.

Claude Chauchetière (1645-1709), a young Jesuit, took to visiting Catherine’s bedside during the last weeks of her life. In his writings, he describes himself as being fascinated by Catherine’s calm and composed attitude to her approaching death. Even before she fell ill, her confessor, Father Pierre Cholenec (1641-1721), mentioned in a confidential letter to his superiors that Catherine was the “most fervent” of all the young Iroquois women who practiced prayer and penitence. He also mentions a mysterious light that surrounded her during self-flagellation. The missionaries and Christian Iroquois appear to have been attributing spiritual powers to Catherine while she was still alive and her attitude towards death provided them with further confirmation.

In 1681, Father Chauchetière wrote a biography of Catherine and painted her portrait. In another biography, written by Father Cholenec in 1696, the author reports that 15 minutes after Catherine’s death the smallpox scars disappeared and her face became white and shone with beauty. For the Jesuits this was the first miracle and the birth of the legend of the Iroquois virgin, Catherine Tekakwitha.

On 3 January 1943, Catherine was declared venerable by Pope Pius XII. Following this Vatican recognition of her exemplary Christian practices, she was beatified by Pope John Paul II on 22 June 1980. This allowed her to be venerated publicly and her feast day, 17 April, was entered into the liturgical calendar of the Catholic Church.

December 19 2011, Pope Benedict XVI acknowledged a miracle attributed to Catherine, that of healing a young boy in Washington State in 2006. The boy, Jake Finkbonner, had contracted necrotizing fasciitis; also know as “flesh eating disease.” On 21 October 2012, Catherine was elevated to sainthood and became the first North American Aboriginal person to be canonised.

Catherine’s story has been told in more than 300 books and 20 languages since her death. These accounts have served not only to spread the word about her cult in Canada but also in the United States and around the world. Patron saint of the environment and of Aboriginal people, her intervention is called upon in cases of illness.

Conserved in a sanctuary in Kahnawake, her relics are the object of veneration. In the province of Quebec two churches are named after her, one in the Innu community of Mashteuiash in the Saguenay Lac St. Jean region, the other in the Innu community of Uashat Mak Maliotenam near Sept-Îles. A statue of Catherine stands in the Basilica of Sainte-Anne-de-Beaupré. She was also featured in Montreal author Leonard Cohen’s novel Beautiful Losers (1966).

While Canadian Catholics see this sainthood as a source of pride, others view Catherine Tekakwitha as a powerless victim of colonialism. It is true that in the numerous biographies written about her, authors often give more pages to the legend than to the historical context. In a period when the Catholic Church wanted to encourage the conversion of Aboriginal peoples, her mysticism and piety made Catherine a model to follow.