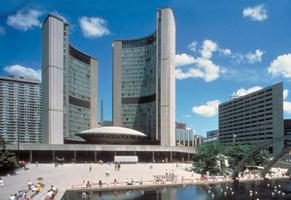 The design and architect of Toronto's new City Hall were chosen in an international competition (photo by Tibor Bognar).

As soon as it opened on 13 Sept 1965, Toronto's New City Hall became an identifiable and unique civic symbol. One of Toronto's most famous landmarks, the building helped to legitimize modern architecture and was noted for its experiments with 20th century building technologies.

The design of the City Hall was chosen through an international competition, which attracted more than 500 competitors from 42 countries. Five architects were appointed as judges in 1957; they awarded the project to Viljo Revell (1910-64) of Helsinki, Finland, feeling his overall composition clearly and dramatically expressed the major functions of civic government.

Under the regulations of the competition, any successful competitor who was not a member of the Ontario Association of Architects had to join together with a local firm. In October 1958, Viljo Revell entered into a partnership with John B. PARKIN Associates of Toronto.

Sited opposite the Old City Hall (built 1889-99, E.J. LENNOX), which had been deemed insufficient to meet the needs of the rapidly expanding city by the mid-20th century, the New City Hall at 100 Queen Street West was laid out over 12 acres of land and contained 4 distinct elements - a podium, the council chamber, 2 office towers and a civic square. While it was the fourth building to serve as the City Hall of Toronto, it was the first to incorporate the tradition of a "town square."

Each of the 4 architectural components served specific programmatic functions. The two-storey podium was designed with the public areas on the first floor and the governmental offices on the second floor. The council chamber, which appears to float above the podium, was designed as a low-domed, saucer-shaped structure. The crescent-shaped office towers, which partly envelop the council chamber, accommodated the civil servants. Solid, reinforced concrete exterior walls on one face of the tower were juxtaposed with concave steel and glass curtain walls on the other - the west tower (20 storeys, 225 feet across the façade) and the east tower (27 storeys, 325 feet across the façade). The 27th floor of the east tower originally served as an observation deck.

The final component of the integrated design was the public square in front of the building - a grand civic gesture that devoted about ¾ of the site to open space. Named in honour of Mayor Nathan Phillips, who is credited with the vision to initiate the City Hall project, the square is dominated by a large reflecting pool with sweeping concrete arches above. Surrounded by an elevated colonnaded walkway, the square's purpose was to serve as a place for public gatherings of all sorts. A futuristic ceremonial ramp swoops up from the civic square to the roof of the two-storey podium, providing rarely used direct vehicular access to the council chamber above.

Designated in 1991 as a property of heritage significance under the Ontario Heritage Act, the building has also been recognized internationally by DOCOMOMO (Documentation and Conservation of buildings, sites and neighbourhoods of the Modern Movement) Canada.