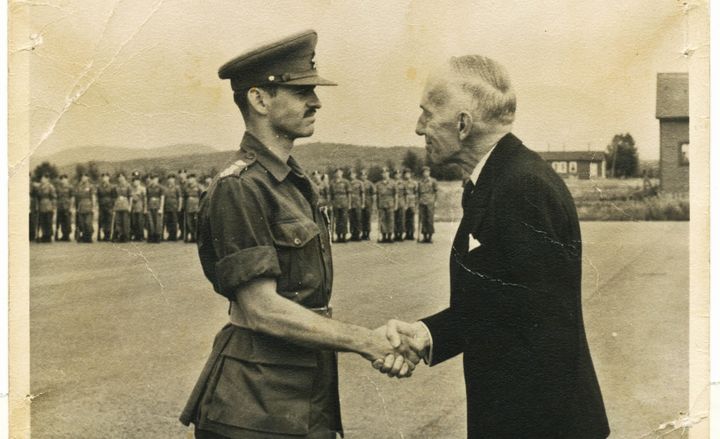 The Korean peninsula was liberated from Japanese occupation by both Soviet and American armed forces, late in the Second World War. The Soviets, Americans, and their Korean supporters could not agree on the country’s form of government. While the UN oversaw democratic elections in South Korea, the Soviet Union forbade them in the North.

North and South Korea Were Established

Pearson Replies to the Invasion of South Korea

Secretary of State for External Affairs Lester Pearson called for a Canadian response to the invasion of the Republic of Korea through the United Nations and under US military leadership.

Canada Expanded Its Presence in the Korean War

By the end of October 1950, thousands of Chinese soldiers crossed the Yalu River into North Korea, driving UN forces back south.

The Canadian HMCS Cayuga and HMCS Athabaskan assisted in the evacuation of 7,700 US troops trapped in the port of Chinnamp'o, on the west coast of the Korean peninsula.

Canadian troops fought at the Battle of Kapyong, which began when Communist forces launched a major offensive on 22 April. For two days, a battalion of roughly 700 Canadian troops (2nd Battalion, Princess Patricia's Canadian Light Infantry) defended a crucial hill against a force of about 5,000 Chinese soldiers.

North Korean and Chinese prisoners rebelled and seized an American prisoner of war camp at Koje-Do (now Geojedo). At the request of the US military, Canadian troops helped recapture the prison. The deployment of Canadian troops without the Canadian government’s consent resulted in a public diplomatic protest to the US government.

In a battle that lasted 33 hours, the Royal Canadian Regiment held its position against an advancing Chinese force. As a result of the action at Kowang-San, soldiers of the Battalion won three Military Crosses and four Military Medals for gallantry.

The Canadian Army’s last major battle of the Korean War was fought, in which the 3rd Battalion, the Royal Canadian Regiment endured constant enemy shellfire and wave upon wave of assaults on their positions.