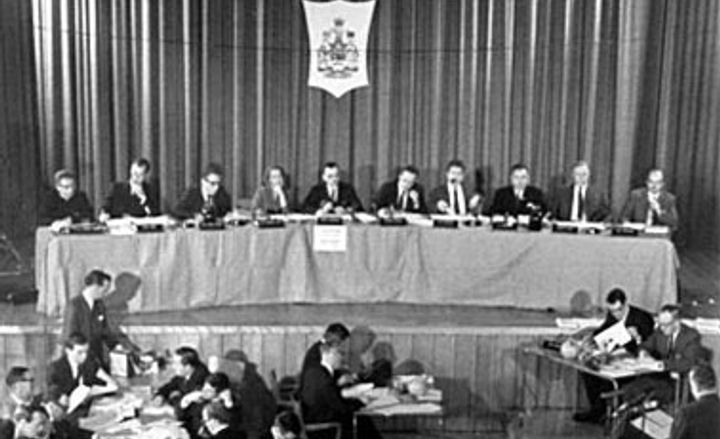 The British North America Act was passed by the British Parliament and given royal assent by Queen Victoria on 29 March. It came into effect on 1 July. The Act joined the colonies of Canada, Nova Scotia and New Brunswick in one federal union. In 1949, Newfoundland becomes Canada’s newest province. In 1999, Nunavut becomes Canada’s newest territory. Its creation establishes self-governance for the region’s Inuit population.

The New Brunswick government passed the Common Schools Act to strengthen and reform the school system. At the same time, it abandoned an informal system of separate schools that had grown up since the 1850s.

The Manitoba School Act abolished publicly funded support for separate schools for Catholics. The aggrieved French minority argued that the Act violated the agreements under which Manitoba entered Confederation.

The Ontario Department of Instruction issued Circular No. 17, which banned the use of French in Ontario schools past Grade 1.

Keith Spicer, first commissioner of official languages and later chair of the Canadian Radio-television and Telecommunications Commission, was born at Toronto.

Elected leader of the NB Liberal Party in 1958, Louis Joseph Robichaud led it to victory over Hugh J. Flemming in 1960, served as attorney general between 1960 and 1965, and as minister of youth in 1968. The first Acadian elected premier of NB, he introduced far-reaching social reforms through the centralizing Programme of Equal Opportunity. His government passed an Official Languages Act, established Université de Moncton, increased Acadian administrative influence, and encouraged the mining and forestry industries.

The Royal Commission on Bilingualism and Biculturalism was announced, to be chaired by André Laurendeau and Arnold Davidson Dunton.

The preliminary report of the Royal Commission on Bilingualism and Biculturalism was tabled in the House of Commons.

The first volume of the report of the Royal Commission on Bilingualism and Biculturalism was released.

The second report of the Royal Commission on Bilingualism and Biculturalism recommended that all children in Canadian schools be required to study the second official language.

Canada signed an agreement with 19 other countries to establish the Francophone International Cooperation Society, for cultural and technological exchange among French-speaking nations.

Canada's multiculturalism policy grew partly in reaction to the Royal Commission on Bilingualism and Biculturalism, which endorsed a "bicultural Canada," barely recognizing "other ethnic groups." This dilemma was partially resolved in 1971 by Prime Minister Trudeau's assertion that Canada was a "multicultural country with two official languages."

The Gendron Report was published, recommending that Québec have French as its official provincial language while maintaining both English and French as its two national languages.

New Brunswick became the first province to draft statutes in both official languages.

Bill 22 made French the language of civic administration and services, and of the workplace, in Québec.

Bill 101, Québec's French-language charter, was passed by the National Assembly.

Québec's French-only sign law came into effect. A part of the original draft of Bill 101, Charter of the French Language, the law stipulated that public signs in Québec were to be in French only.

The Québec Court of Appeal ruled that Bill 101, Québec's language law, violated the Charter of Rights and Freedoms.

The Supreme Court of Canada ruled that the compulsory exclusive use of French on public commercial signs, as per Bill 101, was contrary to the right of freedom of speech. The Bourassa government reacted by introducing Bill 178, reinstating the use of French-only signs.

Bourassa's government adopted Bill 178, an Act to countermand Bill 101. The new Bill reinforced that "public signs and posters and commercial advertising, outside or intended for the public outside, shall be solely in French."

Prime Minister Brian Mulroney launched the Citizen's Forum on Canada's Future, with Keith Spicer as chair, to seek opinions and solutions from the people of Canada on the Constitution.

The Spicer Commission recommended that the government foster a sense of country, that Québec be recognized as a unique province, that there be a prompt settlement of Indigenous land claims and that the Senate be reformed or abolished.

Gérald Godin, poet, journalist, politician and a strong militant for the French language, died at Montréal. He was the minister responsible for enacting Bill 101.

Statistics Canada released the results of its controversial question on race showing that the percentage of Canadians neither white nor Indigenous identify themselves as visible minorities, of whom 27 per cent were Chinese, 21 per cent South Asians and 18 per cent Blacks.

Camille Laurin, psychiatrist, politician and president of the executive committee of the Parti Québécois, died at Montreal. Author of the white paper declaring French as the only official language of government, education and business in Québec, Laurin was known as the father of Bill 101.

A Québec court judge overturned parts of Québec's language law, which rules that French must be the "predominant" language on all signs.

Prime Minister Stephen Harper, on behalf of the Government of Canada, delivers a formal apology in the House of Commons to former students, their families, and communities for Canada's role in the operation of residential schools. Provincial and territorial apologies follow in the years ahead.

Alban Michael, the last fluent speaker of the Nuchatlaht language, died in Campbell River, British Columbia, at age 89. Raised on Nootka Island, Michael spoke only Nuchatlaht until he was forced to learn English at a residential school in Tofino as a child. He nevertheless maintained his fluency in Nuchatlaht so that he could speak with his mother, who did not speak English.

Indigenous Affairs minister Carolyn Bennett announced Canada’s full support of the United Nations Declaration on the Rights of Indigenous Peoples. The Conservative government under Stephen Harper had endorsed the declaration in 2010, but with qualifications that gave Canada “objector” status at the UN with respect to the document. Bennett's announcement removed this status. The declaration recognizes a wide range of Indigenous rights, from basic human rights to land, language and self-determination rights.