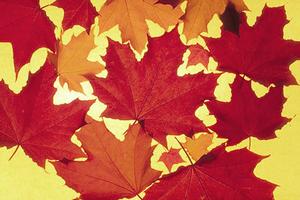 The reds and purples of autumn foliage result from the presence of a group of pigments called anthocyanins. They are responsible for the resplendent reds of maples (Corel Professional Photos). 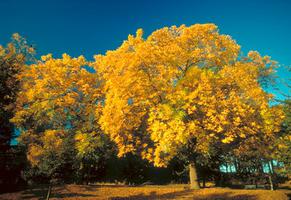 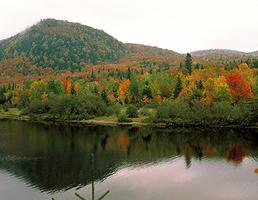 Vibrant colours are one of the delights of autumn in Canada. The transformation from green to yellow, amber, crimson and purple is caused by a fascinating chemical process. Within all leaves there is a blend of colourful substances; temperature, rainfall and length of day determine which of these will dominate in the different seasons.

In spring and summer the most abundant substance in leaves is chlorophyll, which gives them their green colour. Chlorophyll is essential for photosynthesis, the process which converts the energy of sunlight into sugar. Sunlight is also necessary for the synthesis of chlorophyll itself. During summer when the days are long and sunlight is plentiful, chlorophyll is synthesized in a steady, abundant supply, so that throughout the season the leaves remain green. But as autumn approaches and the hours of daylight diminish, the production of chlorophyll slows down. Also, cool autumn temperatures slow the passage of nutrients into the leaves and this further decreases the synthesis of chlorophyll. As the amount of chlorophyll in the leaf decreases, other colourful substances that were always present but had been masked by the green become visible.

One group of substances that shows up once the amount of chlorophyll diminishes is the carotenoids. These colourful yellow pigments confer the Midas touch to aspens and to many other trees such as birch, cottonwood, alder, hickory, maple, sycamore and black cherry. Carotenoids are common in many other living things, imparting the characteristic colour to canaries, corn and carrots, as well as buttercups, bananas and egg yolks. Carotenoids, unlike chlorophyll, do not require sunlight for their synthesis, so they are unaffected by the shortening days of autumn and their colour dominates with the disappearance of chlorophyll. An example of how carotenoids do not need sunlight is seen in the yellow colour of grass that has been temporarily shaded from the sun by a piece of wood or a rock.

One of the most colourful habitats in Canada is the bog. A bog is a type of wetland in which sphagnum moss is the principal plant cover (see Swamp, Marsh and Bog). The water in bogs is highly acidic and low in oxygen, characteristics not suited to many plants. Two groups of plants, in addition to sphagnum moss, do thrive in bogs, however- the heath and the larches - both of which sport vibrant colours in autumn. The heath family, which includes blueberries and other woody shrubs such as leatherleaf, bog rosemary, Labrador tea and sheep laurel, turn a vivid crimson in autumn. The tamarack, which belongs to the larch group of coniferous trees, turns from light green to rich, translucent gold. The long, slender needles of the tamarack give its branches a delicate, feathery appearance. Unlike other coniferous trees, the tamarack sheds its needles in autumn.

Yellow autumn foliage is common in the temperate latitudes worldwide, but the vibrant reds occur only in North America, Japan, North and South Korea and northern China. The North American red maple has been introduced into many countries, and selective cultivation has yielded many domestic varieties with such enticing names as October Glory, Red Sunset and Autumn Flame.

The reds and purples of autumn foliage result from the presence of another group of pigments called anthocyanins. These red substances are not present throughout the growing season as are the yellow carotenoids, and only develop in late summer as a result of a change in the metabolic breakdown of sugar. Anthocyanins are responsible for the resplendent reds of maples, oaks, sumac, dogwood, heaths and black gum. They also give the familiar colour to such common fruits as cranberries, plums, grapes, apples, cherries and strawberries. These same pigments frequently combine with the yellow carotenoid pigments to produce the bronze and deep orange hues of other hardwood trees.

Some autumns are not as colourful as others. Drought conditions will cause leaves to fade, turn brown and fall with only a trace of colour. Heavy rains also inhibit the best autumn colour. When hard rains combine with wind, the trees may be stripped of their leaves before they reach their peak. The best conditions are warm, sunny days and cool nights without frost, which contrary to common belief are not necessary for the colour transition and may cause leaves to fall prematurely. Although clear, bright days and cool nights emphasize the reds, these conditions seem to have little effect on the brilliance of the yellows.

Trees shed their leaves in autumn because it is the most economical way for them to survive the winter. While on the tree, leaves continually lose water through surface pores which remain open to absorb carbon dioxide for photosynthesis. Once the temperature becomes too cold for photosynthesis, if the tree retains its leaves it continues to lose moisture with no benefit. Once the ground freezes the tree cannot extract water from the soil to replenish these losses. Also, if leaves were retained they would become heavy in winter with a burden of ice and snow and would probably break off, taking with them important nutrients essential for the welfare of the tree. As it is, deciduous trees drain the minerals and other nutrients from their leaves before they are lost and store them for the next growing season. Coniferous trees do not need to shed their needles in autumn because they are better protected against water loss. Their needles are covered with a thick coating of wax, and their pores can close completely so that no moisture is lost.

The fate of autumn leaves is determined weeks before they are finally snapped from the tree. At the end of the growing season in late summer, a corky layer of cells begins to form at the base of the leaf stem. These cells prevent the passage of minerals, water and other nutrients from flowing out to the leaf. This layer gradually weakens the attachment of the leaf, and eventually the wind snaps the leaf free. A waxy, waterproof substance seals the leaf scar. Over winter the fallen leaves become packed down by rain and snow. In spring they are slowly decomposed by bacteria, fungi, insects and worms and converted into nutrients which can be absorbed again by the tree and so contribute to another glorious autumn harvest of colours.