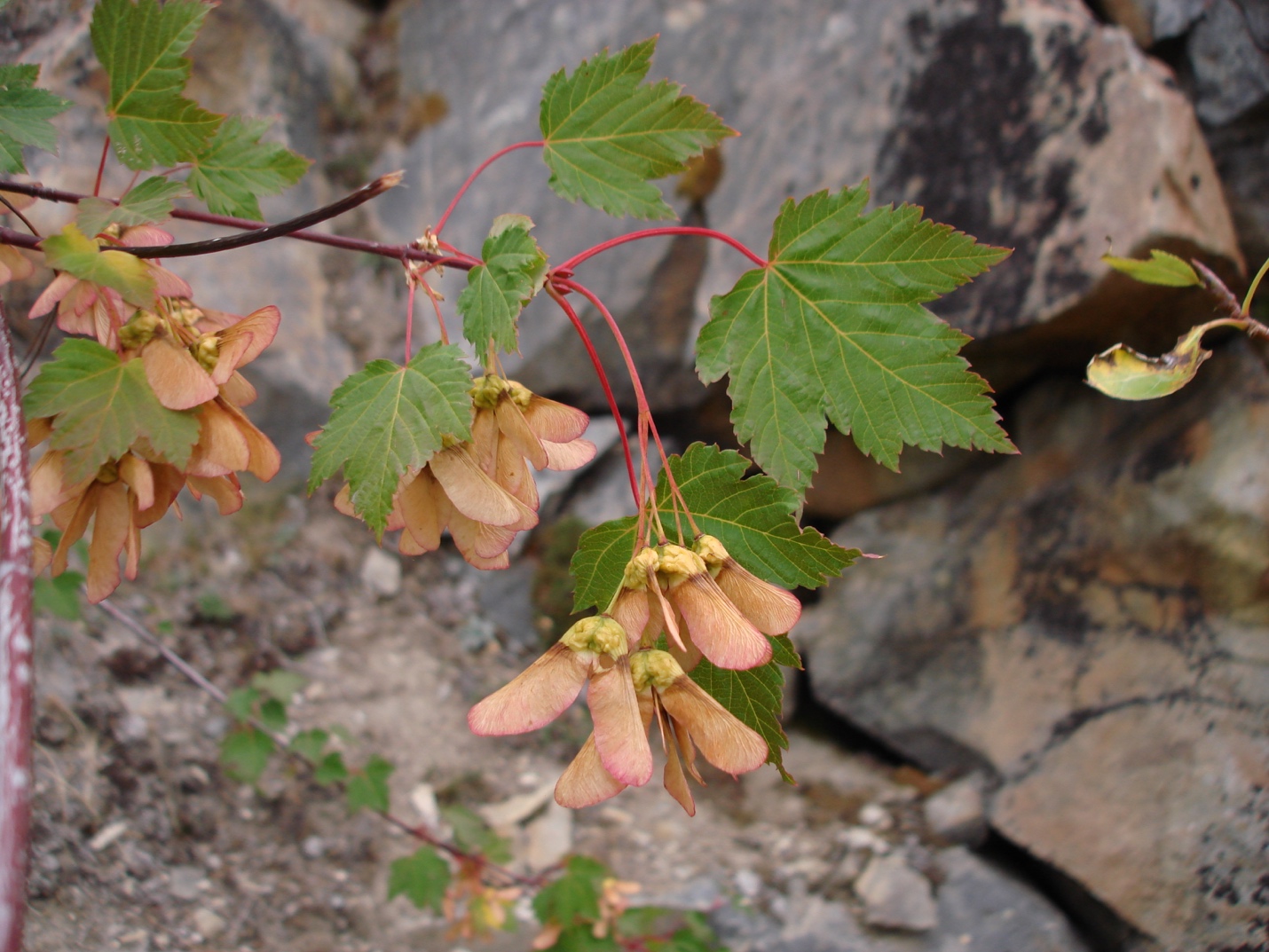 Douglas maple leaves have three to five lobes and their maple keys are paired in a V-shape.

Maples found in Canada range from trees 40 metres or more tall (e.g., bigleaf maple, Acer macrophyllum) to shrubs less than 10 metres high (e.g. vine maple, Acer circinatum, and mountain maple, A. spicatum). Maples are generally deciduous, with light-coloured, straight-grained wood. The leaves grow in pairs opposite one another at the stem nodes. The leafstalks are long and slender, and the blades palmately veined, meaning each has several main veins, all extending from the same point at the base of the leaf. While most maple leaves are single-bladed, with three to nine pointed lobes, the Manitoba maple (Acer negundo) has compound leaves, with three to nine leaflets arranged along a central stalk. 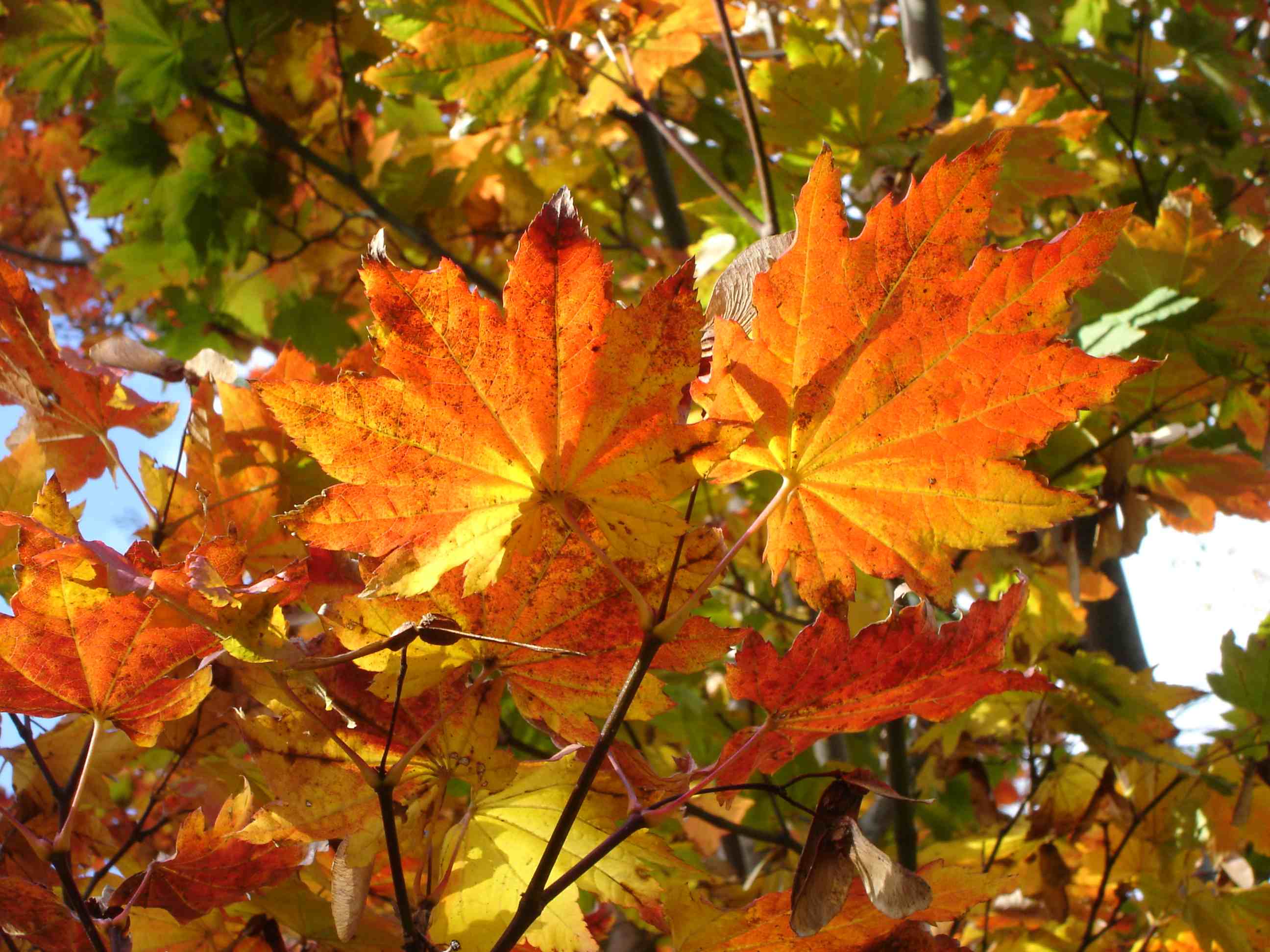 Vine maple leaves have seven to nine lobes and turn bright red or yellow in the fall.

Maples are famous for their brilliant fall colours. Most, especially those celebrated in Canada’s eastern hardwood forests, display brilliant reds and oranges. On the west coast, however, the bigleaf maple, equally vibrant, turns bright golden yellow. The fall colours are due to the production of pigments called anthocyanins (responsible for the red colours) and/or the presence of carotenoids (orange and yellow) in the leaves after the green chlorophyll breaks down.

In spring, the maple leaf-buds start to expand, often at the same time as the tree’s blooming flowers. The flowers, pollinated by wind or by insects, are clustered, whitish to light yellow-green, or sometimes red in colour, depending on the species. Male and female flowers are separate, within the same cluster, in separate clusters, or on separate trees, again depending on the species. The fruits (known as samaras or maple keys) are produced in winged pairs (rarely in threes). Each encloses a seed and is dispersed by wind. The angle between the wings of a maple key varies with different species. 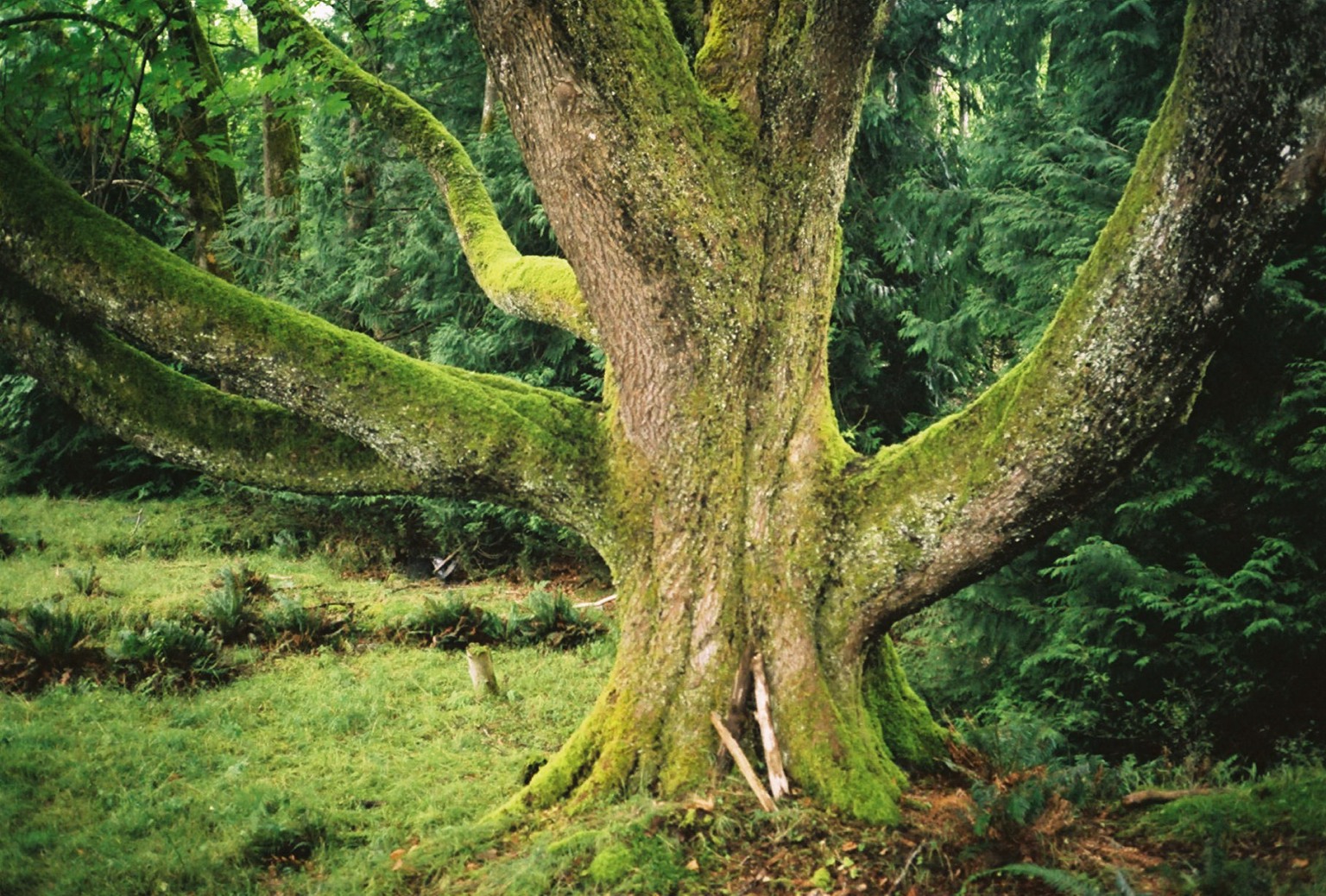 Bigleaf maple trees (Acer macrophyllum) are among the tallest species of maple in Canada, growing 40 m tall or more. 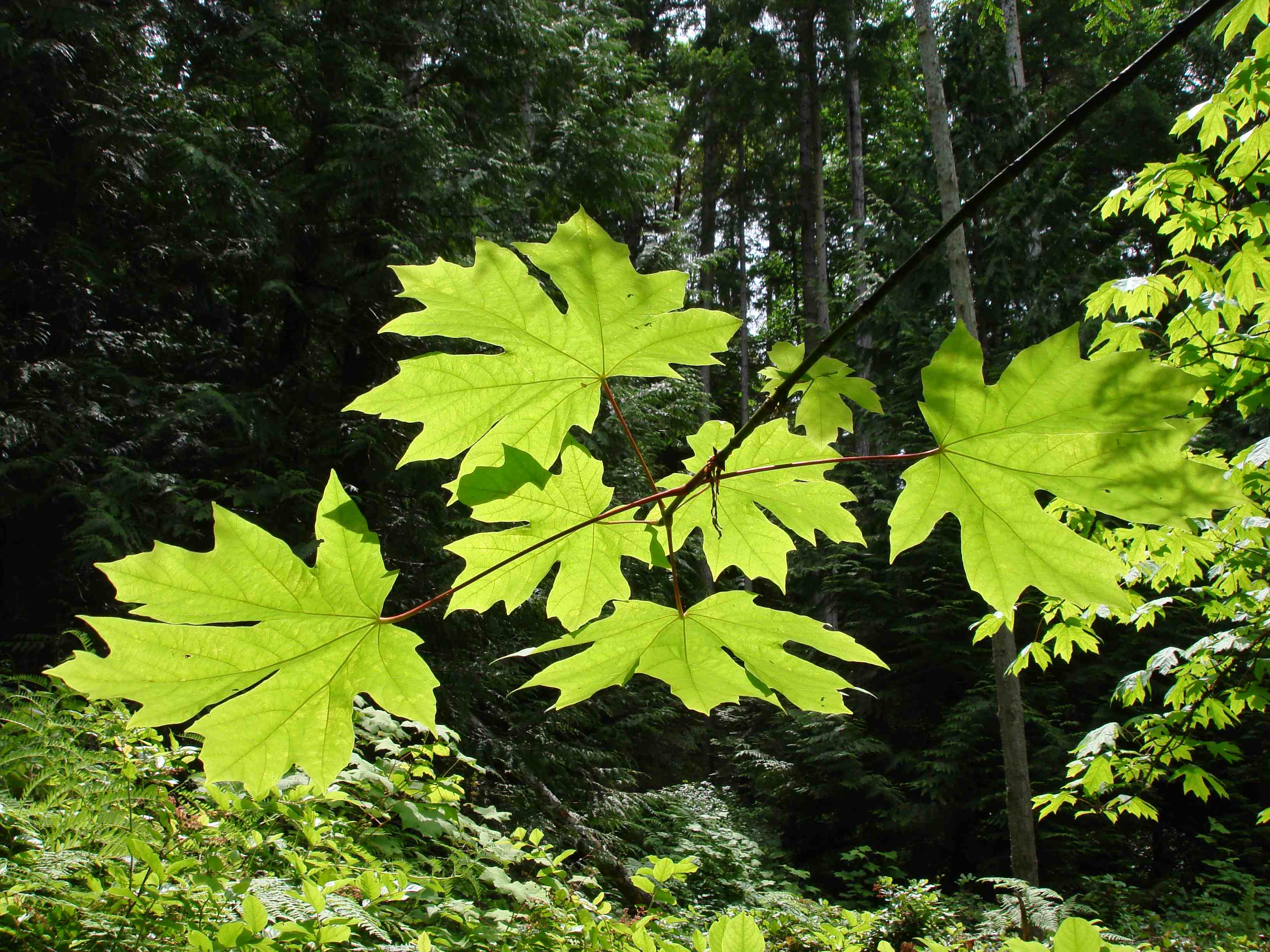 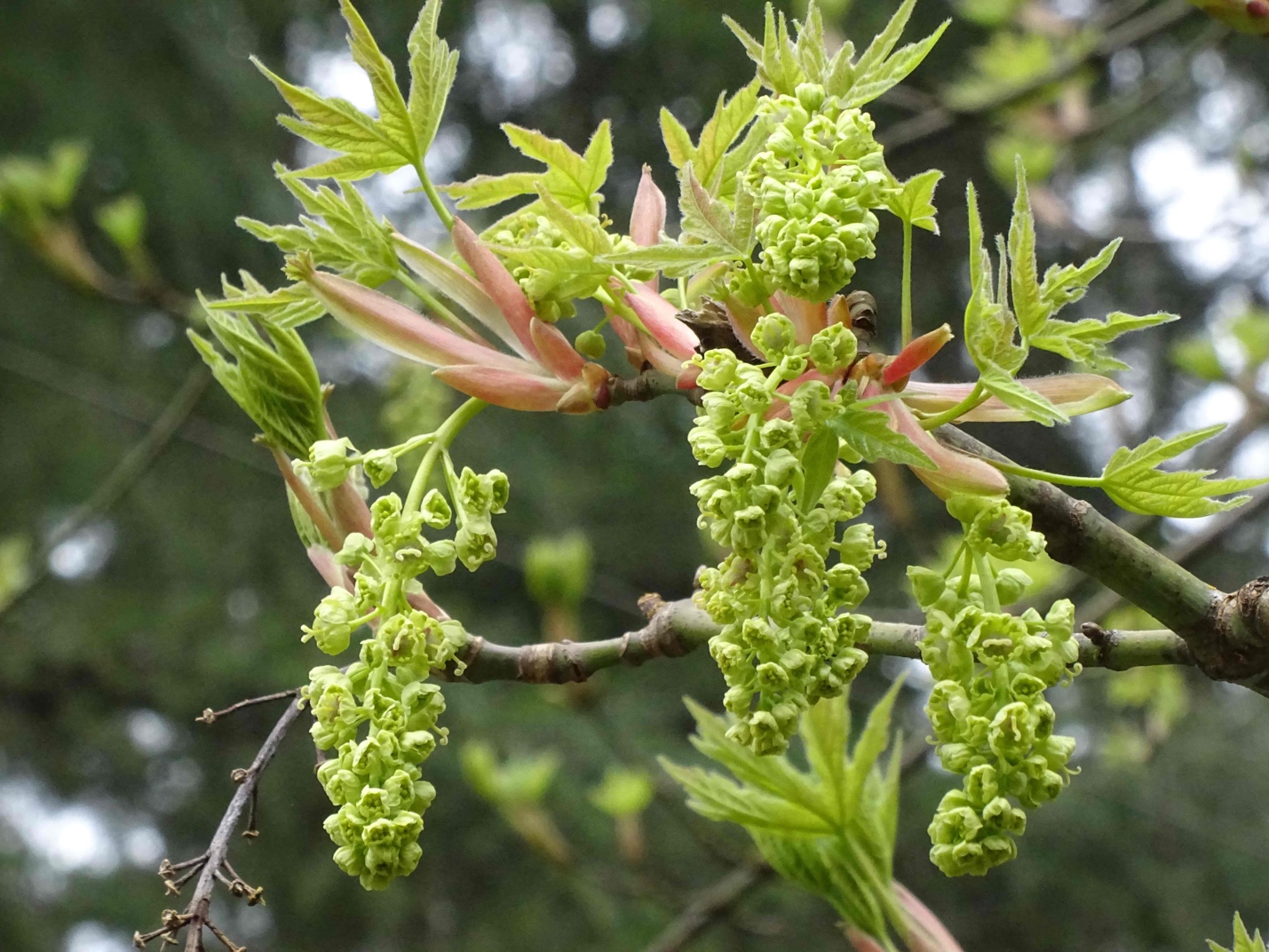 Bigleaf maple flowers are yellowish in colour and grown in drooping clusters.
PreviousNext

Of the 125 Acer species found worldwide, over two-thirds grow in China; 10 are native to Canada, and others are grown as ornamentals, with some (such as Norway maple, A. platanoides), becoming naturalized in parts of Canada. Maples grow in a range of habitats and at varying altitudes but prefer deep, moist, fertile soils. They are a major constituent of many temperate forests.

Maples are important food sources for wildlife; the flower nectar and pollen is sought by bees, flies and other insects. Hummingbirds and other birds also like maple flower nectar. Maple fruits and seeds are eaten by birds, squirrels, chipmunks and mice, and the young twigs and leaves are eaten by deer and moose.

Maples are well known to Indigenous peoples in Canada, and are named in many Indigenous languages. While all maple tree sap contains sugar, the sap of the sugar maple has the highest concentration. It has been used by virtually all Indigenous peoples within the tree’s range, being rendered into syrup and sugar by Haudenosaunee, Anishinaabe, Wolastoqiyik (Maliseet), Mi’kmaq, Innu, and Algonquin as well as various American groups. There is good evidence that Indigenous peoples of the Eastern Woodlands were the first to develop maple sugaring technologies; when Europeans arrived, the First Nations sold large quantities of maple sugar to the fur trading posts. As well as providing sap for sugar and syrup, some maples have edible inner bark that was formerly eaten fresh or dried, or powdered and used as a thickener in soups or as in ingredient in breads.

Maples yield wood used by Indigenous peoples for many purposes, from basketry to fish traps, snowshoes, bows, spear handles, paddles, and spindle whorls. The fibrous inner bark of maples can be turned into baskets, ropes and even clothing, and the large leaves as a surface for laying food on. Maples have also been used medicinally to treat various ailments, from coughs and tuberculosis to dysentery.

Canada is the leading producer of maple syrup and other maple food products in the world, with 90 per cent of Canadian maple syrup production coming from Quebec (as of early 2018). The hard, fine-grained wood of the larger Canadian maples is widely used for manufacturing furniture, flooring, and interior woodwork, as well as for bowls, toys, musical instruments, plywood and veneer. Some trees grow burls and produce wood with contorted grain patterns – known as “bird’s eye maple” – that is in demand by woodworkers. Maple species are also widely grown as ornamental trees on city streets and in yards across Canada, contributing aesthetic beauty, shade, erosion control and surface water management.

Climate change, resulting in warmer, drier weather overall, is perhaps the greatest threat to Canadian maples. As well, insect pests such as the introduced Asian Long-Horn Beetle, have caused significant damage to maples. 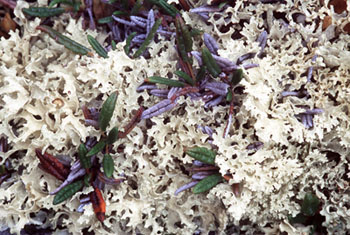