There are more species of insects than any other group in Canada. Most are harmless. Some are beneficial, like the dragonfly, which consumes mosquitoes and pollinating insects. Others, like this colourful beetle, may consume wild or domestic plants (photo by Don E. McAllister). 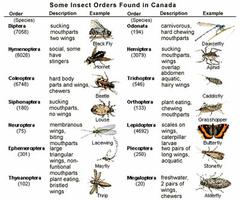 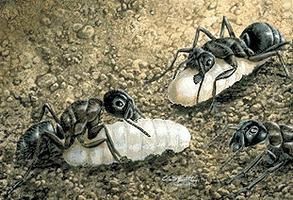 Ants are the most numerous insects. An estimated 12 000 species occur worldwide, about 186 in Canada (artwork by Claire Tremblay).
PreviousNext

Insects are small invertebrates (more than 75% of known species are less than 6 mm long) with 3 pairs of legs, 1 or 2 pairs of wings (or lacking wings) and a segmented body. Wings did not evolve in some primitive insects (Apterygota) and have been secondarily lost in some advanced insect groups (notably fleas and lice).

Although a few species of insects occur in fresh water, in the intertidal zone of the seashore, or on the ocean surface, the vast majority are terrestrial. Insects are especially abundant in the tropics but may be found in all except the most extreme latitudes and altitudes. For example, about 300 species (mostly flies) live north of the 75th parallel on the Queen Elizabeth Islands. A few species even occur in Antarctica, as parasites of birds or seals.

The diversity of insects is staggering: the one million recorded species are estimated to represent only 10-50% of the world total. In Canada, nearly 30 000 species have been described out of a total of about 55 000 species estimated.

Insects owe their success to their adaptability and to their long and varied evolution. Critical to the evolution of the group was a light, wax-covered (hence waterproof) cuticular external skeleton (exoskeleton), which allowed them to take up life on land. They were among the first terrestrial animals and thus faced little competition for the numerous and varied niches that were available. Their small size enables insects to hide easily from predators and to feed on scarce materials. Smallness, together with flight, facilitates dispersal by wind into new habitats, leading to geographic isolation of populations and ultimately to the evolution of new species. Reproductive capacity and life history have also been important. The production of large numbers of eggs, combined with short generation time, has enabled insects to adapt rapidly to changing environments.

As arthropoda, insects possess an exoskeleton. Their segmented body is basically divisible into 3 regions: head, thorax and abdomen. The head is the feeding, sensory and nervous centre; it bears mouthparts, antennae, eyes and, internally, brain and other clusters of nerve cells (ganglia). The 3-segmented thorax is the locomotor centre with, in most insects, 3 pairs of legs and paired wings on the second and third segments and, internally, segmental ganglia. The abdomen, which shows the segmental pattern most clearly, is where metabolism and reproduction occur.

Primitive mouthparts are of the chewing type, as in grasshoppers and beetles, but frequently they are modified for feeding on liquid food as in the housefly (sponging), moths and butterflies (siphoning), and mosquitoes and aphids (piercing and sucking) or for nonfeeding purposes such as defence (mandibles of soldier termites). Legs may also take on other functions, including jumping (hindlegs of fleas and grasshoppers), swimming (hindlegs of water beetles), prey capture (forelegs of mantis), attachment to host (forelegs of lice) or to mate (forelegs of diving beetles), digging (forelegs of mole crickets), sound production (hindlegs of many grasshoppers), and food collection and storage (legs of worker honeybees). The wings may be modified for protection (forewings of beetles, or elytra), camouflage (many moths), gyroscopic control (hindwings of flies, or halteres) and sound production (forewings of crickets).

The colours of insects may serve to conceal them, to frighten predators or warn them that the insects are distasteful, to facilitate intraspecific or sexual recognition, or to aid in heat regulation. Generally, colour is determined by specific pigments in the body wall. However, the iridescent colours of many beetles and butterflies result from the layered nature of the cuticle in the exoskeleton, which reflects light of differing wavelengths. Some insects living in the nests of social insects mimic their hosts' appearance and behaviour to obtain food. Many edible butterflies are left unharmed by birds because they resemble other species that are distasteful (eg, the edible viceroy butterfly mimics the inedible monarch).

Insects have an array of sense organs. Movable hairs of varied sensitivity, responsible for touch and perception of air currents, are generally distributed over the body, but are especially common on the antennae, mouthparts and lower leg regions (tarsi). In grasshoppers, crickets, cicadas and many moths, large concentrations of these very sensitive hairs form specialized hearing organs capable of receiving sound waves. Fixed hairs, which function as organs of taste and smell, are also abundant on the mouthparts, antennae, tarsi (flies taste through their feet) and egg-laying structure (especially in insects that lay their eggs in the body of other insects). Most adult insects have a pair of compound eyes, made up of a large number of identical photosensitive units. Insects do not see clear images; rather, the eyes are designed to detect the slightest movements. Many insects can also perceive distance, colour and polarized light (used in navigation).

Integration of activities both within and among insects is achieved by nervous and chemical means. Reflex nervous pathways arising in segmental ganglia initiate movements of individual legs and wings. However, the coordinated activities of these appendages that result in walking, running, and flight are controlled by the brain.

Some nerve cells within the brain and elsewhere are modified to produce hormones. The effects of these hormones, together with secretions from other endocrine centres, are comparable to those of vertebrate hormones and serve to co-ordinate processes including reproductive development and behaviour, metabolism, urine formation and caste determination in social insects.

Most species lay eggs, coated with a waterproof layer to prevent drying. The eggs may be deposited on or in food, in cracks or crevices, in the ground, or in a special container (ootheca) for added protection against parasites or predators. Females of some species (eg, aphids), under certain conditions, reproduce without fertilization. A few species give birth to larvae.

Three types of postembryonic development occur in insects: no metamorphosis, partial (or incomplete) metamorphosis and complete metamorphosis. Primitive apterygoes (wingless insects) such as silverfish do not change their appearance significantly at each molt. At a certain size they become sexually mature, but continue to molt even as adults.

Among pterygotes (winged insects, although some may be secondarily wingless) 2 groups occur, each with a distinct form of development. Insects with externally developed wings (eg, grasshoppers, bugs, dragonflies and cockroaches) undergo partial metamorphosis where the young increasingly resemble the adult, notably in development of external wing buds. At the final molt, fully formed wings are exposed.

Complete metamorphosis occurs in insects with internally developed wings such as butterflies and moths (Lepidoptera), beetles (Coleoptera), flies (Diptera), and wasps, bees and ants (Hymenoptera). A striking change in appearance occurs from the juvenile to adult stage, the 2 being separated by a third stage, the pupa.

The evolution of a pupal stage between larva and adult has permitted specialization of the life history such that the primary function of the larva is accumulation of food reserves; those of the adult are reproduction and dispersal. For many insects, the pupa has developed into a highly weather-resistant stage which, together with the restriction of feeding activity to the larva, has enabled these insects to colonize habitats where conditions are suitable for development only at limited times of the year.

Insects inhabiting regions (including most parts of Canada) where adverse conditions regularly occur (eg, lack of food, and temperatures unsuitable for growth and reproduction) survive by becoming dormant. Dormancy may occur at any stage in the life history, the stage varying with species. Thus, many grasshoppers overwinter in the egg stage; some damselflies survive as larvae frozen in ice; many butterflies and moths overwinter as pupae; and some mosquitoes survive as adults. Usually the overwintering stage is laid in or seeks out locations where conditions may not be so extreme, eg, under leaf litter or bark, in soil or in holes in the ground. In addition, some species develop special molecules that act like an antifreeze and prevent frost damage. An alternative strategy is migration; using wind currents, some insects may migrate several thousand kilometres to more suitable conditions.

About 75% of all insect species are plant-feeders and play important roles in ecosystems, in particular between producers (plants) and second-order consumers (those animals that prey on insects). Others are carnivorous, omnivorous, or parasitic on other animals (including insects). Less than 1% (perhaps 10 000 species worldwide) constitute insect pests, which cause disease or death in humans and livestock (eg, mosquitoes) or massive damage to agricultural and forest products (eg, pine beetle), and manufactured goods. However, the value of beneficial insects, through pollination (especially, bees), biological control (eg, wasps), and production of honey, beeswax and silk, outweighs several fold the harm caused by pest species.