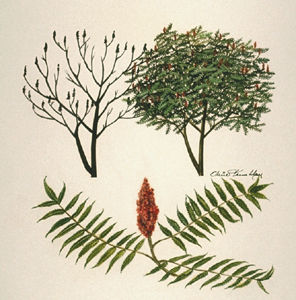 In eastern Canada, the most familiar species is staghorn sumac (R. typhina), so named because its hairy twigs resemble stags' horns. The red, hairy fruits of this species can be made into pink "lemonade" by bruising them, straining the acid water and adding sugar.

Fragrant sumac (R. aromatica) is a small, nonpoisonous, thicket-forming shrub about 1 m tall. Poison sumac (Toxicodendron vernix), despite its common name, is more closely related to poison ivy than it is to other Rhus species. This 5 m tall shrub, is extremely poisonous; contact results in the dermatitis associated with poison ivy. In Canada poison sumac is distributed in southern Ontario and southern Quebec. Smooth sumac (R. glabra) is most common in British Columbia and extends to Ontario. It resembles staghorn sumac but has smooth twigs.