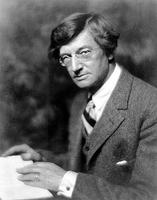 Bliss Carman, poet, editor, journalist (b at Fredericton 15 Apr 1861; d at New Canaan, Conn 8 June 1929). Of Puritan New England and loyalist descent, he attended University of New Brunswick and Edinburgh and Harvard universities. In 1890 he joined the editorial staff of the New York Independent, introducing Canadian poets to its readers, and later worked on Cosmopolitan, Atlantic Monthly, Chap Book and other literary journals. With Low Tide on Grand Pré (1893) and the 3 volumes of "Vagabondia" poems (1894-1900), Carman won international recognition. Some of his best-known work appeared in The Pipes of Pan (5 vols, 1902-05). His collected Poems (2 vols, 1904) and Sappho (1905) contain almost all his best lyrical output.

Carman conducted a syndicated newspaper column, essays from which were reprinted in 3 volumes, notably The Kinship of Nature (1903). With Mary Perry King, he collaborated on The Making of Personality (1908) and in that year moved to New Canaan. With Mrs King he wrote Daughters of Dawn (1913) and Earth Deities and Other Masques (1914). Suffering from tuberculosis, he spent many months during 1919 and 1920 in sanitaria. Upon recovery, he embarked on reading and lecture tours of Canada and the US which brought renewed popularity. In 1928 he was awarded the Lorne Pierce Gold Medal by the Royal Society of Canada. Carman's prose works reflect his wide interests but are otherwise undistinguished. As an inveterate letter writer, however, he did develop a lively, epistolary style, and he achieved in his best verse a few finely wrought lyrics of enduring quality.