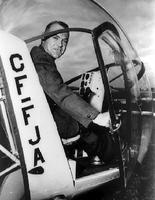 Carlyle Clare Agar, helicopter pioneer (b at Lion's Head, Ont 28 Nov 1901; d at Victoria 27 Jan 1968). In 1905 Agar moved to Edmonton, where he was educated and where he learned to fly. He joined the RCAF in 1940 and was awarded an Air Force Cross for contributions as a flight teacher. He attempted to set up an air service in Penticton and Kelowna, BC, and in 1947 flew the first commercial helicopter into Canada, spraying orchards with insecticide. He perfected helicopter flying in mountainous terrain and carried out aerial surveys.

In 1949 he airlifted construction material, equipment and personnel to the mountainside Palisade Lake Dam. In 1951 he performed a similar task for the Aluminium Co of Canada's giant smelter complex at Kitimat, BC. His company, Okanagan Air Service, became one of the largest commercial helicopter operations in the world. He was awarded the MCKEE TROPHY in 1950.