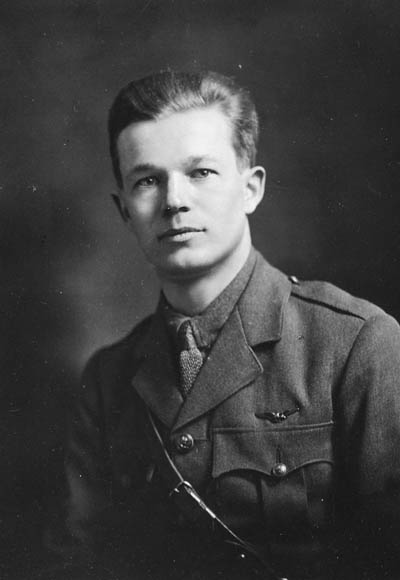 Brown was one of five children (two girls and three boys) born to Mary Elizabeth Brown (née Flett) and her husband James Morton Brown, a flour mill and power company owner. He attended school in Carleton Place and then studied accounting at a business school in Ottawa. He was then invited by an uncle to Edmonton, Alberta, where he completed high school. While in Edmonton, he became friends with Wilfrid “Wop” May, who would also become a pilot.

In the summer of 1915, Brown returned to Carleton Place. He applied to join Britain’s Royal Naval Air Service (RNAS) but was told he first needed a private pilot’s license. The nearest Canadian flying school was full, so he attended the Wright School of Aeronautics in Dayton, Ohio.

On 13 November 1915, Brown obtained his pilot’s license. He enrolled in the RNAS and sailed to Britain. On arrival, Brown was sent to RNAS Station Chingford in northeast London to learn the fundamentals of military flying and dropping bombs.

On 2 May 1916, Brown crashed a training airplane. At first he appeared to be uninjured but the next day discovered he had a broken vertebra, which required two months hospitalization. He was then posted to Eastchurch Gunnery School in September, followed by advanced training in January 1917.

In March 1917, Brown was posted to No. 9 Naval Squadron, which flew patrols in Sopwith Pups along the Belgian coast. The squadron’s main task was to defend Royal Navy ships. Brown was injured again and did not recover until May.

Brown was next posted to No. 11 Naval Squadron, where he flew a variety of Sopwith aircraft from the Frontier Aerodrome near Ostend, Belgium. German flights had increased, and aerial combat, known as dogfights, became more frequent.

On 17 July 1917, Brown scored his first victory when he downed a German Albatross DIII. Promoted to flight lieutenant, he went on to score three more victories. They were unconfirmed, however, and did not become part of his official total.

In mid-August, No. 11 Squadron was disbanded, and Brown went to No. 9 Squadron. He scored his second official victory on 3 September 1917, flying a Sopwith Camel, while his fifth “kill” on 13 October made him an ace. All subsequent victories were made flying Sopwith Camels.

On 2 November, Brown was awarded the Distinguished Service Cross (DSC) for his aerial victories and for aiding a fellow pilot under attack by four German aircraft, even though his own machine guns had jammed.

On 1 April 1918, the RNAS and the Royal Flying Corps merged to become the Royal Air Force (RAF). Brown’s rank became captain, and the unit was renamed 209 Squadron and relocated to the Somme area. A few days later, he shot down two more enemy aircraft, bringing his tally to nine.

On the morning of 21 April 1918, Brown and other pilots in 209 Squadron became involved in a dogfight with a German squadron including top ace Manfred von Richthofen and his cousin, novice pilot Wolfram von Richthofen. The “Red Baron” broke off to pursue Canadian pilot “Wop” May, who was on the tail of his cousin.

Brown saw that his friend May was in trouble and disengaged to attack Richthofen’s red Fokker triplane. By now, the German ace had violated all three of his cardinal rules of aerial combat: never fly alone, low or over enemy lines.

Brown fired a long burst from behind and pulled out of a steep dive to avoid a collision. Richthofen’s Fokker continued over Allied territory and was fired at by British and Australian soldiers until it crashed into a field. Brown received a bar to his DSC for his work since the first award, including shooting down the German ace.

Others claimed to have shot down the Red Baron, including two Australian machine gunners. Despite this, Brown is still officially credited with shooting down Richthofen.

Brown's most famous dogfight was with the German air ace Baron von Richtofen, who was shot down either by Brown or by ground fire.
(courtesy Canadian War Museum)

Brown left the RAF on 1 August 1919 and returned to Canada. He worked in executive positions with the Imperial Varnish and Colour Company of Toronto. On 19 February 1920, he married Edythe Monypenny, the company president’s daughter. They had two daughters and a son. Brown left the company in 1934 to work full-time with General Airways Limited, which he had founded in 1928.

General Airways Limited operated out of Amos, Quebec. It pioneered year-round service to remote mining companies and communities in northern Quebec, Ontario and Manitoba. Brown sold his company when the federal government got into the airline business, and he worked with the Stinson Aircraft Company of Detroit, Michigan.

Brown tried to join the RCAF when the Second World War began but was rejected. In 1943, he ran for the provincial Liberal Party and lost in a landslide. Brown next worked as advisory editor to Canadian Aviation magazine but quit on his doctor’s advice. He bought a farm near Stouffville, Ontario.

Brown died of a heart attack on 9 March 1944, at 50 years of age. He was buried initially in Aurora, but in 1955, his widow had his remains disinterred, cremated and buried in Toronto’s Necropolis Cemetery. In 2016, a military-style headstone was placed on his grave.

In 2015, Brown was inducted into Canada’s Aviation Hall of Fame. There are several tributes to him in Carleton Place. These include the Roy Brown Society, a Royal Canadian Legion Branch, an Ontario Heritage Foundation plaque, exhibits in two local museums, a park, a wall mural depicting his aerial combat with the Red Baron and a bronze statue in Lolly’s Park.