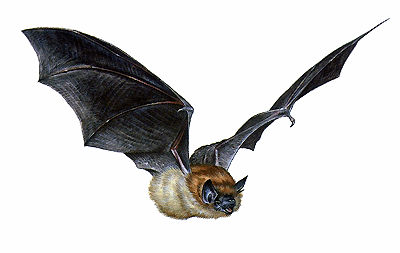 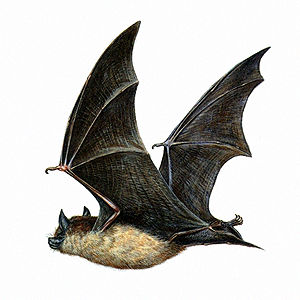 Chiroptera is the order of mammals (Mammalia) that includes all bats, living (~1200 species) and fossil. Among mammals, only the rodents (order Rodentia) have more species than bats. Bats occur almost everywhere in the world except for polar regions and some isolated oceanic islands. Bats are most diverse in the tropics and subtropics.

Bats are the only mammals capable of true flight and their wings are their most obvious specialization. Bats' wings are folds of skin supported by elongated arm, hand and finger bones. Their wing membranes attach to the sides of their bodies and extend onto the hind leg. The hind limb of bats also is specialized with the knee pointing backward and the sole of the foot sole forward. The hind limbs are important in flight, playing a role in maintaining tension in the flight membrane.

While most bats have tails, some do not. The tail may (or may not) be enclosed in the membrane between the hind legs. The faces of bats are often distinctive, typically dominated by large, forward-pointing ears. Bats are small mammals, and adults range in size from a body mass of 2 grams to 1500 grams. The smallest bats, Kitti's hog-nosed bats from Thailand and Myanmar, have wing spans of about 15 centimetres, while the largest, species of flying fox from Southeast Asia have wing spans of 2 metres. As adults, most bats weigh less than 50 grams and, at 30 grams, hoary bats (Lasiurus cinereus) are the largest bats in Canada.

The first fossil bats appear about 52.5 million years ago in the Eocene, a time when there were at least ten families of bats. There are now 19 families, which are placed in one of two suborders, the Yinpterochiroptera or the Yangochiroptera.

Like most mammals, bats have eyes and see quite well, especially under conditions of dim lighting. Many bats also use echolocation (biosonar) to collect information about their surroundings. Almost all of the Old World fruit bats (family Pteropodidae) orient by vision and their sense of smell. Other bats (18 families) use echolocation and their faces are dominated by relatively large (to huge) ears, and some also have noseleafs or other folds of skin around the mouth. The ears and the noseleafs are associated with echolocation, either in transmission of sound (noseleafs, and other folds of skin) or reception of echoes (ears).

Most echolocating bats produce their signals in the larynx (voice box), but Egyptian fruit bats (Rousettus aegyptiacus) use tongue clicks in echolocation. Most echolocating bats avoid deafening themselves to returning echoes by separating pulse and echo in time. These bats cannot broadcast and receive at the same time. A few bats (families Rhinolophidae, Hipposideridae and a mormoopid (of the family Mormoopidae), Pteronotus parnellii) separate pulse and echo in frequency. These bats can broadcast and receive at the same time.

Most bats eat insects and other animals, but everywhere in the tropics there are others that eat plant products (leaves, fruit, nectar and pollen). The most notorious of bats, the vampires, eat only blood. The three living species of vampires occur in the New World tropics, Central and South America. They appear to eat mainly the blood of warm-blooded animals (birds and mammals). Vampire bats weigh 30-40 grams and need about two tablespoonsful of blood every day.

As nocturnal mammals, bats need a safe place to spend the day. While a few species roost in the open, for example in foliage, others retreat to crevices and hollows. Bats of the temperate regions such as Canada eat only insects and survive the winter (a period of no food) by either migrating or hibernating. Hibernating bats require sites where temperatures do not fall below freezing, usually underground locations such as caves and mines. But we still lack detailed information about where many bats hibernate. Although there appears to be a dearth of suitable hibernation sites on the prairies (or in other areas where there are no caves or mines), bats are occasionally active through the winter.

Although some bats roost in large groups, others, perhaps most species, are solitary or spend the day with a few others. The 10 million Brazilian free-tailed bats (Tadarida brasiliensis) that roost in some caves in the American southwest provide an extreme example of the gregariousness of bats. Elsewhere in the world, some other species also occur at high densities.

Bats have remarkably low reproductive rates. In most bats, females bear a single young per year, although eastern red bats (Lasiurus borealis, found in Alberta east to Nova Scotia) occasionally have triplets or even quadruplets. But bats can live a long time, the record in the wild is over 40 years for a mouse-eared bat (Myotis myotis). So although bats are small mammals, their life histories are more like those of large mammals. In some species, most young do not survive their first year, making populations of bats vulnerable to excessive mortality.

Bats are threatened by several things. First, like other mammals, bats are susceptible to rabies, a virus that affects the nervous system. Rabies is typically spread by biting and, individuals showing symptoms rarely survive. Fear of rabies, mixed with apprehension about blood-feeding, gives bats a bad reputation. Second, as insectivorous animals, bats have been exposed to pesticides used to control insects. A new threat to North American bats is the White-nose Syndrome (WNS) caused by a fungus. In 2006 WNS killed thousands of hibernating bats in caves in central New York State. Since then, this contagion has spread widely and wiped out literally millions of bats in the northeastern United States and adjacent Canada. The fungus interrupts the bats normal hibernation cycle, causing them to run out of stored body fat in January rather than in April. WNS appears to have been inadvertently introduced to caves and mines in North America by human visitors who had been in caves and mines in Europe. After its arrival, WNS quickly spread widely through bat-to-bat contact. Species that hibernate underground appear to be most susceptible to WNS.