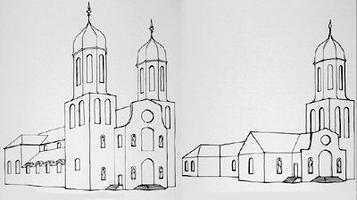 Claude Baillif dit Regnault, masonry builder, architect (b c1635; d at sea, early 1699). The Séminaire de Québec hired Baillif as a stonecutter at La Rochelle, France, in May 1675. He arrived in Canada on 22 September 1675 and left the seminary after 16 months. He was not an ordinary mason; his work and library indicate an educated mind. He contracted to build private homes, churches, gun batteries, a tower for Québec's Notre-Dame cathedral and the bishop's palace.

Colonial craftsmen had to be versatile to survive: Baillif did ornamental plasterwork and drew up plans for churches. His designs were guided by his books on civil and military architecture: Vignola's Les Règles des Cinq Corps d Architecture; Louis Savot's L'Architecture française; Les Fortifications by Chevalier de Ville and other manuals. He had two partners in 1682-83, then worked independently, using his own journeymen and apprentices for labour, while hiring subcontractors.

Baillif and his wife, Catherine Sainctar, lived in a small Lower Town house with 1046 livres (currency) in furnishings and clothes, yet he had 2667 livres with him when he sailed for France in October 1698. A shipwreck in the West Indies forced him to embark on another vessel, on which he died while off St Martin in the Leeward Islands. His mother, sister and brothers in Paris - one an architect - claimed a share in the childless Québec builder's estate.