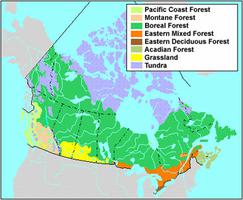 The complex forest ecosystem supports many life forms. The grove is part of the Mixed Forest region and includes both deciduous (eg maple, on the left) and coniferous (centre, with the bear cub) (artwork by Claire Tremblay).

A forest is an ECOSYSTEM characterized by a dense and extensive tree cover. It includes not only TREES but also shrubs, vines, herbs, MOSSES, micro-organisms, INSECTS and higher animals that interact among themselves and with their environment. This complex pattern of life is a system in delicate balance. Natural or man-made alterations may trigger far-reaching and sometimes disastrous changes.

Main Forest Types
Worldwide there are 3 main forest types related directly to climatic zones: equatorial- and tropical-region forests, temperate-zone forests, and forests associated with colder climates. Most of Canada's forest lies within the cold-climate boreal belt extending through Alaska, Siberia, Finland, Sweden and Norway. The BOREAL FOREST is composed predominantly of coniferous trees. In Canada, temperate-region forests extend only in milder areas along the Pacific coast and in southwestern Ontario. In BC the cool, temperate maritime climate supports a forest dominated by CONIFERS. In southern Ontario, a deciduous forest (ie, with broad-leaved trees) has developed as a result of hot and humid summer temperatures. Between this deciduous forest and the cold-climate boreal forest to the north exists a transitional mixed-wood forest, where coniferous and deciduous trees are about equally represented.

Canada's coniferous trees and shrubs (34 species) include 9 species of PINE, 5 of SPRUCE, 4 of JUNIPER, 3 of HEMLOCK, 3 of LARCH, 4 of FIRS, one of CEDAR, 2 of YEW and one of CYPRESS. These are also known as softwoods, evergreens or needle-leaved trees. A mature conifer usually has a straight central trunk and short branches forming a distinctive, tapering crown. With the exception of larches, conifers retain their needlelike leaves for 2 or more years; the leaves are not shed all at once.

There are just over 100 species of deciduous trees in Canada, including 10 of MAPLE, 10 of OAK, 6 of BIRCH, 5 of POPLAR, 5 of hickory, 4 of ASH, 3 of ELM and members of 32 other genera. Deciduous trees, also known as hardwoods, vary considerably in form but often exhibit broad, rounded crowns with branches as long or longer than their short, tapered trunks. With the exception of arbutus, the Canadian broad-leaved trees shed all their leaves annually.

Trees appeared many centuries before the advent of grasses and the age of dinosaurs. According to paleobotanists, plant life originated in a marine environment more than 3 billion years ago. Plants moved onto land only in the late Silurian and early Devonian periods (426-392 million years ago). These first land plants, less than one metre tall, were sporebearers tied to damp environments. The first forests appeared during the Devonian period, between 410 and 353 million years ago. They were heavily stocked with treelike CLUB-MOSSES, which had slender trunks and drooping branches. The earliest fossils of gymnosperms (ie, the most ancient groups of SEED PLANTS) date to the late Devonian (375-353 million years ago). Gymnosperms, of which modern coniferous trees are examples, produce seeds that are not enclosed by an ovary.

At the end of the Devonian period, extensive, shallow ocean flooding occurred within the North American continent. Rivers poured sediments into this sea, producing great swamps from which the monumental forests of the Carboniferous period (353-300 million years ago) eventually sprang. Here, tree-size ancestors of present-day, diminutive HORSETAILS flourished along with FERNS, seed ferns and dominant club-mosses. Some of them grew to over 30 m in height. At the end of the Carboniferous period, these junglelike forests succumbed to major climatic changes. They were buried, compressed and ultimately converted into COAL, which has fuelled a great part of modern industry. During the Carboniferous, gymnosperms predominated at higher elevations. Gymnosperms such as primitive conifers and palmlike cycads subsequently proliferated while numbers of fern and horsetail decreased.

During the Triassic period (250-205.7 million years ago) some plants developed the ability to produce flowers and to encase their seeds inside ovaries or fruits; these were the angiosperms (seeSEED PLANTS). Many flowering trees (eg, WILLOW, poplar, maple, magnolias) and flowering herbaceous plants appeared, and by the end of the Cretaceous period (65 million years ago), angiosperms dominated the floral landscape. Different species of insects, birds and mammals developed in parallel with those plants, drawing upon the forest and helping to sustain and expand it.

About 55 million years ago in the "modern" era of the Cenozoic, a long-term cooling trend began. As it intensified, forests that had thrived comfortably within the ARCTIC CIRCLE were pushed southwards. Then, just under 2 million years ago, all but a minute part of Canada was slowly covered by 4 successive, monstrous ice sheets, sometimes as much as 3 km thick. Great glacial tongues also penetrated deeply into the northeastern US (seeGLACIATION). The advancing ice sheets scoured the forestland, but their slow movement enabled the forest to withdraw each time and find refuge in warmer southern environments.

Following the retreat of the last ice sheets (about 10 000 years ago), re-establishment of the forest began. The first species to move northward were the ALGAE and FUNGI, followed by higher plants, such as mosses, LICHENS and horsetails. These were capable of living on the cold, wet fringes of the land most recently vacated by ice. Next came the hardy gymnosperms: spruces, firs, pines and larches. Finally, the deciduous trees arrived: the oaks, ashes, maples and other species. These slow-moving belts of vegetation present the essential pattern of Canadian forests today.