Canada’s Pacific coast is home to many First Nations. From north to south, these nations include the Tlingit, Nisga’a, Haida, Tsimshian, Haisla, Gitga'at, Heiltsuk, Nuxalk, Wuikinuxv, Kwakwakaʼwakw and Nuu-chah-nulth. Coast Salish peoples, a cultural grouping that includes a number of First Nations, traditionally inhabit the coast surrounding the Strait of Georgia, both on Vancouver Island and on British Columbia’s mainland. For thousands of years, Pacific Northwest Coast First Nations have used sophisticated fishing and sea mammal hunting technology. River-run salmon is an important resource and spiritual symbol.

European explorers, notably the Spanish and British, began to visit BC’s coast in the late 1700s. In 1778, Captain James Cook sailed into Nootka Sound, solidifying Britain’s claim to the region. By the mid-1850s, the Hudson’s Bay Company had expanded west of the Rocky Mountains and set up trading posts. In 1849, Vancouver Island became a British colony (see also Politics in British Columbia). 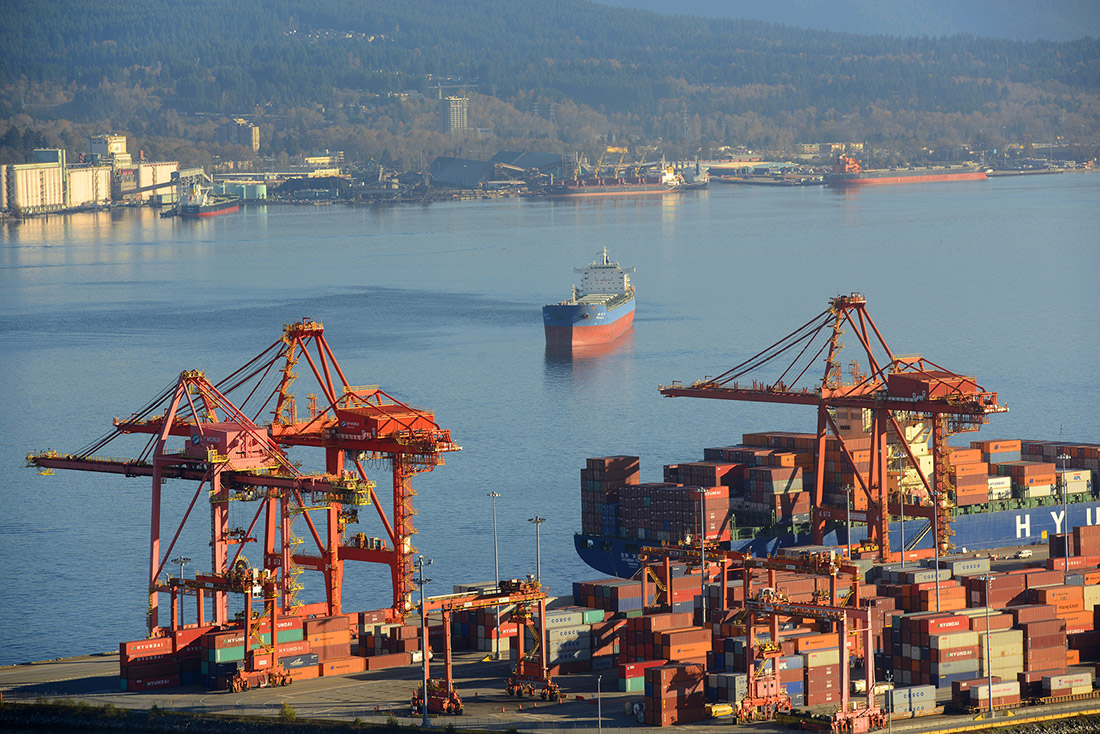 The Port of Vancouver is one of over 70 ports in British Columbia.

BC joined Confederation in 1871. By 1885, the Canadian Pacific Railway was completed, linking the movement of people and resources from the Atlantic Ocean to the Pacific Ocean.

Canada’s Pacific coast is more than 27,200 km long, all within British Columbia. Coastal landscapes range from low-lying deltas to mountainous fjords. The Pacific Ocean watershed extends east from the BC coast to the Rocky Mountains, and north from the American border into Yukon. Many rivers within this watershed flow into the Pacific Ocean, including three major ones: the Fraser, the Columbia and the Yukon. The Fraser is North America’s longest undammed river. Its watershed is an important spawning ground for wild sockeye and chinook salmon. The Fraser is also one of hundreds of rivers to flow into the Salish Sea. The Salish Sea is made up of the Strait of Georgia, Puget Sound and the Juan de Fuca Strait.

Like the coast’s land environment, the Pacific Ocean’s sea floor is enormously varied. Much of it was shaped and continues to be shaped by plate tectonics. Among the features created by plate tectonics are seamounts. Seamounts are underwater mountains, usually volcanoes, that rise from the sea floor. For example, the Bowie Seamount, located 180 km west of Haida Gwaii, rises more than 3,000 m from the ocean’s sea bed.


The Pacific Ocean is also home to hydrothermal vents. These rare geological features form along the boundaries of tectonic plates. They eject nutrients and heated water into the surrounding ocean, making them biodiversity hot spots. The Endeavor Hydrothermal Vents Marine Protected Area is a deep-sea habitat located 256 km southwest of Vancouver Island. 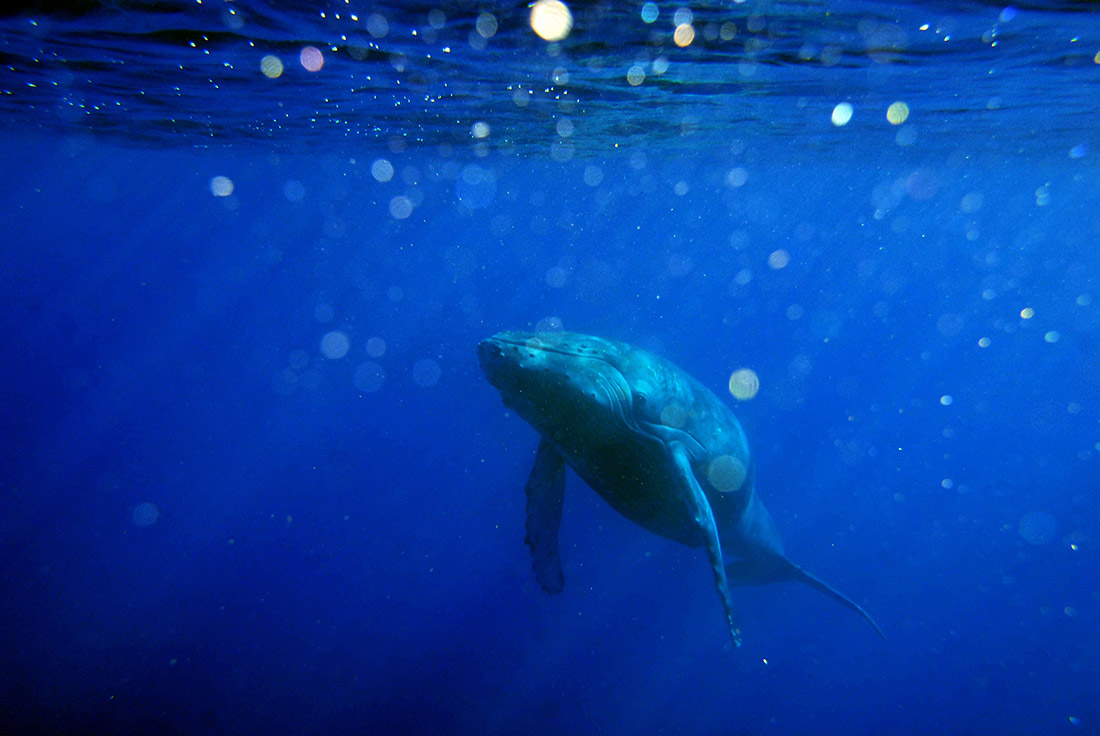 Blue whales live in oceans throughout the world, including off the Atlantic and Pacific coasts of Canada.

Canada’s Pacific Ocean’s warm waters, continental shelves and seamounts support a rich and varied concentration of marine life. Species in these habitats range from the very old, like 9,000-year-old glass sponge reefs, to the very large, like blue whales, the world’s largest animal.

In addition to blue whales, many other whales live in Canada’s Pacific Ocean, including humpback, killer, minke, grey, and Dall’s and harbour porpoise. Other mammals include California and Steller’s sea lions, and harbour and elephant seals. The area is also home to a large range of marine birds.

British Columbia’s salmon-based ecosystems stretch from watersheds far inland to the deep Pacific. The Pacific herring is the foundation of much of the coastal food cycle. Seamounts provide a shallow-water environment in the deep ocean, harbouring sablefish, halibut, many species of rockfish and leatherback turtles. Other marine life is found in hydrothermal vents. As water shoots up through these vents, 15-storey “vent chimneys” become home to giant tubeworms, eyeless shrimp, giant clams and spider crabs.

The Pacific Ocean is an integral part of British Columbia’s economy. Many of the province’s industries depend on the ocean, including ocean tourism, transport and technology and seafood. The ocean transport sector includes the import and export of various goods. This container traffic is handled by the over 70 ports found in the province. The shipping containers may contain such goods as grain, forest products, seafood or cars.

By comparison, ocean technology includes industries that create products and services to help better understand the ocean. These products include autonomous underwater vehicles or ways of using wave and tidal power.

Did you know?
The (UNCLOS) considers the continental shelf that borders a country’s coastline to be a continuation of the country’s land territory. Any country bordering an ocean is allowed exclusive economic rights over a zone extending 200 nautical miles (about 370 km) from its shore.


The seafood industry involves the harvesting and processing of fish, shellfish and marine plants. Historically, wild-caught salmon and herring were the species of fish most important to the seafood industry. However, while these species are still important, aquaculture, or fish farming, is increasingly significant. Farmed salmon, for example, now accounts for more of BC’s salmon harvest than wild-caught salmon.

Growing populations and increased use of Pacific Ocean waters have led to increased impacts from fishing, pollution and climate change. Pacific salmon, for example, face multiple threats, including habitat destruction and unsustainable fishing practices. These threats are compounded by climate change. Salmon are sensitive to higher temperatures, so even small increases in the warmth of oceans and rivers can harm or kill them. When salmon populations are in danger, other members of the ecosystem are also threatened. Orca populations in the Salish Sea, for example, are decreasing. This is in large part because their primary prey, the chinook salmon, are dying off. Orca whales are Canada’s most endangered marine mammal.