Click on the individual dinosaur icons to learn the name of the dinosaur identified at that location, the period during which it lived, as well as other information.

Scientists use the term “Dinosauria” to describe dinosaurs and their descendants. Dinosauria are generally divided into two major lineages: Saurischia (lizard-hipped dinosaurs) and Ornithischia (bird-hipped dinosaurs). Perhaps a little bit confusing is the fact that living birds belong to the lizard-hipped lineage. Scientists have named close to 3,000 species of non-avian dinosaurs. However, there are still thousands of species yet to be discovered. Each discovery, regardless of whether or not it is a new species, reveals new evidence about the relationships between dinosaurs. Because of this, the classification of dinosaurs is in constant flux. 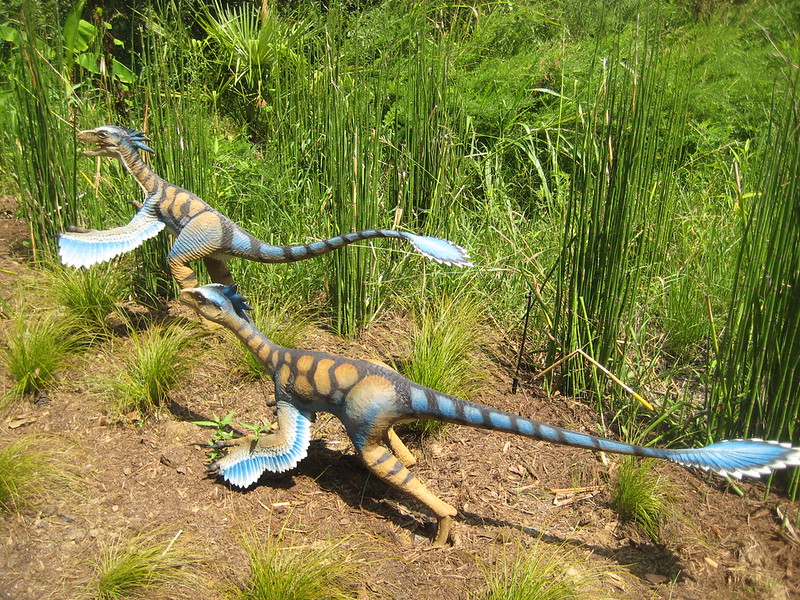 Troodon was a small, carnivorous dinosaur first discovered in Alberta.

Most dinosaurs were active, warm-blooded animals. Many had lengths and weights rivalling even the largest whales. Giant carnivores like Tyrannosaurus rex had highly developed senses of smell, sight and hearing. Their forward-facing eyes gave them binocular, three-dimensional vision. T. rex also had some of the most powerful teeth and jaws of any animal, living or dead. It was capable of biting through both the flesh and bone of its victims.

Species of both duck-billed and horned dinosaurs massed into enormous herds of thousands of animals, probably for the purpose of protection during annual migrations. They were at times followed and hunted by packs of tyrannosaurids like Albertosaurus.

Albertosaurus is one of more than 100 species of dinosaurs discovered in Alberta.

Dinosaurs include some of the largest animals that ever walked the earth. These long-legged animals could walk huge distances. It is no surprise then that many famous dinosaurs, including Tyrannosaurus rex and Triceratops, lived in both Canada and the United States. There were land connections in the Arctic between North America and Asia that allowed dinosaur species to move between the continents, and dinosaurs from western Canada had close relatives in central Asia. These include Saurolophus, a dinosaur first described in Alberta but also found in Mongolia.

Most lineages of dinosaurs died out 65 million years ago. Although still debated by some, the evidence suggests that an asteroid crashed into the Yucatan Peninsula, between the Gulf of Mexico and the Caribbean Sea, at that time. The collision threw so much dust into the atmosphere that it prevented sunshine from getting to the surface, causing a universal collapse of ecosystems. Many plants and most animal species (including all dinosaurs other than birds) did not survive the disruption and went extinct. Smaller animals like lizards, crocodiles, birds and mammals had a better chance of surviving the collapse, and were able to repopulate the planet as ecosystems recovered. Birds are the direct descendants of dinosaurs, and are classified by modern biologists and palaeontologists as a subset of the Dinosauria. Therefore, there are more than 10,000 living species of dinosaurs.

More than 100 different species of dinosaurs have been found in Canada. Almost half of these were collected from Dinosaur Provincial Park, Alberta. During the Cretaceous period, Alberta was warmer than it is today. Rich plant life supported herbaceous dinosaurs, which in turn supported carnivorous dinosaurs. When dinosaurs died, the area’s many rivers quickly buried the skeletons with sand and mud carried by muddy currents. In addition to Dinosaur Provincial Park, there are many other dinosaur sites in Alberta. Dinosaur fossils are collected along most of the major river systems in the province, and even within the city limits of Edmonton and other municipalities. There are many dinosaur footprint sites in Alberta, especially in the foothills. Nests of dinosaur eggs, some with the embryonic remains inside, have been found close to the American border.

Aside from Alberta, British Columbia has a number of dinosaur sites, including some of the richest dinosaur in footprints. Similarly, parts of Saskatchewan have rich dinosaur resources. Dinosaur bones have also been recovered from Nova Scotia, Nunavut, the Northwest Territories and Yukon. However, so far these sites have not produced specimens complete enough to describe as new species.

In 1979, Dinosaur Provincial Park became the first palaeontological UNESCO World Heritage Site. This designation stemmed from the park’s high diversity of dinosaurs and the fact that hundreds of skeletons and millions of dinosaur bones have been found there. Original dinosaur skeletons from the park are on display at the Royal Tyrrell Museum of Palaeontology in Drumheller, Alberta. They can also be seen in more than 30 institutions around the world, including the American Museum of Natural History in New York and the Natural History Museum in London, England.


There are also world-renowned displays of Canadian dinosaurs at the University of Alberta’s Palaeontology Museum and the Royal Alberta Museum, both located in Edmonton; the Philip J. Currie Dinosaur Museum in Wembley, Alberta; the T. rex Discovery Centre in Eastend, Saskatchewan, the Royal Ontario Museum in Toronto; and the Canadian Museum of Nature in Ottawa. Dinosaur research programs are associated with most of these displays. There are also research programs at the University of Calgary and McGill University in Montreal. Dinosaur collecting programs are particularly active in the western provinces. Students come from around the world to be trained and do research on Canadian dinosaurs. New species continue to be found and named on an almost annual basis, but research has largely shifted to focus on developing a better understanding of the biology of these animals. Paleontologists are investigating questions such as, what made dinosaurs successful for so long? How did they maintain their dominance over other land animals for over 150 million years? Research over the last few decades has shown that dinosaurs were much more sophisticated and well-adapted animals than scientists originally thought.