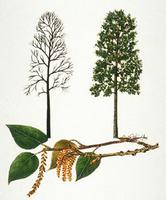 With male flowers (right) and fruits (artwork by Claire Tremblay).

The poplar is a short-lived, deciduous, hardwood tree of genus Populus of the willow family, widely distributed in the northern temperate zone. The genus includes aspens and cottonwoods. In North America, they grow from the treeline to northern Mexico. Forty species occur worldwide; 5 are native to Canada. Aspen (P. tremuloides) and balsam poplar (P. balsamifera) occur across Canada. Hybrids and introduced poplars, such as white or silver-leaved poplar (P. alba) and black poplar (P. nigra), are planted as ornamentals and windbreaks. Leaves are simple, alternate, roundish and toothed. Bark of young trees is smooth, yellowish green, becoming grayish green to brownish and furrowed. Male and female flowers are clustered in drooping catkins on separate trees. 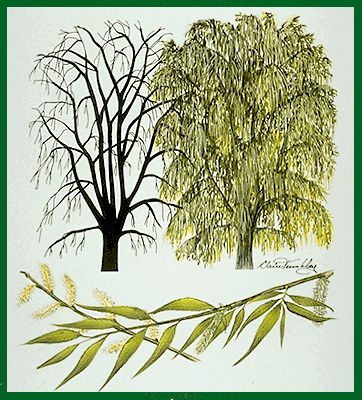